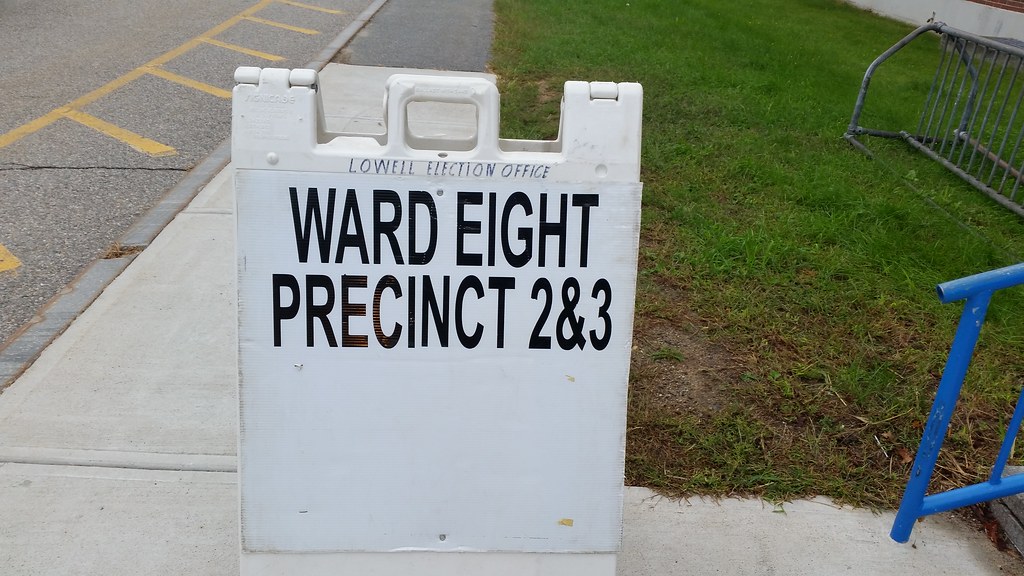 The polls open on Tuesday at 7 am and remain open until 8 pm. On the general election ballot, incumbents come first followed by challengers, each group listed alphabetically.

The names on the council ballot will be listed as follows:

There also is a non-binding referendum on the ballot that asks:

The City of Lowell is reviewing several options for its high school project. Do you support extensive renovation and rebuild at the existing Lowell High location, at 50 Father Morissette Boulevard, Lowell, MA, 01852? YES or NO.

For more information about the election, check out the Lowell Election Office webpage which also contains a specimen ballot, or the website of Lowell Votes which has its excellent 2017 Voters Guide

You shouldn’t have to wait too long Tuesday night to get the results. Former State Senator Steve Panagiotakos will again activate his well-tuned election results operation which will be headquartered at the Blue Shamrock on Market Street.

Procedurally, the official vote count occurs as follows: At 8 pm, the election office personnel at each of the 33 precincts prints a paper slip showing the vote results from that precinct’s voting machine. That slip of paper is then displayed in a public place (usually it’s taped to the inside of an exterior glass door so that anyone outside the building can see the paper and read the results). Election workers accompanied by police officers then bring the voting machines to the election office at City Hall, where the data cards are removed from individual machines and inserted into a computer for tabulation. Once all 33 voting machines are read by that City Hall computer, the official “unofficial” results are known. The purpose of the initial paper slip with the voting results displayed at the polling place is to provide a cross check that should detect any alteration of the machine while en route to City Hall.

What Steve does is send a representative to each of the 33 polling places. Members of that team view the initial results slip displayed at the site and call the results into headquarters at the Blue Shamrock where they are keyed into a spreadsheet. As soon as the thirty-third call comes in, the unofficial results are known, usually before the actual voting machines reach City Hall.

The Blue Shamrock election results gathering will be telecast live by LTC, the city’s public access cable provider (I assume on Channel 8 since the council meeting will be on Channel 99). The results will also be streamed live on the LTC website if you live outside of Lowell or don’t have cable.

To refresh everyone’s memory, here are the results from the September 27, 2017 preliminary election in which 7,680 people voted which was 11.7 percent of all registered voters. Here is the order of finish and the number of votes received:

No endorsements or predictions from me this morning, other than I suspect that turnout will be considerably higher than in a normal city election. For context, in recent city election, 10,000 to 12,000 have voted compared to 22,000 in gubernatorial elections and 32,000 in presidential elections.

This election campaign has been unique in several ways. My memory of Lowell city elections stretches back to 1965, and I don’t ever remember one where a single issue – the Lowell High siting debate this year – was so dominant. The only one that comes close was 1995, when the fight was about whether the city should contribute to the cost of construction of the Tsongas Arena. That issue made the most noise that year, but it was one of many of concern to voters. This year has become completely binary. Candidates are either for Cawley or for downtown. Issues like public safety, economic development, and neighborhood quality of life that have been decisive in recent city elections aren’t even an afterthought this year. (They are, of course, as important as ever, but their exclusion from the campaign stage just illustrates what an atypical election this is).

The second rarity in this election is the embracement of slates by candidates and supporters. Ken Wallace, in his Saturday chat yesterday, said 1963 was the last election in which a slate was open and prominent. One reason candidates have avoided slates comes from our vote-for-nine electoral system. You, as a candidate, want people who have strong allegiance to other candidates to give you one of their nine votes. But if you’re part of Slate A, it’s unlikely that you’ll get votes from those whose primary allegiance is to a candidate on Slate B. This is the same reason that council and school committee candidates rarely attack each other. That’s another way in which this election is different.

The longstanding dominance of the Belvidere neighborhood in city elections is also a big factor this year. Will that dominance continue? That’s an important question, because if the preliminary election results are a reliable indicator, then the residents of Belvidere overwhelmingly want the high school to remain downtown.

Why is Belvidere so dominant in local elections? It’s not as simple as saying, “they vote,” although that is a factor. A big part of it is demographics and the way we organize the city for election purposes. There are 33 precincts in the city. Every ten years, after the US Census is complete, the city reorganizes its precincts to ensure that the number of people living within each precinct is roughly the same (between 3100 and 3400 people). That’s 3100 human beings, not 3100 registered voters. In every precinct, some of those 3100 human beings are not eligible to vote. They might be too young, or they might not be US citizens. So in precincts that are younger or more diverse or both, fewer people are eligible to vote.

So before you even get to who actually votes on election day, the system already has provided the 3100 people who live in that Belvidere neighborhood with twice as many eligible voters than it does the Lower Highlands neighborhood. Then on election day, if the eligible voters in Belvidere turn out at 60 percent, while those eligible in the Lower Highlands turn out at only 30 percent, the existing disparity is magnified.

Which brings us to the third unique aspect of this election. Because Belvidere is where the voters come from in the largest numbers, council candidates make their best effort to address the issues of greatest concern to the residents of Belvidere. That’s not the case this year. Again, if the preliminary election outcome is a reliable indicator that Belvidere voters are solidly opposed to moving Lowell High to that neighborhood, you have five incumbents and four challengers who are unequivocally in favor of just the opposite.

Another novelty this year is the presence of two political action committees, each supporting one of the previously-mentioned slates. Both of these seem well-funded based on the number of newspaper ads and mailings I’ve seen. And from what I’ve seen on social media about receipts and expenditures (with the caveat that anything you see on social media must come with a huge question mark), it seems that the pro-downtown group has invested heavily in a paid organizer, phone banks, door-to-door canvasing and polling, things that are common for statewide candidates, but rare in local elections. How effective those tactics will be could influence how local campaigns are run in future Lowell elections.

I spent a lot of time above writing about the voters of Belvidere, but what about the rest of the city? The total number of voters in all the other neighborhoods greatly surpasses just that one section. Certainly there are those in every neighborhood who feel strongly one way or the other and will vote accordingly. But I sense there are two other groupings, one likely to support downtown, the other Cawley.

From the beginning, I’ve said the majority of voters aren’t in either the downtown or Cawley camps, they are in the “I don’t want my taxes to go up” category. Which of the candidates is the champion of voters with this as their priority? There really is no one, because none of the incumbents or the challengers has voiced concern about whether the tax payers of Lowell can afford either option for the high school. Yet these voters aren’t going to skip the election or leave the city council section blank. My guess is that because the Cawley proposal prevailed in the June council vote, and because the pro-downtown incumbents have been hammering away at the cost of that proposal ever since, they will win the fiscal responsibility voter. (Of course that same voter is equally likely to vote No on the referendum, because he does not want a new high school period).

The second voter grouping I see is the “new construction is better than renovation” voter. I’ve repeatedly encountered people who don’t have strong feelings one way or the other on the location of the high school and who have resigned themselves to the need for something other than the existing facility. A surprisingly large number of these people have expressed a strong belief that building new from the ground up would provide the best outcome for the city.

I don’t agree with the “new is better than renovation” thinking. Just look at the existing high school in which the 1922 building is solid and desirable whereas the 1980 addition is flawed. The same situation exists just across Arcand Drive where the 1898 Lowell City Hall still stands strong while the 1973 JFK Civic Center begs for demolition or complete overhaul, and where the renovated Pollard Memorial Library, also constructed in 1898, stands as a great symbol of the benefits of restoration of historical buildings.

Beyond just its place in the high school siting debate, the strong hold this “new is better than renovation” attitude has on the community undercuts the accepted Lowell narrative of the past 50 years. To all of those who feel it is self-evident that Urban Renewal’s wholesale demolition of neighborhoods and structures in the 1960s was a huge mistake, and that it was the “Lowell’s future is its past” philosophy that accompanied the arrival of Lowell National Historical Park and the infusion of hundreds of millions of dollars of funds to renovate existing buildings in downtown Lowell that rescued the city from the lingering effects of the Great Depression, many of your fellow citizens haven’t read that chapter, or if they have, they don’t buy it.

Whatever the outcome of this election and of the Lowell High siting debate, it is time for those who value historic preservation in Lowell to regroup and ask why so many in the community are so disdainful of preservation.

That’s it for now. If you haven’t had enough of Lowell politics, please check out the item I posted earlier this morning. It’s a review of the outcome of all city elections over the past twenty-five years. See how often incumbents win or lose, and how the makeup of the council and school committee has changed through the years.