This storm will pack a punch, but it’ll be gone quickly

After a beautiful day on Saturday, things are rapidly going to go downhill Sunday afternoon and into the overnight. . . . Power outages are virtually guaranteed across southern New England. The greatest risk of outages will be on Cape Cod and the islands, but most parts of Massachusetts are under a high wind warning, so watch out for downed trees and power lines.

Above from Meteorologist David Epstein blog post on Sunday morning via boston.com

I saw the warnings, but I can’t say that I was unduly concerned. Wind and heavy rain. At least there wouldn’t be snow like the Halloween storm in 2011 that knocked out our electricity for five days. Falling asleep early Sunday night, the rain had begun falling but the wind was barely noticeable.

That was not the case when I awoke at 1:30 am in total darkness. Power was out and the wind was howling. I lay there waiting for the loud crack that signaled a falling limb or tree. None came, but that’s only because the damage had already been done, as I discovered later.

A school cancellation robocall sounded the wakeup at 5:20 am. There was no power but milk from the refrigerator was still good enough to drink so breakfast cereal was consumed like on any other day. 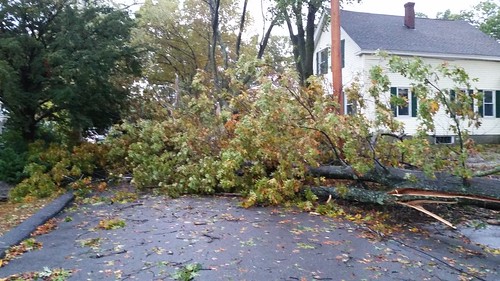 It was only at 7:15 am when I emerged from my front door and headed for my car that I realized it was not just any other day. Two neighbors out in the street pleasantly called out, “You’re not going anywhere.” I joined them at the end of my driveway, looked up the street, and saw a wall of green leaves. A large tree a few houses up had fallen across the road, tearing down wires and barricading us on the wrong end of our dead end street. Another large tree across the way had fallen atop three cars parked in the adjoining driveway. It was a mess. 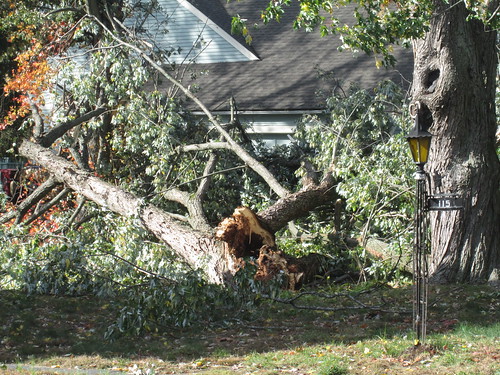 By 3 pm a crew of tree cutters had arrived to slice up the wooden roadblock. They mostly just tossed the big cylinders of the trunk and the heavy branches filled with leaves to one side of the road, opening a pathway wide enough for cars to get past the obstacle. 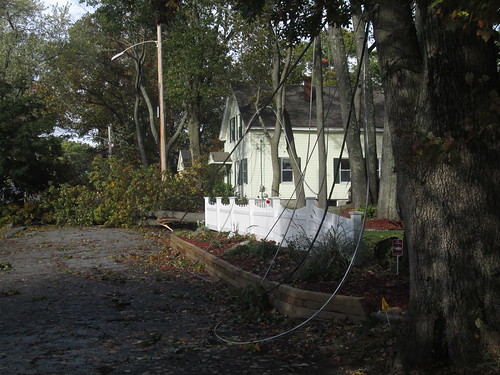 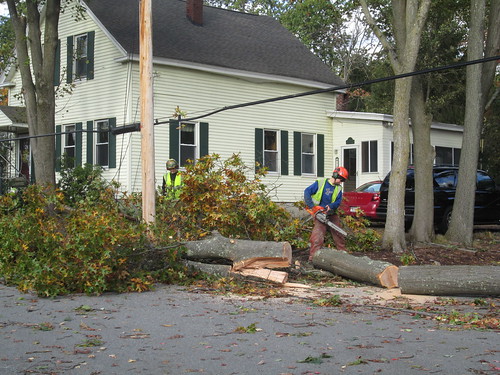 About 24 hours later (Tuesday afternoon) a National Grid truck pulled up to the pole in front of my house. One crew member elevated the bucket, attached something to the super-slack wire that was dangling from the pole, and started cranking. Gradually the wire, a steel cable at the top of the pole I assume to be a ground wire, became taut. He repeated the process for the power line which was next down the pole. His partner then backed the truck up the street to the next pole where the process was repeated. Soon they reached the stretch where the tree had fallen. There, the wires were so askew on the ground that they resembled a turned over pot of cooked spaghetti. That portion took the National Grid crew a while to fix. But they did fix it, and power was restored at 6:30 pm, just as the city council would have normally commenced its meeting (only the council had cancelled its meeting due to Halloween, which in turn was postponed until tomorrow night because of the storm damage). 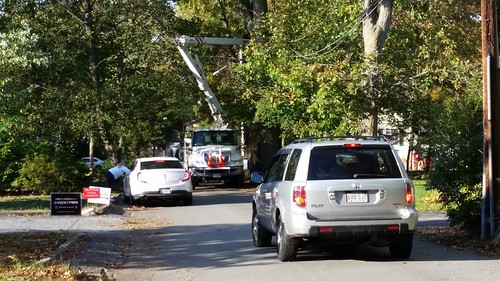 Yesterday afternoon (Wednesday), Comcast’s cable and internet service came back to life. Today, a Verizon truck was roaming the street in search of its damaged wires and equipment.

It seems like things are slowly returning to normal. When it’s over, it never seems as bad as it did when you were going through it. I assume that’s a sentiment shared by many today, because the damage and impact of this storm were widespread. Hopefully it was not a preview of what this winter has in store for us.