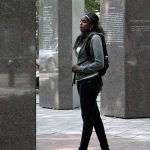 I happened to be at the Kerouac Commemorative public artwork in Kerouac Park at Bridge and French streets yesterday, Jack’s Death Day, where I stopped while guiding a group of 17 arts administration master’s program students from Boston University around Lowell’s historic and cultural district. The flawless blue sky played off the millions of red bricks in the downtown core in the most appealing way. The historic district never looks better than on such days when the sky is the color of blue cat’s-eye glass marbles. We encountered other pilgrims including a couple of thirty-something thin bearded guys from Quebec who were excitedly pulling each other’s arms, saying, Look at this, look at this. After a few minutes I was surprised to see a Marion cousin of mine from central Mass. walk into the sculpture plaza with her poet-husband who was in a college writing workshop with me 42 years ago. It was great to see Robin Marion and Bill O’Connell. They had a younger couple with them, no doubt seeing the polished granite portrait-in-language for the first time. Extending my tour group a courtesy, a half dozen scrappy guys who had been chatting on the stone benches in the middle of the sculpture plaza moved over to the park benches when we showed up so we could make our short visit and talk a little on our own. Everybody was cool.

The BU students knew the Kerouac name, and several had read On the Road, but not more than that. I was not thinking that the day was Oct. 21 when we stopped by. Only the flurry of remembrances on Facebook reminded me how much the “wheel” had turned since the grim day in Florida, 1969. The Kerouac Commemorative will be 30 years old next year. The author’s presence in the community is stronger than ever. A multi-day literary festival named for him drew hundreds of people earlier in the month, as occurs annually. The planners are already brainstorming for 2018, talking about a special poetry event as a feature.

I’m recently back from 12 days in France—Paris, where bookstores and Left Bank book-stall vendors carry French translations of Kerouac and where English versions are available at Shakespeare and Company, which honors JK and all the Beats with a front-of-the-store bookcase crammed with their titles—and then on the Seine River through Normandy, the jumping off point for so many of the French who emigrated to New France/Quebec in the 1600s, the ancestors of the French-Canadian Americans of New England, many of them from Brittany as well. I don’t think I experienced “satori” with my wife in France, but we enjoyed the trip immensely. None of the people or places felt foreign at all, and it was homecoming for me since all my people begin in that place, the DNA showing Viking, Visigoth, and Roman traces—all the rampagers who swung through northwest coastal France—but no mark from the actual Franks of King Clovis days, the fifth century. Kings. In Lowell, we tend not to call Kerouac the King of the Beats because we understand that he didn’t favor that label.

Leaving the sculpture site, my group headed left to Kearney Square still dominated by the former newspaper main office high-rise with the big SUN sign on the roof. One of the students asked, That’s where he had his first writing job, isn’t it?