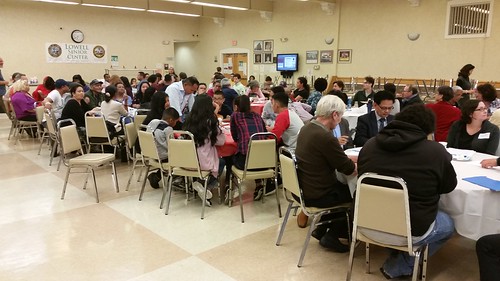 Last evening more than 100 people came to the Lowell Senior Center for an event sponsored by Lowell Votes, Lowell Alliance, Coalition for a Better Acre and Cambodian Mutual Assistance Association. The purpose of the meeting was to update everyone on the status of the lawsuit filed against the city by a number of residents alleging violations of the federal Voting Rights Act of 1965.

Yun-Ju Choi of CBA served as moderator of the event. I was invited to provide a brief history of charter changes in Lowell through the city’s history. (I’ll post those remarks in a separate post in the coming days). 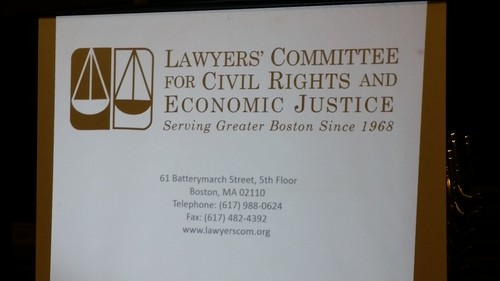 The main speaker was Oren Sellstrom of the Lawyers Committee for Civil Rights and Economic Justice which has worked with city residents to bring the suit of Huot v City of Lowell in the US District Court for Massachusetts. That case challenges the city’s at-large system of electing councilors and school committee members, alleging that it “dilutes the vote of communities of color in violation of the Voting Rights Act and the US Constitution.” For more information on this lawsuit, see the Frequently Asked Questions flyer on the Lawyers’ Committee website).

Attorney Sellstrom explained that lawyers from the Boston firm of Ropes and Gray are representing the twelve plaintiffs in the lawsuit. A hearing is scheduled for Tuesday, September 17, 2017 on the city’s Motion to Dismiss.

The suit is based on provisions of the Voting Rights Act that outlaws “vote dilution” which occurs when an electoral system makes the votes of some people more powerful than the votes of others. If the court finds for the plaintiffs, it can force the city to change its system of electing local officials. The system could be changed by a referendum, but as Atty Sellstrom explained, “when the voting system is broken, trying to change the system by the referendum process doesn’t work.”

To illustrate how the at-large system dilutes the votes of people of color, the audience was shown a graph of demographic change in Lowell over time. In 1980, for instance, 90 percent of the city’s residents were white. In 2000, white residents made up 60 percent of the city’s population. In 2015, the city is 51 percent white and 49 percent minority (22 percent Asian; 18 percent Latino; 7 percent African-American or African); and 2 percent other).

Despite this white/minority balance, 97 percent of those elected in the past five election cycles have been white. A consequence of a system that allows 51 percent of the people to control nearly 100 percent of the outcome of elections, according to Atty Sellstrom, is that “when elected officials know they don’t have to rely on a certain group to get elected, that group gets neglected.”

Atty Sellstrom cited the experience in Springfield, Massachusetts, as evidence that a switch to a partially district-based system “can lead to a much more representative body.” Springfield had a large and growing minority population but no minority office holders in 2005 when a similar Voting Rights lawsuit was filed. As a result of that lawsuit, Springfield switched from an all at-large system to a mixed at-large and district system. As a result, Springfield now has a much more representative local elected body.

After the lawsuit briefing was complete, those in attendance took part in a group exercise that illustrated how the various systems of voting work, and then discussed their own concerns with their table-mates, aided by facilitators from the groups that organized the event. 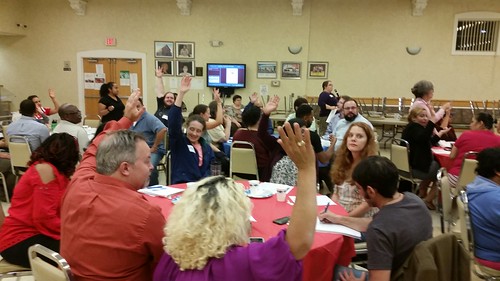 Each table then reported to the full group about their respective discussions. Many questioned what a new system might look like, and who and how districts would be drawn. Another group wants to elect the mayor directly rather than have councilors do it. Another table expressed frustration with the current system, saying “even when we do vote, the same people always win, so we feel there is no point in voting.” Another said the low level of participation in voting is because “people don’t feel represented” and “the current system is undemocratic because everyone knows in advance who is going to win.” One table said that the current system is “hard to understand” and that it is “hard to get information on all the candidates.” Another group said “We don’t question the motives of those in power, but we do question whether they realize what they don’t know about the people they are supposed to represent.” The last group said that the current system didn’t represent the community and that “we are pleased to have lawyers representing us.”

The evening closed with a brief question and answer session with Attorney Sellstrom answering those about the litigation and me answering others about Lowell’s political history.

For those interested in this topic, be sure to check out my past article about the September 20, 2017 meeting of the City Council’s subcommittee on elections and charter change at which many of the same issues were discussed.