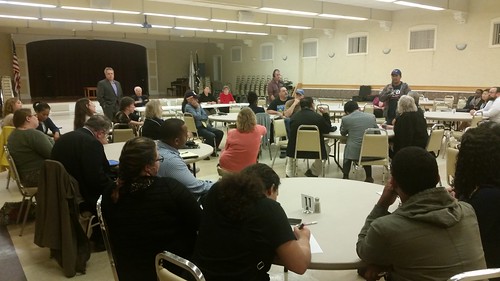 The meeting began with Councilor Leary reviewing how the Plan E form of government has been implemented in Lowell (9 councilors elected at large, councilor elect the mayor, a city manager is chosen by council and is chief executive of the city). He also gave examples of how other cities have implemented the plan (district councilors, proportional voting, mayor elected by people).

City Solicitor Christine O’Connor then gave an overview of the process used to change the charter. There could be an elected Charter Commission which she described as a lengthy and cumbersome process; A change made by the state legislature at the request of the city council; or a ballot initiative (although Lowell’s charter does not specifically provide for such a change by ballot, there is a possibility of changing the charter by that method).

Councilor Samaras echoed Councilor Leary’s remarks and said he was anxious to hear from the 35 or so Lowell residents who were in attendance.

Councilor Rita Mercier said she likes the current system although she would favor the people directly electing the mayor, adding that that choice should not be up to just the nine city councilors. She did say that if there was a referendum and voters expressed a desire to change the charter, she would respect that. (She also added that regarding the choice of a site for a new Lowell High School, she feels that process is too far along to change, so she will not feel bound by the results of the upcoming referendum on that issue). Councilor Mercier closed by saying she feels that the nine city councilors who are elected at large do a good job of representing the entire city.

Councilor Corey Belanger believes that the nine at large city councilors do represent the entire city. He is concerned that a charter change would increase the number of city councilors which in turn would make it harder to get things done. He said there would also be a lot more bickering. “I’m results-based,” he said. He also questioned whether changing the charter would make the council more diverse based on the experience in other places. He closed by saying he is keeping an open mind and is just sharing his concerns.

A number of residents then shared their thoughts:

Bev said that she moved to the city several years ago and “if you didn’t grow up here, it’s really hard to learn about 18 different candidates for council and 12 for school committee. I’ve tried to be an informed citizen by reading voter guides and other literature, but it’s impossible to remember the distinctions when you have that many candidates.”

Paul Ratha Yem (who has run and is running for city council) said it is not easy to run citywide. He spent three months knocking on doors and most people still don’t know who he is. He agrees that district representation would make it easier for the voters, and that the voters in all parts of the city would be better represented if the person they elected lived in their neighborhood.

Judith acknowledged comments by Councilors Mercier and Belanger that they represent the entire city, but added, “that’s only if they call you; not everyone is going to call you.”

Kathleen Marcin (former chair of downtown neighborhood group) said she had been neutral on this issue until she heard the point just made by Judith, and that point has now changed her opinion to favor district representation. She said “I’ve been active in the neighborhood group so I’m comfortable calling City Hall about an issue, but that’s not the same as calling the person who represents me.”

Bob Page said he was pleased with the current city councilors but he said the makeup of the city council disturbs him. He said the Asian community is not represented on the council and it should be. He believes a district system would provide the best chance of that happening.

Thayer said he favored a mix of at-large and district councilors.

Jack Mitchell urged the city to engage the UMass Lowell Center for Public Opinion to do a poll on this issue. He then cited how Kevin Murphy, in his interview to be hired as city manager, spoke of living in the city, walking the neighborhoods, regularly encountering people who live there, as a big benefit. Jack said the same logic shows the benefits of district councilors – they actually live in the neighborhood and would therefore be better able to represent it.

Sam said he was a new resident. He said being a minority candidate (Sam identified himself as Cambodian-American) was a challenge because a minority candidate did not have the kind of “old boys’ network” that is so important to getting elected under our current system. He said the current system makes it easier for “majority” candidates. As evidence of that, he cited the fact that most city councilors all come from the same neighborhood. Sam also favors a strong mayor form of government.

Vladimir Saldana said he grew up in Lowell. “If we change the way we elect local officials, it will make a more diverse result. When you walk through your neighborhood and you pass by your city councilor’s house, that’s an important thing.” He said Lowell is an amazing city, but “equitable inclusiveness” is the way to make it better. He said, “It’s absolutely true that not everyone has the same access to city government.”

Cliff Krieger said he does not favor a mix of district and at-large councilors, but would just district councilors, eleven specifically, one from each ward in the city.

I also took a turn at sharing my thoughts. Here is what I said:

My concern is not so much with our form of government as it is with the low level of citizen participation in that government. When we elect our governor, more than 20,000 Lowell residents vote. When we elect the president, that number exceeds 30,000. Yet when we elect our city councilors – the people who oversee public safety, our streets and parks, our drinking water, trash disposal, waste water, snow removal, and so many other things that touch each of us every day or our lives – the number who vote in Lowell plunges to 10,000.

That is strong evidence that many in Lowell feel unconnected from city government. Where are the 20,000 others who vote in Presidential elections? Why don’t they vote in city elections too? They are registered, they know how to vote, they do vote – but not in city elections.

I believe that our biggest challenge is to find ways to better connect more people with local government. Many things should be tried because there is no single solution to this problem. But I do believe that bringing our elected officials closer to the people they represent as would be the case with some type of district councilor system would help and is certainly worth trying.

My final comment is about the Voting Rights lawsuit now pending against the city. Litigation is by its very nature adversarial, but it also presents an opportunity for intense mediation and negotiated solutions that benefit everyone. That’s what happened back in 1988 when the city settled the desegregation lawsuit and it’s what should happen now. The Voting Rights lawsuit is not disconnected from the work of this subcommittee, so I urge you not to miss the opportunity to use that as a vehicle for positive change.