Dave Perry walked around his neighborhood a couple of nights ago and wrote this after he got back home. Our readers may know him as a music journalist and/or the guy who runs Vinyl Destination record shop in Mill No. 5 on Jackson Street in Lowell. He’s also a senior writer in the communications office at UMass Lowell. Dave has an essay about baseball, Willie McCovey, and growing up in the new collection of blog posts from RichardHowe.com: History As It Happens: Citizen Bloggers in Lowell, Mass., now available to order at loompress.com. The book will be launched this Saturday, Aug. 5, 11.30 am to 1.30 pm, at Lowell Telecommunications Corp., 246 Market St., Downtown Lowell. Everyone is invited.—PM 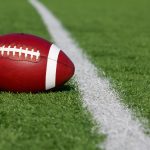 And so it begins. The first white SUV pulled up on the grass behind the backstop at the Parker Middle School field.

Football is here in Chelmsford.

It is a sunny 83 degrees at 6:35 p.m., and there are more than 100 kids on the field, which slopes lazily from home plate along Crooked Spring up to Graniteville Road, where other trucks and SUVs are pulled off the road and onto the grass. This is football, sport of flatbeds. No parking lot can contain them. If there are rules for others, fine.

Parents, mostly moms, are clustered aside the field in folding chairs, protected by visors. Daughters run in gaggles around the action, surveying it without noticing a bit.

The dads mostly stand in little circles, talking football. Hands on hips, legs open as if they will sprint at any moment. One of them is always twirling a whistle in a circle, like a cop on a beat once did.

Another one inevitably holds a clipboard.

Every one of them wears a cap.

The kids, in helmets, run. It is not clear if there is a specific pattern, just around, and they have already  devised coping mechanisms.

“Slow down, slow down,” says one, lagging in the sweating pack of what look to be middle-schoolers, far from their coach.

There are packs of them, presumably teams.

Another pack gathers in the corner nearest the beacon of butterfat, Sully’s, kneeling.

They approach—running now—a tall man with a kind face.

“How we doing boys?”

He is the head coach.

You always loved baseball. The subtleties. The leather, the wood, the way you could make a curveball break. You love the time it took, the thing everyone else hates. You did some of your best work on a baseball diamond, and some of your worst.

Football was something your dad leaned in and said, “Hey, just give it a try.”

Easy for him. Star quarterback. Went to UC Berkeley to play after a couple years at J.C. No one really knows or said much about it, but you have a photo somewhere of him, one of those official team pictures, of him in a “Cal” uniform, hair perfect.

And now your parents were sort of worried you didn’t have enough to do. Everyone your age played Red Raiders. You didn’t. You did Boy Scouts. And baseball. Man, you played baseball, relished it.

There were touch football games at a field near your house with Fitz and Krauss and Bert. But that was about it. You yearned for no more.

Finally, when freshman football rolled around, you figured, what the heck. You had grown a bit, though nothing near others. They all knew the game and you found a way to avoid being cut the first time by lurking in a pack. You didn’t play. You survived.

You could not learn the plays. You did not know why. But they didn’t make sense to you. It was a code and it was foreign and you didn’t much care.

We are learning some rough lessons from football now, catching up to injuries that revealed themselves in horrible ways. Brains concussed into mush.

And in 1970 or so, when you were sleazing through tryouts, the coaches had a way of seeing who you were. Boy versus boy.

You stood 10 yards apart, your teammates’ cheers revving you up like a supercharged bulldozer. When the coach blew the whistle, you ran straight at your opponent, head down.

You have no doubt seen the nature film of the rams butting heads.

And so the coach, wanting to eliminate me for good, knowing full well I was an impostor, set me up against a boy who was built like an anvil.

“Perry” screamed the coach. “Your turn!”

The sound of helmet on helmet, a rich CLACK.

There were stars and a rush of air.

And you were okay. The coach praised you for doing as well as you did, though he could not see the fireworks finale going off in your skull.

You wanted to be cut.

The next day you were.

Relief. You sucked at football. Your discussion with the sport never really got to the stage of where you might play. Your dad seemed fine with it.

Your little brother did not suck. He did amazing things as a lineman. You went to watch him whenever you could, scrambling over offensive linemen, stretched out like a spider to block a pass. But you could only stay so long. It was the clack of the helmets.

You never liked it. You still sit in rooms of men and pretend to like it. But they know. Just like the coach knew you were a fraud. They know. You are the vegetarian at their barbecue. They can sniff you out.

There is a kid like you in there somewhere tonight at the Parker School. In that pack, there is a kid hiding.

Kid, there is always baseball.