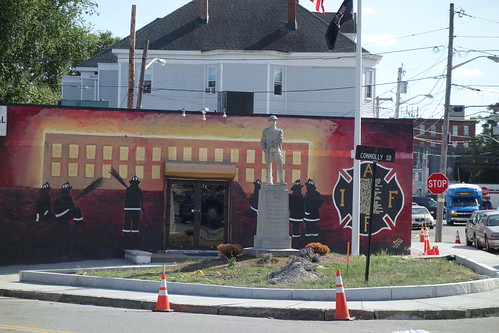 This is the eleventh weekly installment of my Lowell in World War One series which commemorates the centennial of the entry of the United States into World War One. Here are the headlines from one hundred years ago this week:

June 11, 1917 – Monday – Lowell Soldiers Home for Recruiting (22 members of the 6th regiment, led by Major Kittredge, have returned from their deployment to staff recruiting stations around the city). Another US Ship Sunk. Pershing officers now in Paris.

June 12, 1917 – Tuesday – Recruiting campaign nearing the close (Major Kittredge announced that companies C, G and K of the Sixth, and Company M of the Ninth, are near their 150 man strength and so the recruiting effort will end in a few days). Armed American steamer Petrolite with crew of 38 sunk by German submarine.

June 13, 1917 – Wednesday – Two big liners sunk by German submarines. Pershing, head of US forces, now in France. Rookies will leave here tomorrow (new recruits of Company K heading to camp in Framingham). Flag Day Exercises in Lowell Schools; Pupils Pledge Allegiance to the Flag (At the signal of the teacher, all students rise and every pupil gives the flag a military salute, saying “I pledge allegiance to my flag and to the republic for which it stands: One nation indivisible, with liberty and justice for all.”

June 14, 1917 – Thursday – Pres. Wilson declares anew aims and purposes of US in entering World War. Addressed great audience at Flag Day Celebration. U.S. entered conflict not only to keep world safe but also because of “extraordinary insults and aggressions of German government.” Lowell boys go to camp at So. Framingham. Flag Day Observance by Lowell Elks (the most extensive Flag Day celebration that Lowell has ever witnessed this afternoon. (a parade and “ritualistic and patriotic exercises at South Common).

June 15, 1917 – Friday – Liberty loan is over subscribed. Avalanche of subscriptions in final hours brings total to $3,000,000,000.  Everything ready for Battery B ball. (many at work to turn the matter-of-fact drill shed into a fitting setting for the much heralded farewell dance which Battery B is to hold there this evening. Lt Gov Coolidge, Congressman Rogers, Mayor O’Donnell all to attend.