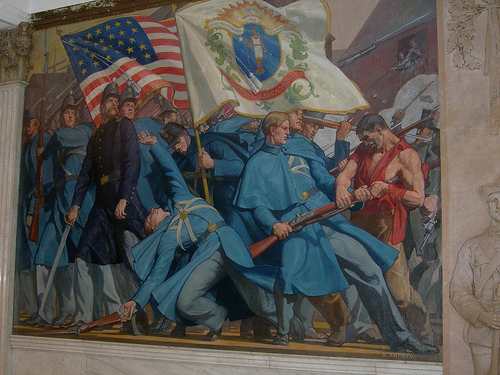 At the top of the stairs leading to the third floor rotunda of the Massachusetts State House in Boston is a colorful mural, ten feet high and fifteen feet wide, that depicts the soldiers of the Sixth Massachusetts Volunteer Infantry Regiment fighting a well-armed mob of angry civilians in Baltimore, Maryland, on April 19, 1861.  The regiment had left Lowell, Massachusetts, on April 17, just two days after the surrender of Fort Sumter, in response to President Lincoln’s call for 75,000 volunteer troops to put down the rebellion.  En route to Washington, DC, the troops were attacked by Southern sympathizers in Baltimore.  Four soldiers were killed, making them the first men to die in the Civil War.

Two of the dead, Luther Ladd and Addison Whitney, were young mill workers from the city of Lowell. Ladd and Whitney were later memorialized in Lowell with a monument that bears there name. The Sixth Regiment included 212 other soldiers from Lowell, a relatively new city in an area of old settlements.

By the beginning of the Civil War, Lowell’s 36,827 residents made the city the second largest in Massachusetts and the twenty-sixth largest in the United States.  Lowell became the leading textile manufacturing community in the country.  By 1860, the 12,000 looms in the city’s mills turned 690,000 pounds of cotton into 2,246,000 yards of cotton cloth each week, making it the largest producer of textiles in the entire country.

Lowell’s most famous workers were the Yankee farm girls who came to work in the mills when they first opened. The New England farm girls had not come to Lowell alone, however.  On the eve of the Civil War, Lowell had a large population of young men, New England natives primarily, who provided the skills necessary to build, operate and maintain the city’s textile mills.  These were the men who went off to war in 1861.

Pre-Civil War newspaper accounts of the Sixth Regiment’s activities disclose a variety of parades and parties but little indication of the unit’s readiness for war.  In January 1861, when the newly elected Governor of Massachusetts, John Andrew, issued General Order Number 4 which ordered all militia regiments purged of those who, because of poor health or family or business commitments, would be unable to depart for extended military service upon short notice, twenty-five percent of the men left the regiment. Those who remained received intensified training and new weapons, uniforms, and equipment.

The train carrying the regiment left Lowell on April 17, 1861, bound for Boston and points south. Because Washington, DC, was garrisoned by only six companies of regular troops and fifteen companies of local militia whose pro-Southern sentiments made them more of a threat than an asset, the Sixth Regiment was ordered to proceed to the capital as quickly as possible.

The quickest route to Washington led through New York, Philadelphia, and Baltimore, a city with extensive economic, social, and cultural ties to the south.  The configuration of the rail route through Baltimore heightened the risk of confrontation.  Trains coming from the north arrived at the President Street Station.  Individual cars were then decoupled and drawn by horse a mile through the city to Camden Station.  There, the cars would be reunited with a locomotive and continue the journey southward.

Upon his arrival in Philadelphia, Pennsylvania, at 5:00 P.M. on April 18, Colonel Edward F. Jones, the commander of the Sixth Regiment, learned of the likelihood of violence in Baltimore and formulated a plan designed to avoid confrontation.  Rather than remain the night in Philadelphia, the regiment would depart at 1:00 A.M., placing it in Baltimore at first light, when the troublemakers would still be asleep.  Once there, the entire unit would dismount from the train and quickly march through the city to Camden Station.  The logic of the plan was clear since an entire regiment would likely intimidate any mob that appeared. 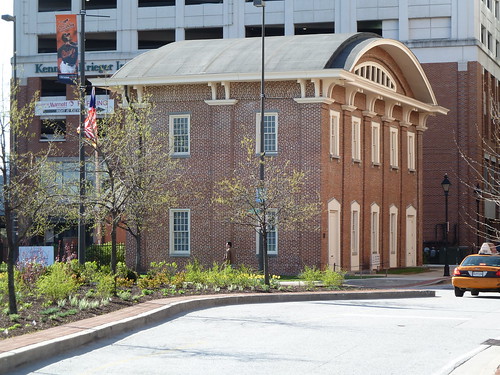 The plan went awry before the troops even reached Baltimore.  Crossing from Delaware into Maryland, the ten cars of the train were floated across the Susquehanna River by ferry.  Although Colonel Jones failed to realize it at the time, the cars were reattached to the locomotive in a different order, leaving Jones in the fourth car of the train, not the first.  When the train finally arrived in Baltimore, the railroad workers immediately began shuttling individual cars through the city. 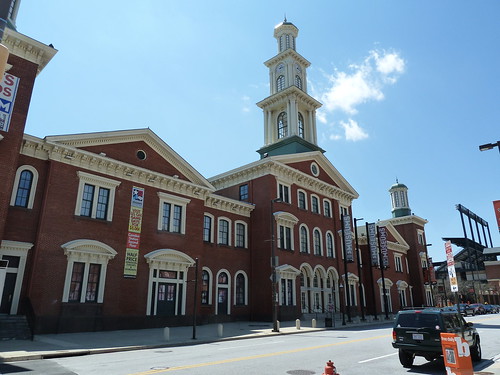 By the time Jones realized what was happening, his unit was scattered throughout Baltimore, and all he could do was wait and hope that the cars all reached Camden Station intact.  The first seven cars did just that, but their passage had alerted city residents who took to the street, blocking the way of the final three cars.  A captain took command of the troops in those cars, got them off the train and led them through the streets and the ever-growing crowd.  Bricks and then bullets soon followed the insults of the crowd.  Four soldiers were killed; thirty-one were wounded.  The men of the Sixth returned fire, killing twelve and wounding an untold number of civilians. After reaching the relative safety of Camden Station, the regiment reformed and continued on to Washington where its men were welcomed as heroes and housed in the Senate chamber.

The riot in Baltimore gave the Sixth Massachusetts an early prominence that was eclipsed by the enormous scope of the war and that regiment’s limited participation in it.  Continuing on to Washington, DC, in April 1861, the Sixth was added to the capital’s garrison.  On May 13, the regiment moved back to the vicinity of Baltimore to help take control of that city but by mid-July, the Sixth had returned to Washington, the ninety-day enlistments of its volunteers about to expire.  The Union defeat at the battle of Bull Run at Manassas, Virginia, and the resulting threat to Washington caused the Sixth Regiment’s enlistments to be extended for an additional week, but the regiment returned to Lowell shortly thereafter.

The Sixth Regiment was activated twice more during the war but only a small portion of the original volunteers who left Lowell in April 1861 remained with the unit during its subsequent service.  In 1862, the regiment spent nine months in Virginia as part of the Union effort in the Peninsula Campaign led by General George McClellan.  The regiment was activated again in 1864 for one hundred days and was assigned to garrison duty at Fort Delaware, a fortification on the Delaware River forty miles south of Philadelphia.  Many of the soldiers’ families came along for what amounted to an extended summer vacation.

The military service of most of the soldiers who left Lowell in April 1861 did not end with the return of the regiment to the city.  Of the original volunteers, 54% (115 men) joined other units during the war.  A future post will discuss their experiences during the Civil War.