This is the third installment of my Lowell in World War One series which commemorates the centennial of the entry of the United States into World War One. To help commemorate this anniversary in Lowell, each week during 2017 and 2018, I hope to post the daily headlines that appeared in Lowell newspapers at that time. Here are the headlines from this coming week from one hundred years ago: 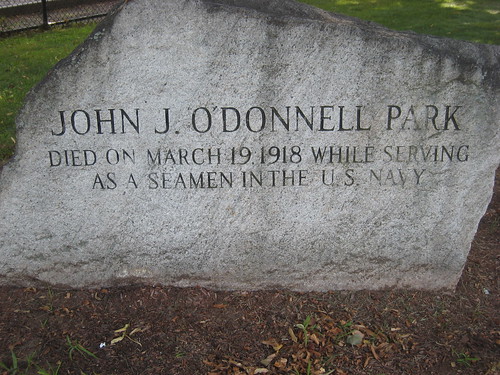 April 16, 1917 – Monday – General battle from North Sea to the Swiss border. Wilson appeals to nation to work together for victory. Says “the Supreme Test of the nation has come and we must speak, act, and serve together.” Appeals to farmers to raise greatest crops. Great “international army of service” to include every man, woman and child in the land. Only corporal’s guard left at armory on Westford street. First appeal for aid by safety committee. Money needed for relief of soldiers’ dependents. Conference held yesterday at City Hall. Increase in farm products and home garden proposition discussed.

April 17, 1917 – Tuesday – German submarine fired torpedo at US warship off New York. Torpedo missed destroyer by 30 yards. Great French victory in drive; German losses 100,000. Opening of cadets armory tonight: The formal opening of the new armory of the OMI Cadets will take place this evening and an elaborate program has been arranged for the entertainment of all who attend.

April 20, 1917 – Friday – Celebrate US entry into the war by religious service in London. Stars and stripes flew from highest tower of Parliament buildings at Westminster. French still gaining in spite of heavy counter attacks. Secretary Houston today recommended that the council on national defense be empowered to fix minimum and maximum food prices. Congressman Rogers has re-introduced the bill for the Lowell post office, calling for an appropriation of $600,000 for site acquisition and building construction.