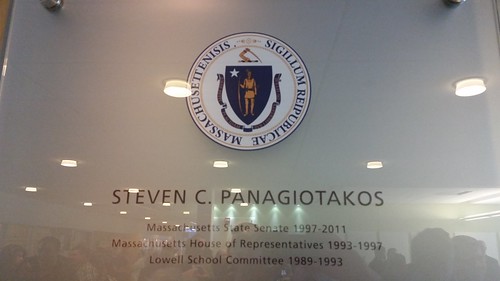 More than 250 people gathered in the lobby of the Mark and Elisia Saab Emerging Technologies and Innovation Center at UMass Lowell today to help the university honor former Steve Panagiotakos for his efforts on behalf of the university while serving in the Massachusetts State Senate.

Steve then came to the podium and delivered thoughtful, heartfelt remarks that he kindly shared for publication here:

Remarks of Steven C. Panagiotakos
former Massachusetts State Senator
at plaque recognition from
University of Massachusetts Lowell
for his contributions to the university
April 10, 2017

As much, as I am humbled and thankful for the recognition from this wonderful and highly ranked institution of higher learning, I am even more humbled because it’s my hometown university, and even more thankful because you, my family, friends and colleagues have taken the time to share this very special moment with me.

You know, in all the ages of humankind and in all the places on this great, big planet earth, we, all of us, have been brought together in this time and in this place. Every day that goes by, I am thankful for that blessing of God’s. But with it, comes a responsibility to make this time and this place the best that we can for each other.

I grew up on Gibson Street in the Highlands. Have lived two streets down on Sanders Ave for the past 25 years. And my law office is just a few streets up from there on Parker Street. Most of my world, my life, has existed in those few city blocks. But you know, I wouldn’t have it any other way. When I hear from or about a friend who has moved and lives in some famous city or scenic town or exotic warm weather location, I honestly don’t get one inkling of regret because I truly feel blessed to live in this time and in this place because of all of you and the many who are not here who make this city a true community.

And what really amazes me is that so many who no longer live in Lowell still remain a part of it. For those of us who grew up here, this mill town will always be our hometown. I think that there is something in the water in that Merrimack that is flowing right in front of this building.

Sometimes as human beings, we don’t appreciate what is always there for us, right in front of us like this river. We drink from it. We clean with it. We nurture our gardens with it. Every day of our lives here, we are benefiting from it. But we can drive over its bridges thousands of times in our life with very little a thought about the river below or its history.

But to truly appreciate where you are or where you’re going, you have to know from whence you came, from where you’ve been, from what came before you. So let me take you on a very quick 3 minute journey of hundreds of years from the reviewing stand of these river banks here at Pawtucket Falls.

These falls are a 32-foot drop beginning over by the O’Donnell Bridge, flowing down the rapids in front of us under the Howe Bridge named after one of Lowell’s great fathers, Dick Howe, then down to right before the entrance of Beaver Brook.

One of the greatest fishing areas in all of the Northeast was right here. It “ran silver,” they say with salmon, shad and trout. In fact, the Native American tribes of the entire Pennacook nation would gather right here for many weeks of fishing every Spring, for their festivals and for council meetings. To them, this was highly sacred ground.

A little over 350 years ago, right down the bank here by the O’Donnell Bridge, the famous apostle to the Indians, John Eliot, came to the wigwam of the Great Pennacook Chief Passaconaway to share the gospel, which would bear the fruit of the fifth of fourteen “Praying Indian” villages in Massachusetts, just across the river from us.

In 1740, it was this same Pawtucket Falls that served as the natural boundary to settle the dispute between New Hampshire and Massachusetts, when King George from his throne in England ruled beginning at a point three miles north of the Merrimack River from the Atlantic Ocean to these Pawtucket Falls then a straight line directly west until it meets “His Majesty’s other governments.”

In 1819, a group of Boston investors and entrepreneurs walked these river banks right out in front of us and saw the great natural force that if harnessed could power a new revolution, a revolution of the machine. Thousands upon thousands would come here to work in the mills and build the canals. From the farms of New England came the mill girls, the first critical mass of female workers in America to seek some degree of economic independence. Then from around the world, they came for their piece of the American Dream beginning with the Irish, then French Canadians, then Greeks and Syrians, Poles and Lithuanians, Armenians and Italians, and many others.

Just over a hundred years ago, these river banks would become the home of two schools of higher learning, one to prepare teachers for educating the minds of future generations, known as the Lowell Normal School, which would become Lowell State College, and then Lowell Textile Institute, which would evolve into Lowell Technological Institute, whose engineers were held in the same esteem as graduates from great universities, like MIT, RPI and WPI.

They would merge into University of Lowell in 1975 and then UMASS Lowell in 1991, adding to the contributions of these river banks at the Pawtucket Falls. Senator Paul Sheehy has to be remembered for his great leadership in this effort.

And now, this important building is making its contributions by providing the equipment, environment and intelligence necessary for the research to bring about advancements in the emerging new technologies of the twenty-first century.

From the great fishing land of the Pennacook Indians, now… in this  time… and in this place…to the home of  ground breaking research in nanomanufacturing, nanomedicine, biomaterials, elastomers and much more, to protect us, to heal us and to enhance our everyday quality of life.

I am very thankful to have had a part with so many others in adding a new chapter to the Pawtucket Falls and building upon the great foundations that came before us. 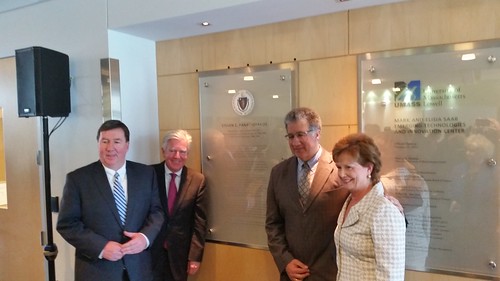 With that, Chancellor Moloney, President Meehan and Representative Nangle joined Steve in pulling the royal blue cloth from the wall plaque which states:

An ardent supporter of the University of Massachusetts Lowell, State Senator Steven C. Panagiotakos played a pivotal role in helping the university strategically position itself to capitalize on the cutting edge technology necessary for the success of the advanced manufacturing sector of the region.

Through his efforts, in 2003 the Massachusetts Legislature created the John Adams Innovation Institute administered by the Massachusetts Technology Collaborative to support the state’s knowledge-based economy through strategic investment.

The Commonwealth designated UMass Lowell a Nanomanufacturing Center of Excellence and provided $5 million in grant funding through the Innovation Institute. Working with his colleagues in the House of Representatives – Thomas Golden, Kevin Murphy and David Nangle – Senator Panagiotakos secured $35 million through the economic development bill of 2006 for the construction of the state-of-the-art Mark and Elisia Saab Emerging Technologies and Innovation Center.

This funding provided UMass Lowell with the resources to construct its first new academic building in more than three decades, beginning the physical transformation of the campus to a worldclass institution. The research, technological breakthroughs and industry partnerships that have been forged in this building would not have been possible without the advocacy and leadership of Senator Panagiotakos.

UMass Lowell will always be profoundly grateful for the significant contributions of Senator Panagiotakos.