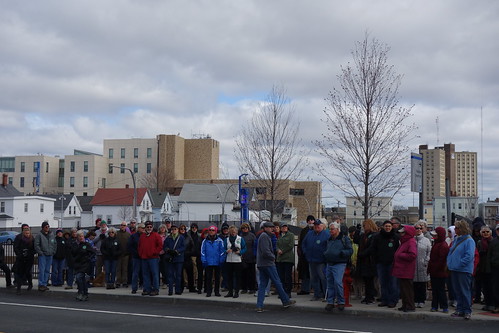 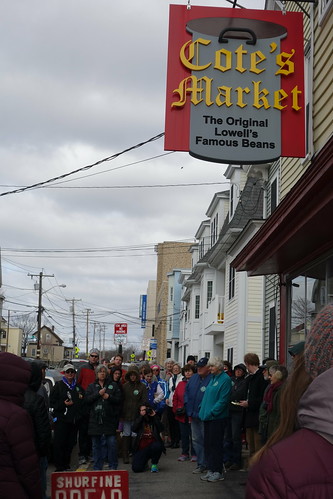 The next Lowell Walk is Saturday, May 6, 2017 at 10 am. The topic will be the Labor Movement in Lowell and it will be led by Bob Forrant.

Then on Friday, May 12 at 1 pm, and on Saturday, May 13 at 10 am, I will lead walks of Lowell Cemetery. Both of these walks will begin at the Lawrence Street Gate. Parking is available inside the cemetery.

A full schedule of Lowell Walks is available on this site’s calendar.

The Massachusetts Supreme Judicial Court heard oral arguments this week in the case of Smith v. City of Westfield, which might not have nationwide import, but does have unique interest in Lowell because it involves Article 97 and its protection of recreational space – the same issue raised by the proposed use of the Cawley Stadium site as a new Lowell High School.

In the Smith case, the city of Westfield sought to build a school on city-owned land that had been used as a playground since 1939 and for which the city had accepted Federal conservation funds in 1979 to upgrade the playground. A group of neighbors, including Ms. Smith, challenged the city’s decision. A Superior Court judge issued an injunction against the change of use, but then the Massachusetts Appeals Court found in favor of the city. Smith appealed that decision and the SJC agreed to hear the case.

This case turns on whether the land in question had been “dedicated” to the uses listed in Article 97 of the Massachusetts Constitution which states:

“The people shall have the right to clean air and water, freedom from excessive and unnecessary noise, and the national, scenic, historic, and esthetic qualities of their environment; and the protection of the people in their right to the conservation, development and utilization of the agricultural, mineral, forest, water, air and other national resources is hereby declared to be a public purpose.”

One thing made very clear from the oral agruments, which are also available as streaming video online, is that the test for whether land has been dedicated to Article 97 use is extremely ambiguous. Some cases are clear, as when the deed conveying title to the town explicitly says the land shall be used for one of the purposes stated in Article 97, or when some other document explicitly dedicating the land to Article 97 purposes, is recorded at the registry of deeds.

In Lowell’s case, three such documents were recorded: one for the Cawley soccer field; one for the Cawley track & visitor stands; and one for the South Common. Recording these documents that expressly dedicated the land to Article 97 purposes was a requirement the Commonwealth imposed on financial grants it made to the city for improvement of those green spaces.

But what happens when there is no document that expressly states that the land has been dedicated to Article 97 purposes? That is the issue in the Smith v. Westfield case (and is also the issue in the Cawley-for-Lowell High proposal).

The attorneys for Smith argued that Article 97 status should be determined based on the use of the property; the attorney for the city argued that it should require a document on record at the registry of deeds. From their questions, the justices seemed perplexed, not wanting a strict “must be recorded” standard, but also recognizing the need for a clear and predictable test for determining whether land falls within Article 97.

Watching this oral argument helped put our great Cawley debate into some context. Namely, that the state lacks a clear standard of what constitutes Article 97 land and that much confusion surrounds the issue, not just here in Lowell, but across the state.

Presumably the SJC decision in this case will help establish that clear and predictable standard. But given Lowell’s timeline, it is unlikely that the SJC will announce its decision in time to affect what’s happening here in Lowell.

Sticking with the SJC, this past Tuesday the court heard oral arguments in a case of nationwide import, Commonwealth v Sreynuon Lunn (SJC-12276). Here’s a summary of the facts: On October 24, 2016, Lunn was arraigned on a charge of unarmed robbery and was held on bail. At the same time, the trial court noted that Department of Homeland Security had filed an “Immigration Detainer – Request for Voluntary Action” for Mr. Lunn.

After many continuances during which the defendant was still held on bail, the Commonwealth on February 6, 2017, reported that it was not ready for trial and the court dismissed the case for lack of prosecution. Mr. Lunn’s lawyer moved that his client be released from custody notwithstanding the DHS waiver. The trial court declined to do that and Lunn appealed to a single justice of the SJC. The SJC accepted the case but before there could be a hearing, DHS took custody of Mr. Lunn. The SJC held that even though the case was moot as to Mr. Lunn, the court would still hear the matter since it raised “important, recurring, time-sensitive issues that will likely evade the full court’s review in future cases.”

On February 8, 2017, the SJC invited interested parties and organizations to submit “Friend of the Court” briefs on the following issues:

In essence, the defendant’s argument is that once any state charges are dismissed, or he is released on bail, any further detention by local police or state courts would constitute a new “arrest” and would have to be based on probable cause or, in the case of a warrant, be reviewed by an impartial magistrate. Because in Immigration Detainer is only signed by an Immigration Officer and is not reviewed in any way, holding someone pursuant to it would constitute an illegal arrest under Massachusetts law. That’s the argument, at least.

Should the SJC agree with the defendant’s argument and rule that neither local police nor state courts can legally hold someone in custody pursuant to an ICE detainer, it would set up a Constitutional confrontation between the Trump Administration and the Commonwealth of Massachusetts.

SJC decisions sometimes are not issued for several months after oral arguments, so it might take some time before we know the outcome of this case. Still, because of the ongoing nature of this issue, the decision might come faster in this case. If you’d like to see the oral arguments from last week, they are available online via streaming video from Suffolk University Law School. 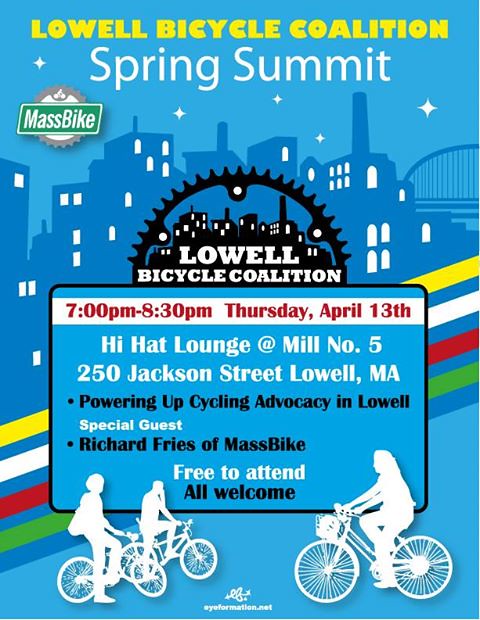 The Lowell Bicycle Coalition will hold its Spring Summit meeting on Thursday, April 13, 2017 at 7pm at Mill No. 5, 250 Jackson St, Lowell. The guest speaker will be Richard Fries of MassBike, the Massachusetts Bicycle Coalition. The subject of the meeting is “Powering up Cycling Advocacy in Lowell,” translating advocacy into action for improving bicycling access in Lowell.” The meeting is open to the public and everyone is invited to attend.

The council meeting this past Tuesday night was relatively subdued. I watched the meeting and posted a report afterwards in case you missed it.

This coming Tuesday night, the agenda has eleven motions by councilors. Here they are:

Councilor Elliott – Request City Council vote to recognize veterans of the month, from the Lowell Veterans’ Commission, on a quarterly basis at City Council meetings as well as welcome back veteran service members from overseas.

Councilor Elliott – Request City Council discuss dedication of a park bench in memory of Cole Kinney per request of the family.

Councilor Leahy – Request City Council vote to name open space at 150 Douglas Road, previously gifted to the City by the Knott family; as “Lowell Veterans’ Park”, and dedicate its use in honor of Lowell veterans.

Councilor Leary – Request City Manager review the feasibility of combining Public Works and Lowell Public Schools Custodians departments into a Maintenance Department, the report to include both positive and negative issues that such a merger would incur, any potential efficiency improvements and costs savings achieved.

Mayor Kennedy – Request City Manager consider extending the Clay Brook culvert to beyond the dam area and make it part of the Capital Plan.

Mayor Kennedy – Request City Manager consider the construction of a dike on the west bank of Beaver Brook and make it part of the Capital Plan.

Mayor. Kennedy – Request City Manager provide City Council and the LHS Building Committee with clarification regarding the apparent conflict between 963 CMR 2.21 and the recent Skanska response to the inquiry regarding Section 3.1.8 (Regarding Past Projects) of the MSBA Preliminary Design Program Review, report to include an estimate of the financial impact of this provision should the high school leave the downtown area.