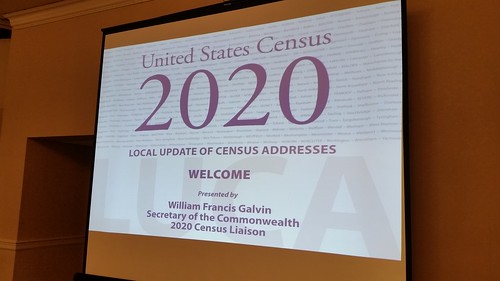 Most people know that the U.S. Census is conducted every ten years with the next one to be conducted in 2020. The census is a moment-in-time snapshot of the United States, but it doesn’t just happen. As soon as one census is completed, preparation for the next census begins.

The Local Update of Census Address Program (LUCA) is a partnership program established by Congress that enlists local government to assist in identifying all residential addresses. If you don’t know where people live, you’re not likely to count them in the census.

Secretary of the Commonwealth William Galvin is the 2020 Census Liaison for Massachusetts. Last week, Secretary Galvin convened a kick-off conference at the Sturbridge Host Hotel and Conference Center in Sturbridge that was attended by 350 local officials who are the Census liaisons in their respective communities. For example, Eda Matchak, director of the city of Lowell’s Election and Census Office was there as were officials from Chelmsford, Tewksbury and other Greater Lowell Communities. I attended because the first place that new building lots and condominium units show up is at the registry of deeds.

Here are some of the highlights from the conference: 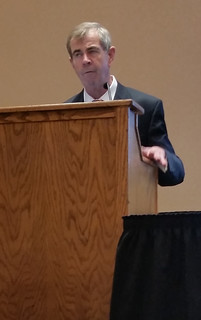 Secretary of the Commonwealth William Galvin

Secretary William Galvin was the first speaker. After welcoming everyone to the conference, he explained that the Commonwealth’s population is approaching 7 million. This census effort at the state and local level is about political power. It will determine whether we keep our existing congressional districts, lose one, or perhaps even gain one. It also affects redistricting for state senators and representatives. This effort is also about funding. Every program of consequence requires Federal assistance which is typically based on population. So in that way, the census helps advance the goals of individual communities.

Why start so soon? Since the last census, much new housing has been created. There are new cul-de-sacs, new dormitories, new conversions of factories to housing. The census is a snapshot of the community at one point in time, but you have to work hard to be ready for that moment.

LUCA (Local Update of Census Address) is the single opportunity to correct addresses. One lesson we have learned is that you never find what you expect. Every community has changed. A critical part of our population is higher education. We bring students from around the world to our state. They should properly be counted here.

Secretary Galvin is very worried about the immigrant population. Massachusetts is eighth in the nation in percentage of foreign-born population, but it is not a single group. Massachusetts is remarkable in the diversity of the origins of its people. Most states with a high percentage of foreign born residents have them coming from a single country. In Massachusetts, they come from everywhere. They come for higher education and for health care, then many of them stay. We discover them every ten years.

Whether our foreign-born residents are documented or not, we still have to count them. These people are here. They ride our public transit system, they receive health care, they go to school. We should get our fair share of the money available to us because of their presence. But the climate regarding immigrants has changed dramatically which will cause immigrants to avoid participation in the census. That’s why it’s more important than ever for us to work with cultural organizations, religious groups, and higher education to identify and count everyone. (Secretary Galvin cited Lowell as an example of how public schools can be a good source of the latest information on which countries people are coming from. Everyone sends their kids to school, so the schools often have the earliest indicators of new populations in the community).

Secretary Galvin closed by saying the local officials present at this session “are the eyes and ears in the community.” Beacon Hill can speculate, the census department can run statistics, but you know your communities and your residents and are in the best position to provide accurate information about residences.” 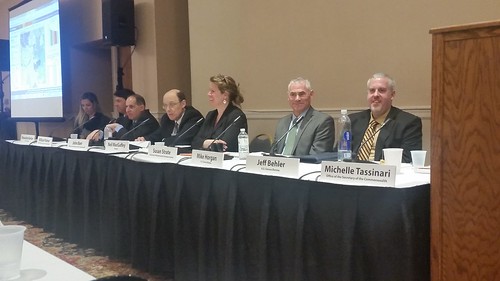 The next speaker was Jeff Behlen, the Director of the New York Regional office of US Census Bureau. It’s one of six national census offices. This is his third census but first in Massachusetts (which is in the New York region). He’s never seen this level of preparation this early and finds it very impressive. More than $400 billion in Federal funds are distributed in accordance with the census, so there is a lot of financial support at stake.

In 2001, the “long form” sampled ever sixth person and yielded a “characteristics of the nation” report. Now, we have the American Community Survey which is done continuously on a monthly basis. The “short form” used by the census is just the count of people.

The actual taking of the census has to happen very quickly since there is no delaying the results. The first step is to determine where to count (addresses). Second is to motivate people to respond. Third is to do the count (they use 500,000 temporary employees and, new for 2020, respondents will be the able to answer the census by telephone or online). The fourth and final step is to release the results.

The next speaker was Mike Horgan, also of the US Census. He talked about “address maintenance, 2010 to 2020.” If you don’t know that an address exists, it’s unlikely you will count the people living there. One of the biggest challenges comes from multi-unit structures like apartment buildings and condominiums. Local communities can be most helpful with new construction and with identifying the addresses of units within multiunit structures (i.e., Unit 1, Apartment 1).

Neil MacGaffey, Director of Mass GIS, spoke about his office’s efforts to create a Master Address Database (MAD) for the state. This will be helpful for the census, but much of the work on standardizing address is being driven by “Next Gen 9-1-1” which is the replacement for E-9-1-1 which was based on hard-wired telephones. Now, many people just use cell phones. Next Gen 9-1-1 will have a better ability to locate people using cell phones.

The goal for Mass GIS is to have a comprehensive address list for the Commonwealth. They are trying to standardize multiple sources such as local assessors, the post office, and E-9-1-1. Besides the street address, Next Gen 9-1-1 will include a “name” field which you could use for “City Hall” or “Rogers School” which is how people tend to identify those places rather than their street address.

The next speaker was Susan Strate of the UMass Donahue Institute, which provides data analysis support to the Secretary of the Commonwealth’s office for the census. A big challenge for this office is how to identify “group quarters” such as nursing homes, shelters, dormitories, and jails. Thus far they have identified 1500 dormitories, 412 nursing homes, and 7 “privately owned student housing” (POSH) complexes. Another big challenge is the conversion of mill buildings to residential units. She said it is important for towns to participate for a couple of reasons: there is “data lag” between when something happens and when it shows up in statewide data sets; and local knowledge which is particularly helpful in identifying new units, unit numbering systems, and “under the roof” conversions that create new units but would not be evident on overhead photos.

This was an excellent, informative seminar about important work at the local level that doesn’t get much attention, but which is critically important to conducting an accurate census of our communities and our state.