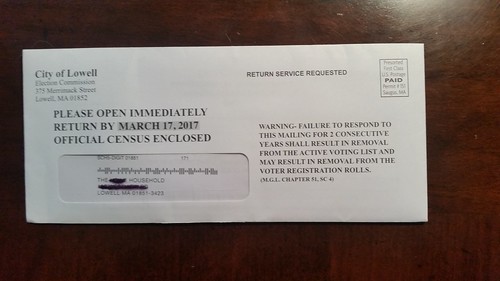 The City Census arrived in the mail on Friday. Be sure to answer it promptly. Not doings so will result in you being marked “inactive” on the voting list. This annual requirement comes from Massachusetts General Laws chapter 51, section 4 which mandates “an annual street listing of residents as of January 1 of each year.”

The form itself is pretty simple. Listed on it are your address and the name, gender, date of birth, occupation, voter status, and veteran status of everyone resident in the household on the last city census. This information is printed on the form. You just make any changes, additions, or deletions, sign and date the form, and mail it back.

I put this at the top of today’s Review because despite arriving in an envelope with warnings printed all over it – “Please Open Immediately” – “Return by March 17, 2017” – “Warning: Failure to respond . . . shall result in removal from active voting list . . .” – the envelope in many ways resembles the typical solicitations and advertisements (i.e., “junk mail”) that many of us receive and toss in the trash each day. Yet failure to sign and return the form promptly can cause inconvenience for you when you show up to vote on election day.

As I scrutinized the census form, I noted another column in the “name” section that takes on a whole new significance in 2017 America – “Nationality (If not U.S. citizen)” it asks. I wonder how many forms will be withheld, or sent back with that space intentionally left blank, by anyone who is not a U.S. citizen, documented or otherwise?

“Immigration, Refugees, and Our Community”

Wednesday night I attended an excellent program at UMass Lowell called “What is Sanctuary? Immigration, Refugees, and Our Community.” A number of speakers addressed different topics. One helped define terms such as sanctuary city, sanctuary campus, and trust ordinances. Central to all of those concepts is the unwillingness of local officials – police officers, school department personnel, college administrators – to become voluntary deputies to federal immigration enforcement officials.

For example, if a university registrar were to receive a letter from U.S. Immigration and Customs Enforcement requesting the names and addresses of all enrolled students who were not U.S. citizens, school officials of a formal (or even informal) “sanctuary” campus would not respond. It is important to distinguish between this type of voluntary request and a court order or subpoena which would get a response from the school.

Similarly, a police department in a sanctuary city (or in one like Lowell, which has an equivalent official police policy) would not inquire into the immigration status of anyone arrested. Furthermore, if ICE were to request that the police hold someone who would otherwise be released, the local police would not comply with that request and would release the individual. Contrast that with a case where ICE communicated to the local police that it had an arrest warrant for an individual in police custody. In that case, the police would hold the individual.

In both of these scenarios, the local officials would comply with any lawful order from a federal agency, but would not fulfill any voluntary requests.

Another speaker distinguished refugees from immigrants. Refugees are individuals at great risk of death or serious bodily harm in their own country either from discrimination, government action, or a number of other scenarios. Refugees are admitted into the U.S. apart from the regular immigration system. Refugees are also subject to extensive “vetting” or background investigations before being admitted. The speaker finished with a chart that showed the US at the bottom of the list of developed countries that take in refugees.

The speaker whose comments had the most profound impact on me came from the school’s office of Multicultural Affairs. She explained how this step-up in immigration enforcement has had a chilling effect on the willingness of foreign students to come forward and report instances of harassment and bias that they have encountered because of their race, national origin, religion, or other status. They avoid reporting such incidents because they fear that reporting their own victimization will make them a target of immigration officials. (Situations like this are the reason why so many in local law enforcement support policies of non-cooperation with ICE).

This fearfulness affects not just undocumented students (who tend to keep that status to themselves anyway) but to those who are here legally. For example, there are more than 100 UMass Lowell students from the seven countries covered by the temporarily on hold US government travel ban. When this semester ends, those students will not head home for the summer, because it is unlikely that they would be admitted back into the United States for their fall semester. The school is now seeking host families with whom these students can stay over the summer. 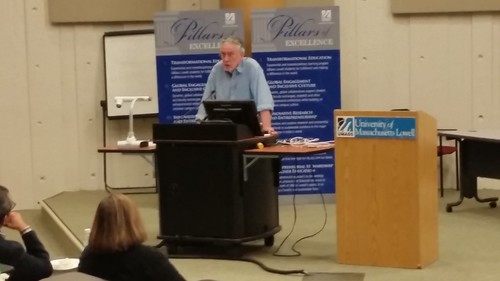 The speaker with the strongest message of the evening was historian Bob Forrant who put our current situation in the uncomfortable but I think utterly appropriate context of the 1850 Fugitive Slave Act. America’s first Fugitive Slave law was enacted in 1793 but over time, some northern states not only ignored it, they passed local laws that frustrated its purpose which was to return those who had escaped from slavery to those who enslaved them.

The newer act was part of the Compromise of 1850  which was a package of five separate bills intended to calm the growing national rift over slavery. The Fugitive Slave Act invalidated many state and local “liberty laws” and imposed onerous fines and jail terms on anyone who assisted an escaped slave or who failed to help capture escaped slaves. The enactment of this law provoked outrage across the northern states, especially in Lowell.

Resistance to the Fugitive Slave law was active and vocal in Lowell which was especially significant because the city’s economy was almost wholly dependent on the flow of cotton that was picked by slaves and so many city leaders had previously been hesitant to take a stand on the issue of slavery lest they upset their southern business partners. But the Fugitive Slave Act just went too far, even for many of the mill managers and owners, and people in the city actively resisted it.

Professor Forrant’s point is that we are likely headed for a situation reminiscent of the Fugitive Slave Act, just that today’s confrontation will be over the status of immigrants in our community, not former slaves. While it sounds a bit dramatic, I think Bob’s analogy is scarily appropriate given recent developments.

If you’re interested in learning more about the Abolitionist Movement in Lowell and the city’s response to the Fugitive Slave Act of 1850, mark Saturday, June 17, 2017 on your calendar. On that day’s Lowell Walk, Bob and one of his UMass Lowell graduate students will lead a walk on The Underground Railroad and Abolitionism in Lowell. 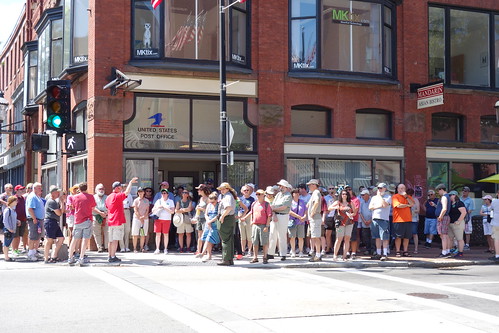 Lowell Walks is back for its third year. Here’s the schedule for 2017:

May 6, 2017 – Labor Movement in Lowell led by Bob Forrant and Rachel Arnason

All of the above tours begin at 10 a.m. at Lowell National Historical Park Visitor Center, 246 Market Street. All are free, require no advance registration, and take place on Saturday mornings. 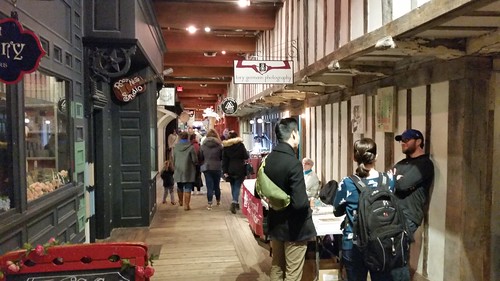 Lowell has a great history of writers and publishers which was very much in evident at yesterday’s Pulp & Press event at Mill No. 5. Local authors sold their books from tables in the hallway and took turns doing readings from the stage. Thanks also to Sean Thibodeau (photo below) of Pollard Memorial Library who organized the writers and their speaking program. 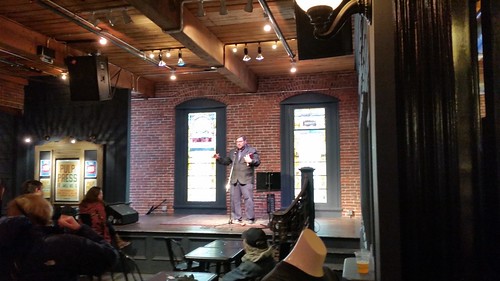 Sean Thibodeau at Mill No. 5

Mark your calendar. The first annual Lowell Book Festival will take place on Saturday, November 4, 2017 at Lowell High School. This event will celebrate books about Lowell or by people from Lowell, with an emphasis on the literary efforts of current and former high school students. Watch for more details in the coming weeks.