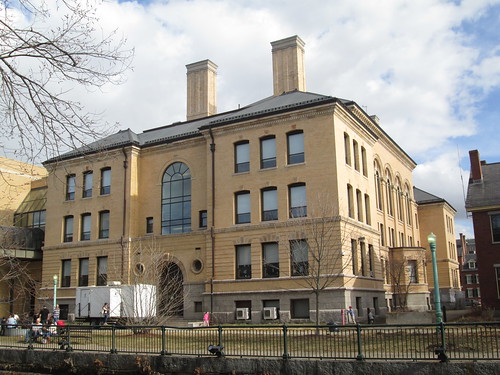 Just a couple of procedural notes on the Lowell High project:

This coming Monday, February 27, 2017 at 6:30 pm there will be a special meeting of the Lowell City Council in the Mayor’s Reception Room at City Hall. According to the meeting notice, the purpose of the meeting is to “begin Article 97 proceedings by meeting with State Delegation to review the process.” The meeting is open to the public.  Although it does not say so expressly, the meeting notice implies that some combination of State Senator Eileen Donoghue and State Representatives Tom Golden, Dave Nangle and Rady Mom might be at this meeting to discuss with the council how to go about obtaining a waiver of the Article 97 use restrictions that apparently encumber the proposed Cawley site for the new Lowell High School. Obtaining a waiver of those restrictions requires action by the state legislature; hence the meeting with our state legislators.

At Tuesday night’s council meeting, councilors will be asked to formally vote to submit the four options for the new Lowell High (full renovation; add/renovation option 2; add/renovation option 3; and new school Cawley site) to the Massachusetts School Building Authority. At the “committee of the whole” subcommittee meeting on the new high school ten days ago, the eight councilors present voted unanimously to recommend that the full council vote for these four sites, so unless any councilors have changed their minds since February 16, this vote should be just a formality.

Attached to the vote in the city council packet is a letter from Manager Murphy that explains the timeline going forward. The council vote, assuming it passes, will authorize Skanska to submit the “Preliminary Design Program” (PDP) packet for these four sites to the Massachusetts School Building Authority (MSBA).

The MSBA will take up to 30 days to review these proposals. Once MSBA approves these four options, Skanska and Perkins Eastman (the city’s consultant and architect) will conducted a more detailed study of each of the sites. This is called the Preferred Schematic Report phase.

Aided by the information gathered during the Preferred Schematic Report phase, the city council, in late April, will vote for one preferred site. That site decision will then be forwarded by Skanska to MSBA in mid-May. The city will then appear at the June 28, 2017 MSBA board of directors meeting for the formal approval of the site and the authorization to proceed to the Schematic Design phase.

Sometime between then and now, the council will have to take a vote that expresses its “fiscal willingness” to commit up to $344mil for the project, although the manager emphasizes in his letter to councilors that this is neither a loan order nor an irrevocable fiscal commitment by the city.

When the Commonwealth of Massachusetts enacted Education Reform in 1993, a large amount of state funds began flowing into the Lowell public schools. That same law, however, required the city to make a specific contribution, both in cash and with in-kind services, to the schools. For many years, Lowell always lagged behind in meeting its Net School Spending contributions.

When City Manager Murphy took office, he identified education as one of the three interconnected pillars of a successful city (the other two being public safety and economic development). Since then, the city has not only met its Net School Spending requirements, it has exceeded them.

At this week’s council meeting, Manager Murphy will present a report to councilors that shows that recently certified numbers for Fiscal Year 2016 show that the city exceeded its Net School Spending requirement by $9mil, and that the contribution in FY17 will exceed the requirement by $9.5mil.

The darkest places in hell are reserved for those who maintain their neutrality in times of moral crisis.
–Dante Alighieri

Back on February 7, 2017, a group of Lowell residents petitioned the city council to consider adopting a “Trust Ordinance” that would make it the official policy of the city to not inquire into the immigration status of anyone dealing with the Lowell police. The petition was met with a chilly reception from councilors who nevertheless referred it to the city manager for a recommendation.

At the next council meeting (February 14, 2017), the manager reported back to the council that an existing General Order of the Lowell Police Department already addressed the concerns raised by the petitioners-that the Lowell police do not inquire into the immigration status of individuals who they encounter unless it’s directly connected to the crime being investigated. The city manager and councilors felt this was sufficient and took no further action on the trust ordinance. At the time, I concurred with this outcome.

However, subsequent events nationally have made it clear that the Lowell petitioners were wise to be concerned about this issue. For example, a February 18, 2017 story in the Washington Post (“Memos Signed by DHS Secretary Describe Sweeping New Guidelines for Deporting Illegal Immigrants”) reported that:

Homeland Security Secretary John F. Kelly has signed sweeping new guidelines that empower federal authorities to more aggressively detain and deport illegal immigrants inside the United States and at the border. In a pair of memos, Kelly offered more detail on plans for the agency to hire thousands of additional enforcement agents, expand the pool of immigrants who are prioritized for removal, speed up deportation hearings and enlist local law enforcement to help make arrests. (Emphasis supplied).

Several city councilors have expressed concern that if the city were to take an aggressively pro-immigrant position, it might jeopardize funds received from the federal government by local law enforcement. Given the tenor of Secretary Kelly’s memo, especially the part about enlisting local law enforcement to round up illegal immigrants – Kelly called it “a force multiplier” for federal immigration officials – it’s only a matter of time before the feds affirmatively link such immigration enforcement assistance to the continued receipt of federal funds.

Given that the city council just addressed this issue, it’s probably too soon for them to formally revisit it. Still, we should continue discussing this issue and closely monitor the actions of the federal government. At some point, doing nothing might no longer be an option. Councilors (and all the rest of us) will have to decide whether to keep the current police pro-immigrant policy and forego some federal funding, or to take the money and start actively rounding up residents for deportation.

Boston Mayor Marty Walsh is not waiting. He has become an outspoken leader of those who support immigrants. Here’s an excerpt from a story in yesterday’s Globe about Walsh’s stance on this issue:

Boston Mayor Martin J. Walsh offered a passionate defense of immigration and religious diversity at the city’s largest mosque Friday night during a forum to hear the fears and concerns raised by the Trump administration’s executive orders regarding immigration and refugees.

The mayor struck a defiant stance in discussing Boston’s status as a sanctuary city, even though the Trump administration has warned that communities that offer sanctuary protections for undocumented immigrants could endanger their federal funding.

“I’m not afraid of losing money, first of all because we have the Constitution on our side, and secondly, we’re doing the right thing here in the city of Boston,” he said at the Islamic Society of Boston Cultural Center.

He added later: “If people want to criticize me for this . . . there’s an election in November.”

While it might be premature for the Lowell city council to revisit this issue, the community is mobilizing in support of immigrants. 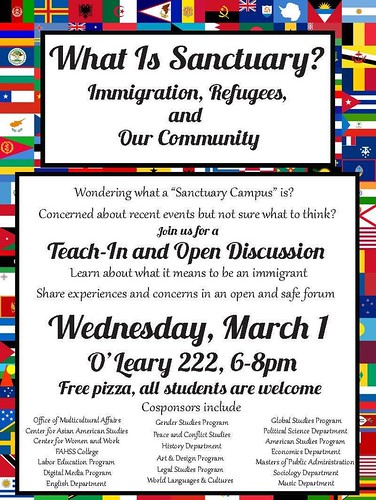 On Wednesday, March 1, 2017 from 6 to 8 pm at UMass Lowell’s O’Leary Library there is a free program called “What is sanctuary? Immigration, refugees and our community.” A Facebook page describes the event as follows:

Do you have questions about immigration and refugees? Concerned about recent events but not sure what to think? Are you wondering what a “sanctuary campus” is? Do you want to share your stories as an immigrant or refugee? Do you want to talk about your experiences since the election? Please join us for a short teach-in, shared stories (including open mic), and open discussion. FREE PIZZA!!! All are welcome.

The next night (Thursday, March 2, 2017, also from 6 to 8 pm), the Cambodian Mutual Assistance Association will host a “Know Your Rights” seminar at the CMAA headquarters at 465 School Street. The program will be presented by the American Immigration Lawyers Association and Political Asylum/Immigration Representation. An event Facebook page has more details.

DIY Lowell – On Friday, March 3, 2017, from 6:30 pm to 9:00 pm, DIY Lowell will sponsor a Community Chill Night at the Onyx Room of Western Ave Studios to kick off the 2017 DIY season. The event will feature a chili contest, cash bar, music, and a DIY dessert bar. A donation of $5 is requested but not required, and all are invited to attend. More information is on the event Facebook page.

DIY Lowell was founded in 2015 as “a citizen initiative to help the community brainstorm, vote on, & implement small-scale events & projects using an online forum and summit.” Last year, DIY Lowell erected a temporary downtown history trail and participated in the popup park on Merrimack Street. 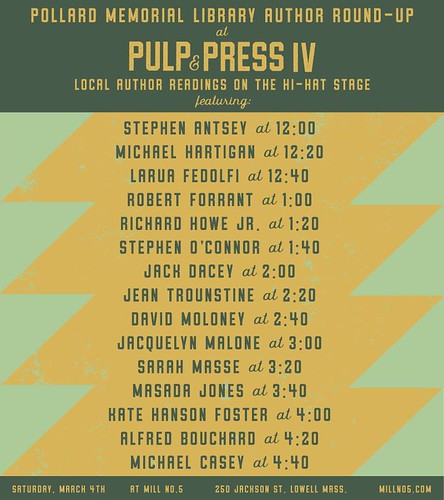 Local Author Roundup at Mill No. 5 – Next Saturday, March 4, 2017, from noon to 5 pm, the Pollard Memorial Library has organized a gathering of local author’s and publishers at Mill No. 5’s Pulp and Press event to offer locally themed and authored books for sale and to read from those books. The schedule of author readings is shown above. Most of the authors and their books will be at Mill No. 5 throughout the afternoon. 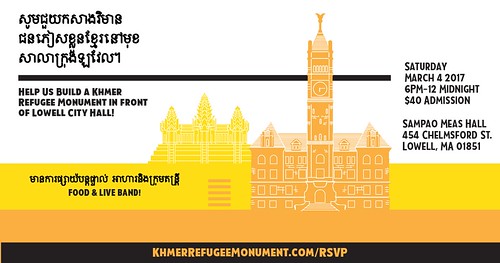 Cambodian Statue – The city’s Cambodian community is raising funds for a monument to be placed on the grounds of Lowell City Hall. A fundraising dinner will be held next Saturday, March 4, 2017, from 6 pm to midnight at Sompao Meas Hall at 450 Chelmsford Street in Lowell. More information is available on the event Facebook page, and tickets are available online through MKTix. 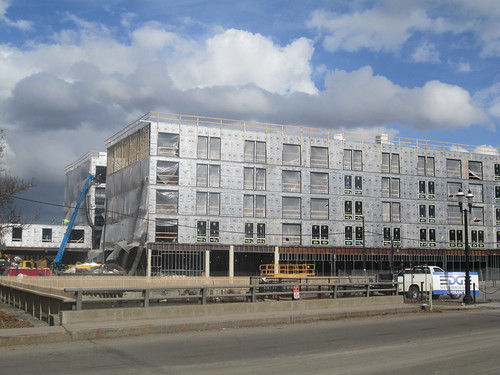 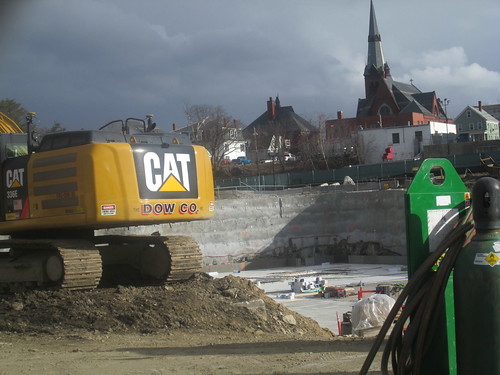 Lowell Justice Center – Although it’s tough to see beyond the 8-foot high fence guarding the construction site, work on the Lowell Justice Center continues. Through a crack in the green fabric fence, you can see the foundation and basement level of this seven story building taking shape.

We’ve had Winterfests in subzero weather, and others cancelled because of too much snow, but I can’t recall a prior Winterfest at which so many people were walking around in t-shirts and shorts. The near 70 degree temperatures of the past few days made for perfect weather to get out of the house and hang out downtown for a few hours. Congratulations to all involved in staging this great event. 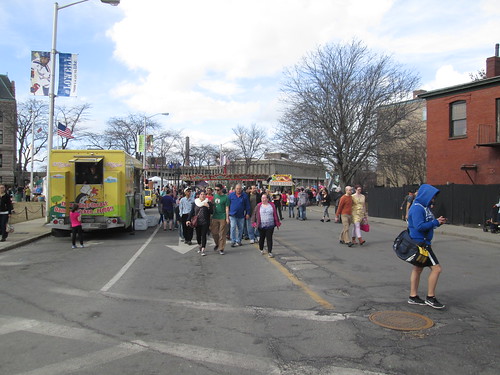 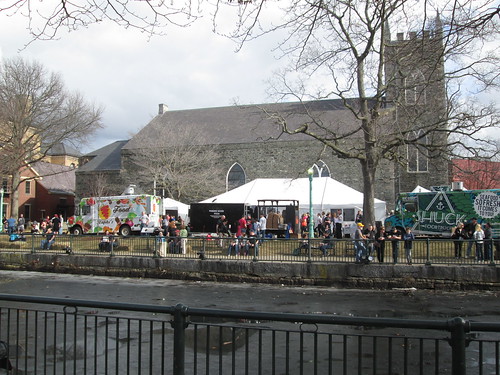