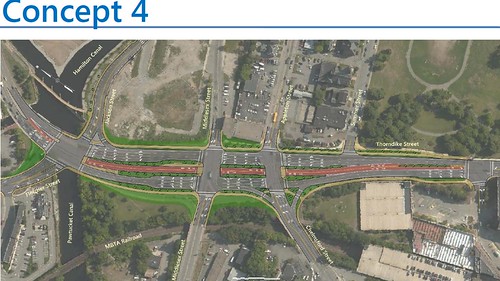 At some point in tonight’s football game, Tom Brady will spot an opposing player who is slow getting off the field and the Patriots will scramble to snap the ball. In doing that, New England often forces a “too many men on the field” penalty on their opponent.

The political equivalent of this “quick snap” seemed to occur with the Lord Overpass at Tuesday night’s council meeting, and I thought it was great. Unveiling the latest (and final) proposal for the Lord Overpass redesign for the first time at the 5:30 pm at the Transport Subcommittee meeting, City Manager Murphy had the full council unanimously endorse the proposal less than two hours later. Design work will soon be underway.

Tuesday night’s plan, called Concept 4 (and shown above), was much like the design first presented at a community meeting last March. Almost all of the 100+ in attendance that night embraced that concept as something bold, exciting, and more favorable to walking and biking than would be a simple remake of the 1960s-era highway interchange that is today’s Lord Overpass. But soon thereafter, the loud reactionaries in the city who view bike lanes and pedestrian amenities as a plot to take away privately owned motor vehicles, tore into the proposal, weakening the support for it.

On Tuesday night, by going from unveiling a “new” proposal to a final vote on it in just 120 minutes, Manager Murphy snapped the ball before the negativists were ready. That doesn’t mean they won’t complain; but it does mean their complaints won’t influence the council vote since that’s already been taken.

Enough about tactics. What about the substance of the proposal? I like it and believe it has great potential to draw together the Hamilton Canal District and, by extension, all of downtown, with the adjacent Acre and Highlands neighborhoods and, most importantly, the Gallagher Terminal.

However, make no mistake: but for the Hamilton Canal District, particularly the under-construction Lowell Justice Center, there would be no new design of the Lord Overpass, just a remake of the old.

Put on your imaginary virtual reality goggles and get off the Lowell Connector inbound at Thorndike Street and head for the Justice Center. The main entrance to that facility is the extension of Jackson Street which intersects Thorndike just opposite Fletcher. You speed along Thorndike, pass underneath today’s Lord Overpass, and turn right onto Jackson Street. Only you can’t, because the down ramp from the Lord Overpass blocks the way. If the Lord Overpass was simply remade in its current configuration, your inbound trip from the Connector would require you to go up the ramp that starts at the South Common, pass through two sets of lights to get across the Overpass, then descend the down ramp and at its bottom, turn right onto Jackson Street. That would be laughable and so another way needed to be found.

The primary driver of Concept 4 is, by far, access to Jackson Street. All of the improvements for bikes, buses, and pedestrians are a fortunate collateral consequence of that.

From a pedestrian standpoint, the new design is far from perfect. For example, walking from Chelmsford Street to Appleton Street will require you to cross multiple traffic lanes in two bounds, but it will still be much better than what is there now. To steal a term from evolutionary biology, Concept 4 is a “transitional form,” something that links an old thing to a new thing that doesn’t yet exist. Without that transitional form, you never get the new thing. As Councilor Rodney Elliott said during the debate on the proposal, for decades we’ve tried to improve the Lord Overpass with little success, so perhaps it is time to try something different.

Also, it is important to look at the Lord Overpass project as part of a much larger remake of that part of the city. Besides the Hamilton Canal District, you have the Thorndike Exchange development, $7 million in upgrades to the South Common, and traffic changes related to but distant from the Overpass. These include widening the Thorndike Street on ramp to the Lowell Connector to two lanes, allowing left turns from Highland Street onto Thorndike Street, making Church Street from Lawrence to Gorham streets two way to allow cars coming from Andover Street to continue straight onto Appleton Street, and extending Broadway across Dutton and into the middle of the Hamilton Canal District.

I believe that there will be another public meeting in the coming months so that designers can present this plan to anyone interested and solicit feedback. I doubt the overall design will be changed, but there is undoubtedly room for refinements. 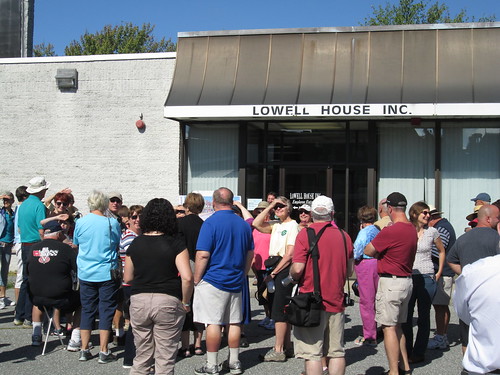 Tuesday the council also received an update on a proposal by Lowell House to replace its existing facility on upper Merrimack Street. For 35 years, Lowell House has had an addiction treatment facility on Merrimack alongside the Suffolk Canal. This year, the organization has teamed with Coalition for a Better Acre to propose replacing the existing one-story structure with an entirely new building that would have the same type of treatment center on the ground floor, and would add “sober housing” to its upper floors.

City Manager Murphy and several city councilors said on Tuesday that they supported the mission of Lowell House but just not at that location. Other councilors were emphatic in their support for Lowell House (and for the service it provides the community) and disagreed with the “we support you but just not here” approach.

This is a tough issue. Deaths from opioid overdoses continue to skyrocket in Lowell. That alone is compelling evidence that more treatment options are desperately needed. But no one ever wants the treatment place in their neighborhood. Everything I’ve heard about Lowell House has been positive, and Coalition for a Better Acre has a tremendous track record in Lowell of building—and perhaps more importantly, maintaining—outstanding housing projects.

Hopefully councilors (and everyone else) will stay on top of this until the issue is resolved. (To read councilor comments, check out my report on Tuesday night’s council meeting).

A press release from UMass Lowell last week welcomed the new partnership between the University and the Merrimack Valley and Lowell Regional Transit Authorities. This arrangement will allow students and employees to ride transit buses for free simply by showing a UMass Lowell ID card. Well, it’s free to the employee or student; UMass Lowell will pay the fare afterwards.

This is great news both for those at the University who will use the service and for everyone else in the city. The more people who ride buses, the fewer cars we will have on our streets. That’s the only real way to reduce traffic congestion.

It looks like a relatively quiet city council meeting this Tuesday, although there are eleven motions on the agenda. Here they are:

The Lowell School Committee met last Wednesday. Amy Bisson has a full report on her blog.

Congratulations to all who participated in yesterday’s Boston Women’s March and to those who travelled to Washington, DC for the march there. My Facebook and Twitter feeds were filled with pink hats and poignant, hand-lettered signs.

Certainly since the election, I’ve repeated the refrain that “all politics is local.” That’s because in a presidential election year, we see 30,000 people vote in Lowell, while in a city council race we’re lucky to get 10,000. To me, this is backwards because the people serving on the Lowell City Council have a much greater impact on our day-to-day lives than does the president of the United States.

If you want to get more involved in politics at the local level, you have a chance this Monday night when Lowell Votes kicks off its third year of helping all Lowellians participate in the electoral process. The meeting is Monday, January 23, 2017, at 6:30 p.m., at the Pollard Memorial Library. Everyone is invited to attend.