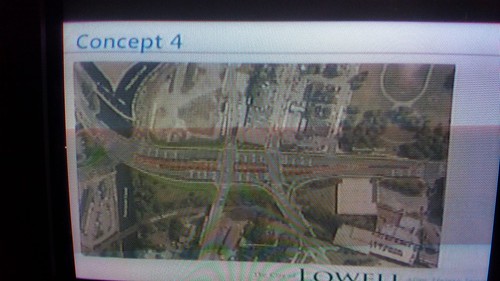 Topic is Lord Overpass. City Manager Murphy explains that the success of Hamilton Canal rests on access to it, so Thorndike Street and the Lord Overpass is crucial to that project. Nicholas Bosonetto, the city traffic engineer begins. Mass DOT is providing $15mil for this project, but since we are taking state funds, we have to design it in accordance with their requirements. Explains the current Lord Overpass is a highway interchange that doesn’t blend well into the surrounding neighborhood. We want something that fits the surroundings. Also, it’s a gateway to the city so we want visitors to get a sense that the city is modern and easy to navigate and make a good impression. The design also must be done in accordance with our complete streets program so that it meets the needs of all users, not just motor vehicles. Finally, it is important to accommodate the Gallagher Terminal and to connect the neighborhoods that border it better.

There are three segments to this project. First is the Overpass itself; second is widening Thorndike at Gallagher Terminal, Highland Street, and third is the Lowell Connector on ramp (which they want to be two lanes wide).

Concept one is keep Overpass as is and build the Jackson Street extension. The problem with this is you can’t turn left into Jackson Street. Concept two filled in the Lord Overpass, created at grade intersections, and facilitated turns into Jackson St. Concept three added the multimodal element with more bike lanes, pedestrian lanes, and dedicated bus lanes (bus lanes were on the outside because we were still contemplating a trolley system then – now we know there is not going to be a trolley extension). Concept four puts transit lanes in the middle.

The seven criteria used to assess these various designs are safety, economic development, capacity of traffic, connectivity and accessibility, mode choice, community aesthetics, and transportation equity (there are from the DOT design guide).

Safety – no sidewalks on much of overpass, people running across lanes, large number of crashes (235 in four years). From safety perspective, fill-in is preferable.

Access to Hamilton Canal (economic development) – Keeping overpass as is would require inbound traffic for Hamilton Canal would have to go over the Lord Overpass or have to turn right, going across the down ramp. Also, the left turn into Fletcher St would be expanded to two turn lanes. Filling in the overpass makes it easier to get into Hamilton Canal District.

The fill in option is much cheaper than repairing the two overpass bridges. The savings in money would pay for the Connector on ramp project. Now, downtown traffic moves very fast to the Gallagher Terminal and that speed is a safety problem. The fill in option would have synchronized traffic lights at Middlesex Street and Appleton Street which would minimize traffic backups. Coming from Andover Street, they will make Church Street two way, so Andover Street would run directly into Church and then Appleton Street to Thorndike (this would be a separate project).

Councilor Milinazzo asks about the railroad tracks underneath Middlesex Street. Answer: Current elevation of Middlesex and Appleton would stay the same, but Thorndike would follow the elevation and slope of the current ramps.

Councilor Belanger asks if there will be another public input session? No, because the public has already shared its ideas. We will have a public meeting to explain the concept. Belanger asks whether outbound traffic will now be slowed. Answer: All of the intersections will be new and so will the traffic lights; they’ll all be working together and the traffic will move more rapidly through the corridor. Right now, the lights are not connected.

Mayor Kennedy asks to consider Lord Overpass as two bridges rather than a traffic circle. He is worried that outbound traffic will not be slower with the fill in version and believes keeping the bridges will help that. He says that’s why the overpass is there in the first place. Says he doesn’t have as much confidence in the synchronized lights. Kennedy suggest eliminating the down ramp from the overpass to inbound on Dutton Street saying that would allow incoming cars from the connector to turn into Jackson St. Consultant says doing that would push more cars onto other streets; also says this would make it safer and more useful for pedestrians. Traffic engineer sites expansion of MACOM on Chelmsford Street as a reason for filling in the overpass because moving from the Connector to Chelmsford St is easier with the fill in option. That’s an example of balancing the various needs.

Councilor Belanger moves to accept Concept Four and recommend it to the full council. Seconded by Councilor Leahy. All three members vote for the motion and congratulate the traffic engineer for all the work put into this plan.

Councilors comment on various motion responses that were provided to them prior to the meeting.

Lowell House Expansion Project. Councilor Belanger says he fully supports the mission of Lowell House, but this project on upper Merrimack Street contemplates expanding from a drop-in treatment center to a residential facility. Manager Murphy says he’s met with Lowell House, that he supports their mission, but we’ve learned through the Working Cities grant is that one reason the Acre remains poor is because it has too much subsidized housing and too many social service facilities. The city is working with Lowell Community Health Center and Lowell House about the possibility of co-locating some of this with LCHS’s existing clinical treatment facility. Murphy says the city will assist them in expanding their program, just not on upper Merrimack Street.

Councilor Mercier says she does not agree with this approach. She supports Lowell House and its mission. She says she doesn’t agree with the “we support their mission, just not there” approach. Manager Murphy guarantees that the city will find a suitable place for Lowell House. Councilor Milinazzo says he disagrees with the city manager’s comments about Lowell House. He says Lowell House has a good plan and that the investment they plan to make will enhance the neighborhood. He said we all got behind the Meghan House even though we doubted it would work in its location, but it has turned out to be a terrific neighbor that provides great services. He feels Lowell House and CBA should be given a chance. He says they feel the city is not serious in helping them.

Councilor Elliott says he agrees with the city manager’s approach. That between expanding UMass Lowell and growing businesses on the upper Merrimack Street corridor, expanding Lowell House in that location does not make sense.

Councilor Samaras refers to Working City grant. Says key to helping residents of Acre is providing jobs and improving education. He doesn’t want to get into a fight about placement of Lowell House, but he is supporting the city manager’s efforts to find another location of Lowell House. Councilor Leary is willing to let the city manager continue on the current path. Councilor Rourke (who is a probation officer at Lowell District Court) says he would hate to see the proposed facility lost. He hopes the city manager can reach a mutually agreeable solution with Lowell House but he believes having the facility in Lowell, even on Merrimack Street, is vitally important to the community.

Transportation Subcommittee Report. (See my full report on this meeting at the beginning of this post). Subcommittee Chair Rourke summarizes the presentation made about the recommended design of Lord Overpass. Rourke says City Manager’s office, Traffic engineer, and consultants overwhelming support Concept Four. Rourke has traffic engineer give the entire council an overview of Concept Four (again, see above). Rourke moves that the full council accept Concept Four.

Councilor Leary askes about coming from the Highlands. Traffic engineer says Concept Four will give you much greater access to downtown; that this design connects the various sections of the city much better. It gives much greater access to Thorndike Street. The more options we give people, the more traffic will spread out and the better mobility will be. Because of their extreme width, Appleton and Chelmsford should be the main thoroughfare from the Highlands rather than Middlesex Street. Also, pedestrian access will be much improved. Traffic engineer says current Lord Overpass is both a physical and mental barrier to walking whereas this new design will be like a normal city street and will be much more inviting to walkers. Leary asks about the center bus lane. This will allow buses to move more efficiently, to bypass traffic so routes run on time. Also, emergency vehicles will use the bus lane to increase response time.

Councilor Belanger says Concept Four is the end result of a number of community input sessions. Says this plan alleviates many of the concerns raised at those sessions. It will be much safer. Says he supports this plan.

Councilor Elliott says for as long as he’s sat on the council, we’ve tried every other option to improve traffic at Lord Overpass without success, so this is worth trying. We have to try something different to move traffic in and out of the city and that’s an impediment to economic development. If we don’t improve access to Hamilton Canal, we’re going to keep chasing our tail. He will support Concept Four, mostly because it will improve Hamilton Canal access.

Councilor Rourke emphasizes the two lane on ramp to Lowell Connector off Thorndike Street which should reduce much of the outbound traffic backup on Thorndike.

Mayor Kennedy says if he’s walking from the Highlands to downtown, how would it work. You would cross the outbound lanes and stop at the bus stop area, and then you would cross the in bound lane at the next light cycle. Kennedy asks when would construction commence and how long would it take? Traffic engineer says if council votes for this tonight, hope would be to finish design by April 2018 with two year construction period, so it would be finished in April 2020 to coincide with opening of the Judicial Center.

Councilor Jim Leary asks that the City Manager explore the feasibility of working with the Middlesex Sheriff’s Department in order to have a regional holding facility that would replace our LPD holding facility.

Councilors Leary and John Leahy ask that the City Manager provide an update regarding the closing of the Eastern Bank location in Centerville, its economic impact on the area and recommendations to address the impact and improvement of the overall business district.

Councilors Leahy and Dan Rourke request that the City Manager work with the Lowell Fire Department to explore all possible means to replace the turn-out gear of the department.

Councilors Samaras and Rourke – Req. City Mgr. meet with the administration of UMass-Lowell, Middlesex Community College and the Lowell School Department to discuss their role in the educational planning of the new Lowell High. Councilor Samaras explains that this is not intended to encroach on responsibility of the council or the school committee, but he want to make sure that a new facility be compatible with what UML and MCC are doing.