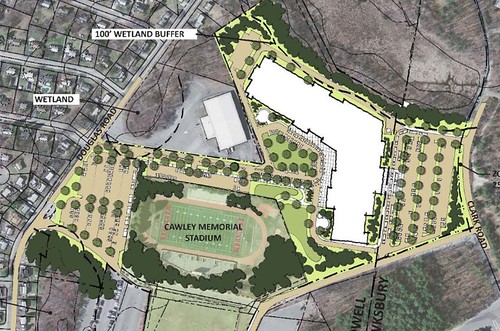 On the front page of the city’s new website, there is an icon for Lowell High School Project which links you to key documents, meeting minutes, and reports and presentations. Of particular note will be the slides from the January 5, 2017 presentation to the School Building Committee. There are only ten slides in this collection, but they portray seven options (with pros and cons for each), five of which are based on the existing downtown site. Here’s a synopsis of each:

Where to put Lowell High was a major topic of discussion at last Tuesday’s city council meeting. Councilors Corey Belanger and John Leahy presented a motion asking that the LHS architect come before the council and explain why the South Common was not selected. The councilors who spoke favorably on this motion framed it as a quest for information.

School Committee member Steve Gendron, who is on the School Building Committee and who had unsuccessfully argued at that committee’s meeting that the South Common be included in the final group to be considered, had registered to speak on this Belanger/Leahy motion. Here are my notes on what he said to the council:

Steve Gendron registered to speak. Says he is the lone school committee representative on the School Building Committee. He says at its last meeting, he requested that Committee restore the South Common to the list to be considered. He says the downtown location is probably best for the school but he thinks it’s important to have all of the options on the table. He has a chart that Skanska provided (he distributes it to councilors). Explains that the chart shows the seven options considered. The three bottom were easily rejected and the top three rose to the top. He says the South Common “was on the bubble” primarily because the land is owned by the state and is protected by Article 97 which protects green space. But he says the state can give a waiver which can take a long time. That contributed to the rejection. But then he thought about the three options (Wang School and Cawley) which he says have some detriments, like being on the outskirts of the city. Says they will require more busing each year. Also, both locations are in or bordering single family suburban districts which we want to protect. He says dropping a large high school in a single family zone could be a detriment to the city. Says when he thought about South Common, he felt it is centrally located, it’s directly across from the LRTA terminal. He says it is not too small, that it’s three times larger than the downtown location. He also wants to reach out to the state delegation to explore how long it would take to get the waiver to use the South Common.

The councilors who spoke in opposition to this motion argued that there was a procedure in place, that the procedure had rejected the South Common, and that the council should not be second guessing that process. After much debate, the council defeated the South Common motion with Councilors Dan Rourke, Jim Milinazzo, Rita Mercier, Bill Samaras, and Rodney Elliott voting against; and Councilors Corey Belanger, John Leahy, Jim Leary, and Mayor Ed Kennedy voting for. (If you missed the council meeting, please check out my online report).

According to these same slides, the next major step in this process is for the school committee to review and accept the Education Plan, which lays out how Lowell High School could best accomplish its mission of educating students, which in turn would guide the architects in their design of the new facility, especially its interior. The draft education plan will be presented to the school committee at this Wednesday’s School Committee meeting (the 45 page education plan is online as part of this week’s school committee packet). The committee will review the plan at the subcommittee level and the entire committee, according to the architect’s timeline, is expected to vote on the plan at its February 1, 2017 meeting.

The agenda for this week’s city council meeting seems relatively light. The new ordinance that will increase many fees charged by the city will be presented to the council which will presumably schedule a public hearing on the ordinance which is in the online council packet (and is 70 pages long).

There are also four council motions:

Councilor Jim Leary asks that the City Manager explore the feasibility of working with the Middlesex Sheriff’s Department in order to have a regional holding facility that would replace our LPD holding facility.

Councilors Leary and John Leahy ask that the City Manager provide an update regarding the closing of the Eastern Bank location in Centerville, its economic impact on the area and recommendations to address the impact and improvement of the overall business district.

Councilors Leahy and Dan Rourke request that the City Manager work with the Lowell Fire Department to explore all possible means to replace the turn-out gear of the department.

The Planning Board meets this Thursday, January 19, 2017, at 6:30 p.m. in the City Council Chambers. New business on the agenda is site plan review and special permit approval for six new townhouse units at 984 Central Street (which is near the intersection of Central and Gorham, at the far side of the Lowell Connector). 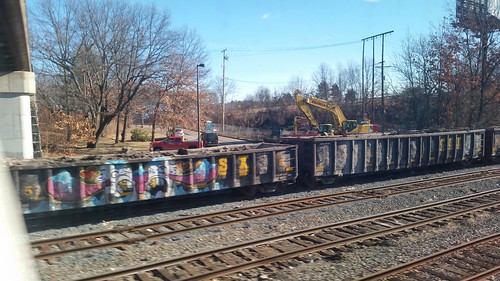 The Gallagher Terminal resembles a construction site these days in two ways. Alongside the exit road from the terminal to YMCA Drive, in the shadow of the Lowell Connector, work is underway on the tour bus parking site that the city acquired (above photo, taken from commuter rail train). This space will be used for the parking of tour buses whose passengers are visiting Lowell National Historical Park once the existing NPS lot off Dutton Street is transferred to the city for development as part of the Hamilton Canal District.

We moved this website to a new hosting service this week, both to better handle visitor traffic (a problem we welcome having) and to allow us to better fend off cyberattacks. Whether you are an individual computer user, a local police or school department, or the Democratic National Committee, if you use a computer or an internet-connected device, you’re a target of hackers and you must plan accordingly.