Another essay by Bob Hodge, a 1973 graduate of Lowell High School, a 1990 graduate of University of Lowell, and one of the greatest runners to come from Lowell – ever. Bob has previously contributed, Running Down a Dream: Cohasset by the Sea Road Race, April 1978, School Daze Lost in Time and College Aborted, College Regained. In this story, Bob recalls a New Year’s road race forty years ago.

New Year’s Eve 1977, same as it ever was. I had just arrived home from work at the supermarket, hoping to catch Dad in a good mood.

“Dad, can I borrow the car tomorrow?”

“Where are you heading?”

“Down to Boston for the run from the Eliot Lounge to Scituate, same as last year, but I need to get back home for work on Sunday.”

Her was his 1966 Chrysler, a magnificent beast of a car, a veritable land yacht. Now that my ride was set for tomorrow, it was time to review options for the evening. It was nice to have options, but sometimes tough to decide between my friends from Lowell and my college friends and fellow runners.

The two groups had little in common and hardly knew each other. I had recently left school, and no longer being a student I fell back into a routine of hanging out in bars with my Lowell friends playing pool.

Richelieu would be picking me up soon in his T Bird and would have his girlfriend Lee Ann and a few other buddies with him. We would drive around town, meet up with other youthful revelers, hang out in parking lots and bar rooms, and eventually head to a house party or two.

Hopefully, everyone would survive the evenings descent into debauchery again this New Year’s Eve.

I dressed in my usual: jeans, construction boots with white sox, and because it was a special occasion an Oxford shirt instead of the usual flannel. The piece de resistance was the leather jacket, heavy cowhide, double-breasted, and no one I knew, perhaps no one on earth, had one like it.

I would be hoping to meet a girl and have someone to hold at midnight. Nah. I did chat up a girl, but at midnight she was with a fighter so I downed my beer and grabbed another. My friend Ronnie and I talked about our plan to travel around the country for up to a year visiting national parks and places of interest but also just shaking off Lowell.

I began anticipating my run the next day, and decided it was time to slip away from the party. I started walking home, soon breaking into an easy run. My eyes were tearing up from the cold and my vision was playing tricks. The few streetlights cast a heavenly halo on the crusty icy snow crunching under my boots.

I was soon home. I took off my boots and tip-toed into the bathroom where I stripped down and toweled off the moisture from my run home. I drank a few glasses of water and left one beside my bed remembering one of the many practical advice admonitions we always got from Coach Squires of the Greater Boston Track Club. I looked at the alarm clock, 3 a.m. My head hit the pillow, over and out. Up early, I grabbed my gear and went outside to fire up the Chrysler. I picked up Vinnie at his apartment, and we made a quick stop for coffee and donuts to fortify us for our long run. 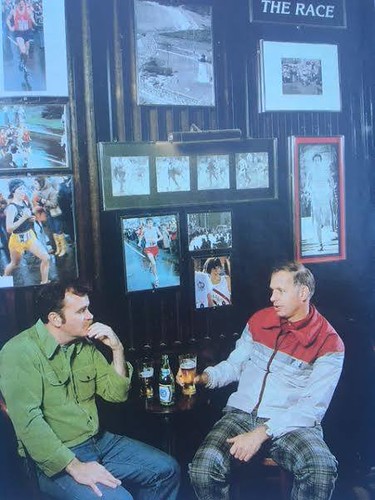 It was a smooth ride to Boston on a sleepy New Year’s Day 1978. We sidled the Chrysler into a parking spot on Newbury Street and headed over to the Eliot Lounge. This year the run drew more people as the word had spread about the good times the year before. Tommy Leonard greeted everyone on arrival and served up water and cranberry juice. A concoction he called a Sea Breeze.

We all got organized, placing our clothing in different vehicles that would form a parade of support crew cars all the way to Scituate. Off we went, a large group, but not for long because a smaller, faster-paced group emerged with the usual suspects. In the dynamic of group runs it nearly always evolves around someone who is having a day and who else is doomed to struggle. The constant among our small group was that Bill Rodgers would cover every move and would look perfectly effortless in doing so.

There was plenty of friendly banter in the beginning, and anyone pushing the pace too heartily would be called a wanker and severely ridiculed by the group. As it so happened I was not feeling particularly good. But as the run proceeded I began to come around. My head cleared, and the easy rhythm of the group in unison as we glided past Wollaston Beach gave me a superior feeling of wellbeing and a thankfulness for being alive.

At the two-hour mark, the six of us grouped and began to look forward to finishing this thing and warming ourselves at the Jones family hearth. Unfortunately, we had missed a turn and now were soon moving farther away from our destination. We took the next turn toward the water, and at the three-hour mark we landed in Scituate Harbor, a few miles beyond our goal.

From a pay phone we called the Jones’s, who came to our rescue, even providing beverages for the short drive to their home. How sweet it was.

After showering one by one, we hunkered down by the fire with a bowl of chili and a beverage—a group of happy souls contented by our efforts. Sharpless Jones and the entire family were the most gracious hosts in their wonderful home on that holiday.

Later in the evening Vinnie and I got a ride back to Boston with Billy and Ellen. I called my dad before leaving Scituate to give him my ETA. We arrived back on Newbury Street, hopped in the Chrysler, and made way for Lowell. As I exited route 93 North onto route 3 North for Lowell I looked at the fuel gauge: Empty! I mentioned this to Vin. “No problem, Hodgie, we’ll make it”

Ten miles outside of Lowell the Chrysler began to lose altitude; I coasted into the breakdown lane, hit the hazard lights, and cussed myself out. Although there was an exit coming up, we decided to wait it out until law enforcement came to our rescue.

The State Police arrived eventually and called a garage to bring us a few gallons of gas. We had the money for a few gallons but his fee was $25.00 for bringing the gas. That was pretty dear, considering gas was 50 cents a gallon. I arranged to pay him on Monday the next week.

I got home around 11 p.m., and I didn’t even try to lie my way out of it, lacking the imagination and energy. My dad stroked his chin and said quietly, “Knuckleheads.” Then he smiled, laughed, and tousled my hair. “How was the run?”