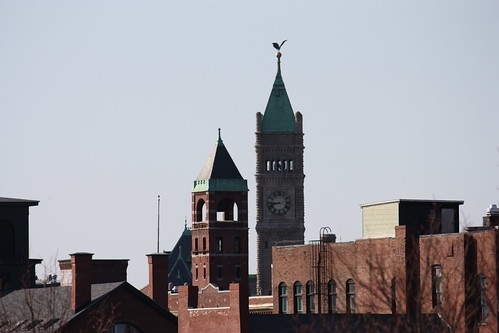 Here is my own eclectic list of important things that happened in 2011.

The local political lineup changed considerably in 2011. Steve Panagiotakos, who was elected to the Lowell School Committee in 1989, the Massachusetts House in 1992, the State Senate in 1996 and had most recently served as chair of the Senate Ways and Means Committee, chose not to run again in 2010 and so spent his final days in the State Senate in January 2011. He was replaced by Eileen Donoghue, a former six term Lowell City Councilor (1996-2008) and two term mayor (1998 and 2000), who won the 2010 State Senate race after running unsuccessfully for Congress in 2007. The Lowell City Council lost its longest serving member when Bud Caulfield, who had been elected to twelve consecutive terms beginning in 1987 (with two – 1995 & 2007 – as mayor), chose not to run for re-election. The Council also lost Jim Milinazzo, who had served four terms beginning in 2003 (mayor in 2009) but who was defeated in 2011, and first-term Councilor Franky Descoteaux, who did not seek re-election. John Leahy, who was elected to five terms on the Lowell School Committee beginning in 2001, lost in an effort to join the City Council. Jackie Doherty, who was elected to four terms on the School Committee beginning in 2003, lost re-election as did first-term committee member Alison Laraba.

Weather was a major story throughout 2011. Major snowstorms hit Lowell on January 12, January 18, January 21, January 27 and February 1. A fall snowstorm at Halloween knocked down countless trees and electrical wires, leaving many residents without power for five or more days. Many other experienced similar power outages at the end of August when high winds from Hurricane Irene caused extensive damage.

The once-per-decade Congressional redistricting substantially altered the map and the lineup in Massachusetts. The historic, Lowell-centric Fifth Congressional District is now the Third, gaining Fitchburg and a number of other communities in northern Worcester County while keeping the core Merrimack Valley portion of the district largely intact, aside from Billerica and Tewksbury which are now part of the Sixth District. Outside of our area, redistricting caused two long-time incumbents, John Olver and Barney Frank, to announce they would not seek reelection this year.

The UMass Lowell physical renaissance continued with substantial progress apparent in the construction of two new buildings, the Health and Social Science Building on South Campus and the Emerging Technologies and Innovation Center on North Campus. In January, UML purchased the former St Joseph’s Hospital and the revitalized Tsongas Center and UML Inn & Conference are drawing more and more folks to downtown Lowell.

After a contentious and controversial period of negotiations with the School Committee, Lowell Public Schools Superintendent Chris Scott decided not to seek a renewal of her contract. She was succeeded by Jean Franco.

Mike McLaughlin, whose strong ties with Greater Lowell include past employment with the Lowell Housing Authority, the Dracut School Department and who was formerly a candidate for Lowell City Council and Lowell City Manager, was the subject of a Boston Globe expose on the astounding salary and benefits he received as Director of the Chelsea Housing Authority. The negative publicity surrounding McLaughlin may have tainted the future political prospects of Lt Governor Tim Murray, who had close contacts with McLaughlin and perhaps even Scott Harshbarger, who allegedly sought to intervene with Governor Patrick on McLaughlin’s behalf.

Lowell City Manager Bernie Lynch and 19 city unions reached an agreement on the future of health insurance coverage for city employees. This is a huge, long-term accomplishment that has yet to receive the positive attention it deserved.

UMass Lowell became a player in national politics with the creation of its Center for Public Opinion, the polls of which are frequently quoted by media outlets around the country. And UML’s Massachusetts Democratic Senate debate gained national acclaim as the initial debate appearance of Elizabeth Warren whose strong performance at Durgin Hall cemented her standing as the front-runner in the Democratic race, caused the strongest of her Democratic opponents to drop out, and allowed the focus to shift to a Warren v Scott Brown race next November.

It was a great year for what I might clump together as local and regional entertainment. Leymah Gbowee, who resided at UMass Lowell as a Greeley Scholar for Peace was awarded the Nobel Peace Prize. In Hollywood, “The Fighter” won Academy Awards for Best Supporting Actor and Actress. The Bruins won the Stanley Cup and the Red Sox collapsed, losing Theo Epstein and Terry Francona in the process. Billy Joel and the Dropkick Murphys played at UML venues. The legislature authorized casinos. Lowell celebrated the 175th anniversary of its incorporation as a city and the 150th anniversary of the start of the Civil War.