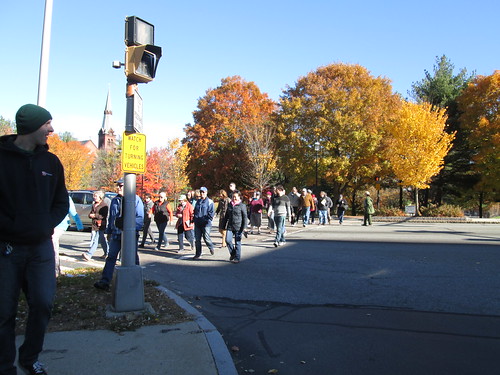 I often write about walkability. Making Lowell a more walkable city – and getting more people walking, biking, and using public transportation – would yield many benefits. Here are a few:

Last spring, GE (formerly known as General Electric) stunned many when it announced it was moving its corporate headquarters from suburban Connecticut to downtown Boston’s Seaport District. Yes, there were plenty of city and state tax incentives, but GE cited other reasons. According to Forbes,

[GE] wanted to move to a place that had a walkable urban environment and access to transit. GE also wanted to be in a vibrant, innovative environment that would be stimulating to workers. Boston certainly fits the bill.

GE’s move is as much a reaction to trends as it is a proactive measure. Why? Demographics. Young talent, particularly educated tech talent, is relocating as well. They’re moving to large cities, and jobs are following. Corporations want to be where the talent is. . .

Today’s educated young adults are attracted to cities by the things GE cites are reasons for its move — walkable urban environments that often stand in sharp contrast to their suburban upbringing; access to public transit that can make a car an option rather than a necessity; educational, entertainment and cultural amenities that add to the dynamism and vitality of cities.

Walkability is not a plot to outlaw the private ownership of motor vehicles. It’s an economic development strategy.

I recently came across a 1973 state study on the proposed Route 213 which proposed a Lowell Connector-like highway that branched off Route 3 near the Drum Hill Rotary, then headed north, through Hadley Field with a bridge over the Merrimack River and Pawtucket Boulevard, then ending on Mammoth Road where West Meadow Road now intersects. The reason for this plan? “Extreme congestion occurs at all bridges in Lowell during the peak hours of traffic flow, and it is primarily this condition that the proposed project seeks to alleviate.”

That “extreme congestion at bridges” comment was written 43 years ago, but it sounds like something uttered at a recent city council meeting. Experience shows that widening roads and bridges does not reduce congestion; it does the opposite. It attracts more traffic. Recall how the widening of Route 3, last decade’s cure-all for traffic congestion, merely made two lanes of bumper-to-bumper traffic into three lanes of the same.

Urban planners today cite “mode shifting” as the best strategy for reducing traffic congestions. That means getting more people to walk, bike, ride public transportation, and to live closer to where they work. So if you feel frustrated by Lowell’s traffic jams, work to make the city a more walkable place.

Not a lot needs to be said about this. Walking is good exercise and everyone would benefit from more of it.

When you’re walking, you encounter your neighbors and others. You’re more likely to look at a window display, or spend money at a neighborhood business. You are able to admire the architecture of buildings, and the beauty of the landscape. In a car, you focus on not running into things while searching for a parking space, oblivious to all else.

The biggest obstacle to making Lowell a more walkable city is the absence of a shared vision of what Lowell should look like five, ten, twenty years in the future. We do have plans, Sustainable Lowell 2020 and Complete Streets to name two. They chart the course we should follow, but our elected leaders, even though they have voted for both plans, either ignore them or treat them merely as tickets to state money for road-widening projects.

So rather than follow an established plan that helps channel emerging opportunities into a widely shared vision of where the city wants to be a decade from now, we react to events as they happen.

Sometimes these reactions advance the cause of walkability, like three motions on this week’s council agenda:

But sometimes the reaction casts aside walkability. Read my transcript of last Tuesday’s city council meeting for examples of that.

These are all difficult decisions that should be weighed carefully. Walkability should not have an absolute veto on a planned business expansion, but neither should the interests of the community automatically take a back seat to the will of a business, even when that business, as so often happens, says “give me what I want or I’ll move out of the city.” That’s why a long term plan with broad (and sincere) popular, governmental, and institutional support is so important. Then, when an opportunity arises, it can be measured against that long term plan. Does it advance the shared goals or will it create an obstacle to achieving them?

Last week I wrote that the proposal to block the future River Meadow Brook Greenway with an expansion of the Gervais car dealership echoed the city council’s decision back in 1995 to close off Western Ave at Thorndike Street. Back then, what is now Western Avenue Studios was an automobile fabric manufacturing plant and the owner wanted the road closed at Thorndike Street, so the city closed the road. Now, the manufacturing plant is long gone and the building houses the largest collection of artists east of the Mississippi River. But the future viability of Western Avenue is threatened by the a railroad track that blocks pedestrians from walking the 75 yards from the Hamilton Canal Innovation District to Western Avenue Studios.

A report to the city council this week makes it clear that the blockage, in the form of an active railroad track, won’t be overcome any time soon. The report, in response to a motion by Councilor Leahy seeking a solution to this problem, states that the railroad refuses to grant a pedestrian crossing at grade and that a pedestrian bridge over the track would cost up to $6 million dollars and that “it is unlikely, given the existing prioritized transportation projects, that this project would be funded.” 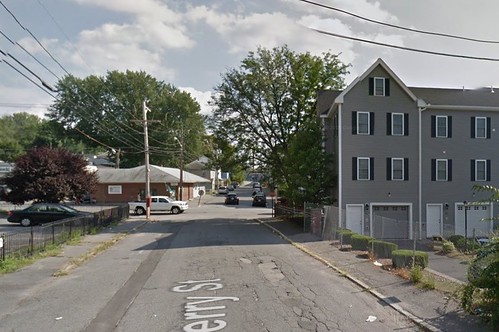 Who Enforces Regulatory Board Orders?

At last week’s meeting, City Councilor Rita Mercier made a motion that the Traffic Engineer find a solution to the parking of cars on both sides of Perry Street near Rogers Street (see photo above). Here is what Councilor Mercier had to say on the floor of the council about this motion:

This is a safety issue. She says that when the condominium complex on that corner was constructed, it was supposed to have adequate parking for its residents onsite, but now all the residents park on the street. She adds that many times developers go before boards like the planning board, agree to conditions like onsite parking, get permission to build, sell off the units, then no one follows or enforces the limitations set by the city boards.

This is something I witness every day. Back in 2006, Drake Petroleum petitioned the Zoning Board of Appeals for permission to demolish the existing gas station at the corner of Elm and Gorham Streets and to replace it with a self-service gas station and convenience store. The Planning Board granted to petition but imposed ten conditions. 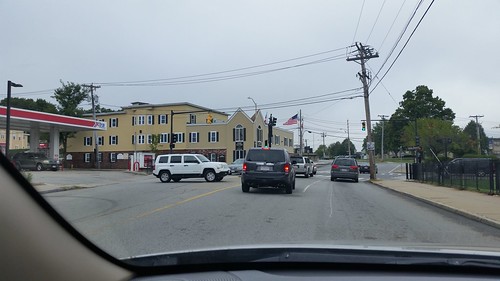 One of those conditions was “Right turns only are permitted onto Elm Street.” The reason for that condition is pretty clear from the photo above. A car emerging from the Elm Street exit from the gas station intending to turn left towards Gorham Street would block the oncoming lane of traffic, just as the white SUV in the above photo is doing. When the gas station first opened, there was a bumper sticker-sized “no left turn” sign on a stick at the curb cut. That disappeared about a week later and has never been replaced. Drivers leaving the gas station routinely try to turn left, and routinely block traffic.

Maybe when the report on Councilor Mercier’s Perry Street motion comes back to the council, someone will ask who in city government is responsible for auditing conditions imposed by the city’s regulatory boards. 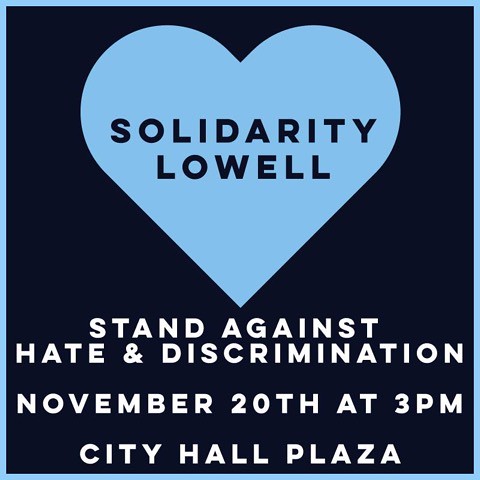 A group of local residents has organized a Solidarity Rally today at 3 pm at Lowell City Hall. The purpose of the event is to show that “we stand against hate and discrimination.” Here’s what the group’s Facebook event says about the rally:

AT THE RALLY: We have lined up a few speakers, and will also intersperse those with open mic slots which you can sign up for at the rally. Max 5 minutes (roughly) per person – the more succinct you are the more people we can fit in to speak. Keep in mind there are likely going to be kids in the audience. Bring your signs – anti Trump signs are fine, but we hope you also think to bring signs that reflect the Event Statement above, to stand in solidarity with the entire community.

Library Event on the 2016 Election

The Pollard Memorial Library has organized an event called American Perspectives: A Community Conversation on the 2016 Election on Saturday, December 10, 2016 from 9:30 am to 11:30 am in the ground floor meeting room. Here is what the library’s website says about the event:

As we move past one of the most divisive presidential elections in modern US history, now is a good opportunity to reaffirm our commonalities as Americans and begin the work of bridging what divides us. It is in that spirit, especially as an institution dedicated to equal access to information and education, the Pollard Library is hosting a non-partisan, civil and constructive community conversation on the 2016 Election and its impact on America. We hope you’ll join local educators, community organizers, and fellow citizens on Saturday, December 10th at 9:30am. Everyone Welcome. Coffee and light refreshments served.