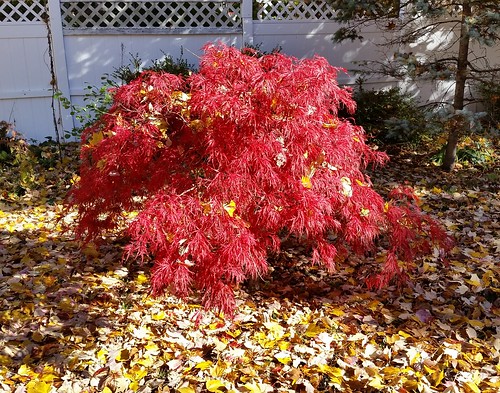 I heard someone say that the worst thing about turning back the clocks last night was that it inserted one more hour between us and the end of this year’s election. As I post this, the polls close in just 62 hours, but who knows when we will know the result. Even after the votes are counted, I don’t expect any calming in the country. On the contrary, I expect four years of turmoil and stalemate no matter who wins on Tuesday.

Thirteen days ago I voted unreservedly for Hillary Clinton for president, but I’ve tried to tune out much of the presidential campaign noise. My television only goes on for a few minutes each weekday morning to catch Haverhill’s Matt Noyes give the weather forecast on New England Cable News. Then I quickly turn off the TV before a barrage of political commercials invade my home.

Yes, I am down on national politics, but at the same time, I believe that “all politics is local,” so if you feel frustrated by the presidential election, consider making 2017 the year of local government.

It seems that early voting worked well. My own experience confirmed that and I haven’t heard anything to the contrary. Just under 8,000 people voted in Lowell (out of 54,000 registered voters), and more than 1 million voted statewide (out of 4.5 million registered voters).

The early voting window closed Friday night, however, so if you did not participate, the polls open on Tuesday at 7am and stay open until 8pm. If you’re not sure where you are to vote, check out the “Find my election information” page on Secretary of State Bill Galvin’s website. Entering your street number and your zip code and the website will give you the name and address of your polling place.

The city council has a light agenda this coming Tuesday night which is fitting for presidential election night. Last Tuesday’s council meeting was largely uneventful, although Councilors Jim Leary and Jim Milinazzo had a motion get the Lowell Regional Transit Authority and UMass Lowell to start coordinating their respective bus services. This has huge implications for public transportation in Lowell, assuming it is treated seriously by both parties. The motion passed, so I expect there will be a report back to the council in a few weeks.

On Wednesday night, the School Committee had its regular meeting which was preceded by a Joint Facilities Subcommittee Meeting (joint as in the subcommittee consists of both councilors and school committee members). Thanks to Amy Bisson, we have comprehensive reports on both meetings.

At the Joint Facilities meeting, two items were discussed. The first was overcrowding in middle schools. Subcommittee members feel that keeping class sizes down should be a priority, but they also see that short term solutions such as portable classrooms and rented facilities would be very expensive and only short term solutions. Councilor Samaras wants the school department to explore extending the day, while others looked to the current freshmen academy as a possible solution, assuming the freshmen move into the new high school after it is built. But the space is needed this coming September, not five years from now which is when the new high school is expected to be ready. 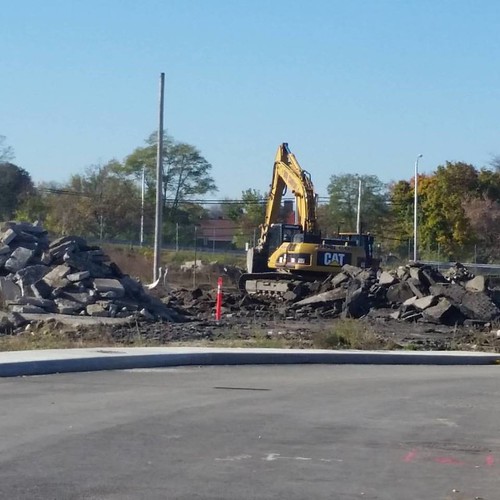 Every week or two, I walk down to Jackson Street to see what’s going on in the Hamilton Canal District. This week I was pleased to find a big yellow excavator sitting next to a pile of dirt and rock in the middle of the Justice Center site. Access to that site has suddenly becoming more limited: workers were just then erecting a six foot high chain link fence around its perimeter.

There were 28 properties in Lowell sold last week, most on Monday which was the last day of October, always the busiest real estate day of the month. The top price was $400,000 for 35 Tanner Street followed by $370,000 for 123 Shaw Street. All of the week’s sales are shown on the Lowell Deeds blog. 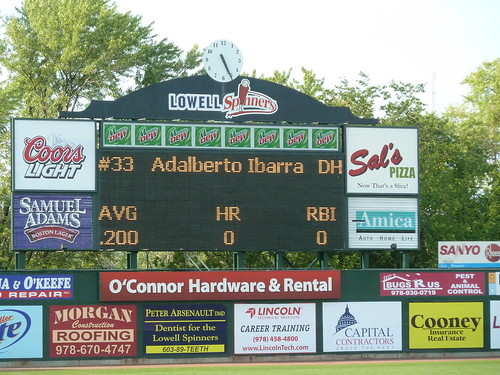 Here’s a legal notice that was published on Wednesday (November 2, 2016):

City of Lowell Lease of Edward A. LeLacheur Park

The City of Lowell, through the Lowell Arena and Civic Stadium Commission (“Commission”), constructed a ballpark in Lowell, known as the Edward A. LeLacheur Park (“LeLacheur Park”). The facility has a 5,030 seat capacity for baseball games, and additional seating capacity for other events, such as concerts. The Commission seeks a professional baseball team, and its experienced professional management team, to lease and operate the facilities at LeLacheur Park, to maximize benefits to the community and revenues to offset operating expenses. This is a ten (10) year lease. Sealed proposals will be received at the Office of the City of Lowell Purchasing Agent, City Hall, Room 60, 375 Merrimack St, Lowell, MA 01852 until 11:00 a.m. on December 2, 2016. Information regarding this project may be obtained by contacting P. Michael Vaughn, Chief Procurement Officer/Purchasing Agent, City of Lowell.

Hopefully, the Lowell Spinners will submit a bid and after diligent negotiations by both sides, a new lease will be executed and the Spinners will continue playing in Lowell for years to come.

Next Saturday there will be a silent auction from 1 pm to 4 pm at the Franco American School, 357 Pawtucket St in Lowell. The school has closed and all items will be sold. Many antique furniture and furnishings will be available. To see photos and for more information, check out the Silent Auction Facebook page – https://www.facebook.com/groups/2205084740/ 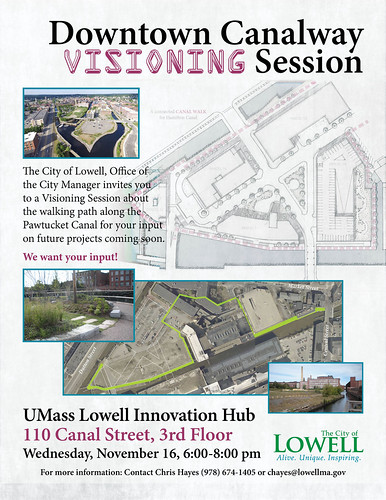 This month the City is hosting a public visioning session to solicit input on designs for the lower Pawtucket Canalway located in the Hamilton Canal District.  The meeting is scheduled for 11/16 at 6:00 pm at the UML Innovation Hub at 110 Canal Street. The purpose of this event is to build on the momentum created by the Lowell Heritage Partnership with the Waterways Vitality Initiative and to generate public input.  Everyone is welcome, especially members of the public. City Councilors and representatives of NPS, DCR, Hamilton Canal District developers, abutting business owners and residents are all expected to attend.