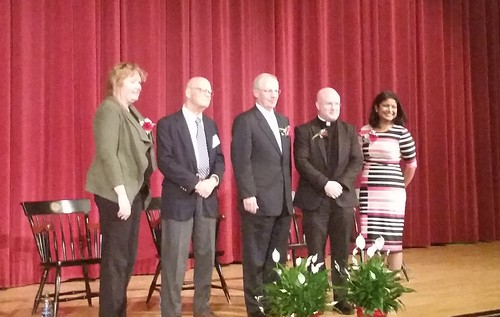 Yesterday was the 13th annual Lowell High School Distinguished Alumni Award Reception at the school’s Cyrus Irish Auditorium. The hundreds of family members, friends, public officials, and students who filled the hall for the ceremony were entertained by the Lowell High Band while Air Force Junior ROTC cadets served as ushers, presented the colors, and formed an honor guard with crossed swords for the introduction of the honorees who were:

Perkins took college prep courses at Lowell High but upon graduation went to work for a Boston firm that represented the interests of Lowell textile mills around the world. The firm sent Perkins to Argentina for three years and Chile for two. He returned to Lowell in time to enlist in the Union Army during the American Civil War. As part of General Ben Butler’s New Orleans command, Perkins gained fame and respect as the commander of a cavalry troop while also using the language skills he acquired overseas to serve as Butler’s official translator. On June 3, 1863, during a lengthy engagement with the enemy, Perkins was shot in the stomach and died a few hours later from the wound. Solon Perkins is buried in Lowell Cemetery.

Accepting the award for Solon Perkins was Eileen Loucraft, the local historian who nominated Perkins for the award. Eileen explained that after the war, the men in Perkins’ command brought the American flag they had carried throughout the war back to Lowell and presented it to Perkins’ mother as a memento of her son. Late in her life, she gave the flag to a relative who encased it in a custom-built wooden frame that was inscribed with Perkins’ name and a list of battles in which the unit fought. Eventually, that framed flag was hung in the Lowell Memorial Auditorium, but at some point during renovations, it was removed, stored in the basement, and forgotten. In January 2014, a maintenance worker re-discovered the flag. The Greater Lowell Veterans Council financed its restoration, and the flag now hangs once again in the Auditorium.

James grew up in Connecticut, but when his father died, his widowed mother sent him to live with relatives in Lowell as a young teenager. James found a job in a local drug store and became fascinated by medicine which, in an age before pharmaceutical companies, was custom-mixed at the drug store. This interest led James to attend University of Pennsylvania Medical School, and while he never practiced as a doctor, this education informed his work in the pharmaceutical field. Branching out on his own, the J. C. Ayer Company, at its peak, was the second largest employer in Lowell after the mills. Ayer’s products were known and used throughout the world. Ayer died in 1878 and is buried in Lowell Cemetery.

Accepting the award for James Cook Ayer was James Ayer, the great grandson of James’ brother and business partner, Frederick Ayer. James explained that his view of his ancestors’ medicinal products has evolved. He used to see them as just “feel good” products that provided psychological rather than physical benefits to their consumers. He has come to realize, however, that most of Ayer’s medicines were on the cutting edge of the medical field, such as it was at the time. And while the medicines might not have cured the diseases, they did ease their symptoms, thereby providing considerable comfort to the afflicted. James identified two factors that drove the company’s success: the ability of the medicines to ameliorate the symptoms of diseases; and the effectiveness of the company’s advertising, particularly the Ayer’s Almanac which was published annually from 1854 to 1900, at times in 14 different languages.

Phil holds the distinction of being the only person to hold the offices of Lowell City Councilor, State Representative, and State Senator. He grew up in the Lowell Housing Authority’s North Common Village housing project, assisting his widowed mother by shining shoes and caddying at Vesper Country Club.  His main sport was boxing, however, and he became a champion in both the Silver Mittens and Golden Gloves. After high school, he studied and worked in accounting. He was elected to the city council in 1969 and served in elected office until 1984 when he ran unsuccessfully for United States Congress. Afterwards, he was the Chief Financial Officer and Deputy Secretary of the Commonwealth under William Galvin. Shea continues to be active in public affairs and has served as a mentor to a number of public servants including UMass President Marty Meehan, Lowell City Manager Kevin Murphy, and Lowell City Councilor Rodney Elliott.

In his remarks, Phil shared how impressed he was during a recent visit to Lowell High by the accomplishments of today’s students and teachers. He then spoke powerfully and emotionally to the students present, telling them

No matter where you come from, you will always face difficulties. When someone tells you that you can’t do something, prove them wrong. Take it from someone who knows. Many times I was told I couldn’t do something, but because of the inspiration of my teachers at Lowell High, I kept moving forward. Just work harder to prove them wrong. The most important thing for your future is a good education. Don’t ever give up on chasing your dream. I shined shoes for 10 cents and caddied all day for $1. Along the way I learned that education is the key to the door of economic success.

Roger Landry was the valedictorian of his class, a Carney Medalist, and the three-time captain of the LHS tennis team. Roger went to Harvard College and then became a Roman Catholic priest, studying theology at schools and seminaries across Europe and North America. He has served as a parish priest in Fall River, Hyannis, and New Bedford, and was the executive editor of The Anchor, the weekly newspaper of the Fall River Diocese. Since 2015, Fr. Landry has served as the attache of the Catholic Church’s Permanent Observer Mission to the United Nations.

Fr. Landry began his remarks by saying he has always felt like a distinguished graduate because Lowell High is such a distinguished place. He took advantage of the “educational buffet offered hungry students” at LHS. He has lived all over the world. Thousands of times he has been asked “where are you from?” He always replies, “Lowell, Massachusetts” because of the great pride he has in this city. He has also been pleased to discover how well-known Lowell is around the world because of the textile mills, Jack Kerouac, Mickey Ward, and others. Fr. Landry said that Lowell High is a place where dreams happened because people at Lowell High helped make them happen. He said the teachers at LHS “taught me to think, but also taught me to excel.” He also said that while religion was not a formal subject at Lowell High, the example set by so many teachers and administrators of compassion and service to the poor in their volunteer work outside of the school, provided great inspiration and preparation for him in his priestly vocation.

After graduating from Lowell High, Heena studied Anthropology at Harvard and medicine at University of Massachusetts Medical School. She completed her general surgery training at the University of Chicago while also obtaining a Masters in Health Studies. She next completed advanced surgical fellowships in trauma at Cook County Hospital in Chicago and in Emergency Surgery and Critical Care at Mass General Hospital. Besides serving as an Associate Professor of Surgery at UMass Medical School, Dr. Santry works as a trauma surgeon in Worcester, providing round the clock care for those with surgical emergencies and life threatening conditions.

In her remarks, Dr. Santry (Heena Patel while at LHS), stressed that the “respect for diversity and the cultural humility” that she learned at Lowell High informs every aspect of her work as a trauma surgeon. She explained that like most professionals, she has hanging on the wall of her office the degrees and awards she has received in her professional life. At the center of that wall is her Lowell High School diploma, because the education and experience she received at Lowell High forms the root system of all the other branches of her life. She said “books came easy for me” but the many opportunities offered by Lowell High allowed her to branch out and try different things like playing clarinet in the band or serving as treasurer of the chess club.

Dr. Santry also revealed that as the most recent graduate on the stage, she at first wondered whether she would fit in with the others. As she heard their introductions and remarks she realized she had a connection with each of her fellow honorees. She explained:

Like Phil Shea, I grew up in public housing in Lowell

And if Solon Perkins was shot in the belly today, I could save his life.

With that, another excellent, enlightening, and inspiring Lowell High Distinguished Alumni program came to a close.