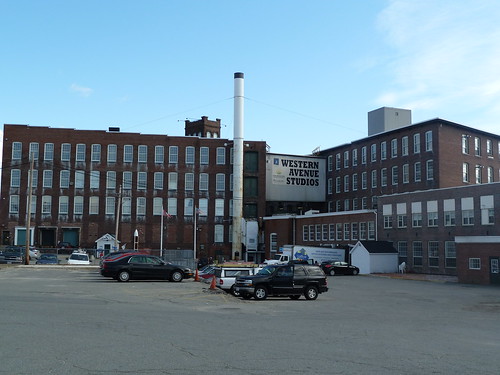 Western Avenue Studios is a small business incubator for Lowell and is said to be the biggest collection of artists in one location east of the Mississippi River. Located in the former Massachusetts Mohair Plush mill building alongside the Pawtucket Canal, Western Avenue Studios is just a short walk from the Hamilton Canal District and the rest of downtown Lowell – except it isn’t, because that end of Western Ave is blocked to both vehicular and pedestrian traffic. 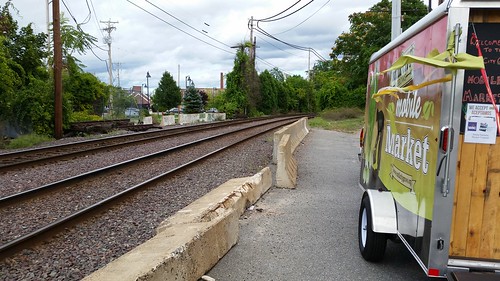 The end of Western Ave with Dunkin Donuts and Mill No. 5 visible beyond railroad tracks 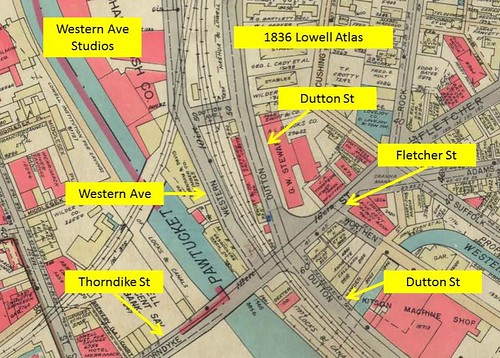 In the early 1900s, Western Avenue connected School Street to Thorndike Street, as shown in the image from the 1936 Lowell Atlas shown above. Back then, Fletcher and Thorndike Streets ran in a straight line, connecting at their intersection with Dutton Street, which ran along the Merrimack Canal from French Street, through Fletcher/Thorndike, and on to Willie Street in the Acre. Western Ave ran parallel to Dutton Street and intersected Thorndike a short distance to the south of Dutton, about where the drive through lane for the Dunkin Donuts is now located. At some point (I don’t yet know when or why) Western Ave was blocked at its Thorndike Street end.

Western Ave remained blocked until 1985. That year, a devastating fire destroyed the School Street bridge over the Pawtucket Canal in the vicinity of the gas company (it was a large gas line that ran under the bridge that ruptured and made the fire so intense). To help alleviate the traffic disruption caused by the closure of School Street, the Lowell City Council on November 19, 1985, petitioned the Middlesex County Commissioners for permission to establish “a highway-rail grade crossing” at Western Avenue. The purpose of this crossing was “to provide a temporary detour route for vehicular traffic during the reconstruction of the School Street bridge which was partially destroyed by fire.” After a public hearing on this petition, the Department of Public Utilities ruled that the request was reasonable and recommended the County Commissioners grant the request with the conditions that permission for the crossing would end in five years or upon completion of the re-opening of the School Street bridge and on the further condition that the city pay for an automatic protection system of gates, bells, and flashing lights at the crossing for as long as it was allowed. 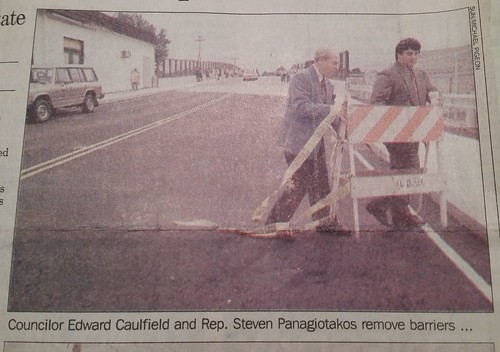 The new School Street bridge took ten years to complete, reopening on July 17, 1995, but not everyone wanted Western Avenue to be again closed at Thorndike Street. Since the fire, Ed Souza, an employee of the city’s Department of Planning and Development, had built Mill City Car Wash at the end of Western Avenue on the site now occupied by the Dunkin Donuts. Sousa argued to a city council subcommittee that closing that end of Western Ave would hurt his business. Supporting Sousa’s request were City Councilor Tarsy Poulios and then-State Representative Steve Panagiotakos.

Opposing the request to keep Western Avenue open was Elkin McCallum, president of Joan Fabrics, which had a manufacturing plant on Western Ave (presumably in the building now occupied by Western Avenue Studios). The Lowell Sun political column on June 4, 1995, “Storm Brews over planned closure of Western Ave,” quoted a letter to the city from McCallum as saying “Opening Western Avenue at both ends would seriously impact [his company’s] expansion plans” on Western Avenue.” The column speculated that since McCallum had just moved his corporate headquarters from Lowell to Tyngsboro, so City Manager Richard Johnson would not want to be seen as disregarding McCallum’s concerns about his Western Avenue facility. The article stated the many large trucks that serviced McCallum’s facility would have an easier time maneuvering if Western Ave was again a dead-end street. (An additional consideration for city leaders may have been Mr. McCallum’s status as one of the three co-owners of the American Hockey League franchise that was coming to the city the following year to play in the as yet unfinished Tsongas Arena).

Western Avenue was re-closed at Thorndike Street shortly thereafter and it has stayed closed ever since. The community can probably live with it remaining closed to vehicular traffic. But it is essential to the continued and future economic vitality of Western Avenue Studios and to the Hamilton Canal District and, by extension, the rest of downtown, that it be reopened legally and safely to pedestrians, and not with some hyper-expensive bridge that no one will want to use, but with an at-grade pedestrian crossing with lights, bells, and gates. Lowell city government was able to reopen the road back in 1985 when circumstances demanded it. We should be able to do it again. 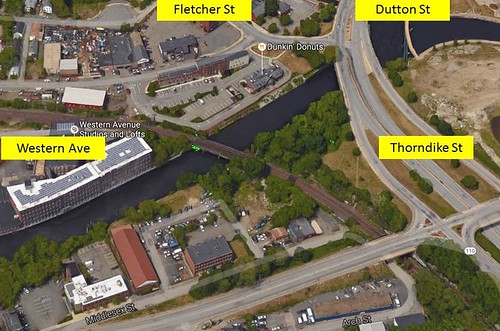 6 Responses to Western Ave and Thorndike Street: Some History