Another essay by Bob Hodge, a 1973 graduate of Lowell High School, a 1990 graduate of University of Lowell, and one of the greatest runners to come from Lowell – ever. Bob’s previous essay, Running Down a Dream: Cohasset by the Sea Road Race, April 1978, was published on October 20, 2016. In this story, Bob takes us back to Lowell High School in the 1970s.

“Books have a unique way of stopping time in a particular moment and saying: Let’s not forget this.” ― Dave Eggers

The first race, a cross country race, opened up my imagination and sent me into and out of a dream continuously.

“Hey Hodgie, what the hell were you doing in Trull’s class” asked Emo my friend from the neighborhood. “What do you mean” said I. “Man, it was like you were a manikin or some twilight zone character when Trull called on you and had to come over and wind up his pointer and whack your desk to get your attention”  Emo was nonplussed with my behavior lately.

“I was thinking about Thoreau, and a quote that he uses in Walden.”

“I am Monarch of all I survey, my right there none to dispute.” “Emo, I love this idea you dig?”

“Hodgie quit that hippie talk and snap out of it, you worry me boy.”  Emo meant well but I did not think like most other people and I accepted that.

I had another friend ask me once “Hodgie, how do you manage to stay above it all?” Well, “it all” seemed like terminal silliness to me, just low brow. Of course, this kind of thought process didn’t matter much in the “hood,” so mainly I kept it to myself.

I realized early on that possessions were not important to me, only experiences. There was that Letter Jacket though so proud when I got it with the grey leather sleeves and red cotton with a grey letter L. The first night that I wore it out with my friends I got drunk sitting around in some field drinking quarts of Schlitz  and then when it got late I started running home and threw up on the jacket which I then deposited in a garbage can.

It was just a stupid jacket.

I also had a thing about my hair and I never combed it or washed it often enough and it was a massive mess of curls. I had some weird phobia about the barber who I thought had insulted me once and so I started cutting my own hair and continued to do so for many years. The results might be awesome or atrocious according to my whim. 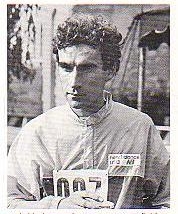 “a massive mess of curls”

Many years later I won a marathon race in Japan and my photo from the after race wearing a laurel wreath on my head and my wild hair blowing out all over, was in the papers back home. I spoke with my brother when I returned and he said “ya Bob, me and Dad saw your picture in the papers and Dad figured you must still be cutting your own hair, haha.”

I wore flannel shirts (or I should say “shirt”), cords and construction boots usually with white sox. This mode of dress for Public High School students was not unusual in the 1970’s.

I was in love with Judy who sat in front of me in English class. She was aware of my running exploits and asked me about it in class. She wanted to come out for the new fledgling girls track team.

One day I walked into class and she was not there and had not been there for a week. “Hey Wally” I asked my friend “where is Judy?” “You didn’t notice?” said he. “Notice what? “She’s pregnant peckerhead, everyone says it’s someone on the football team.”

Women and girls are nothing but heartache.

A thousand kids in my high school and I am probably the only one who didn’t know. I lived a lot in my own little world. Running and reading were my passions in that order.

School daze, when would they end and what I would do I knew not. I still had senior year and it was looking pretty easy especially where I had not made any college plans and few colleges showed an interest in me even though I was among the best runners in the state.

I took drivers education with Ray Riddick, a legendary football player and now coach of our high school football team. I would meet coach and the other students one morning a week behind the school where the cars with the big “Student Driver” signs attached were parked.

We drove a Plymouth Satellite (like the woman from Planet Claire for you B52’s fans) a 1972 model, a monster of a car. It still had that new smell and just a few hundred miles on it. Ray, Mr. Riddick, or coach – I was never sure how to address him – beckoned me to get behind the wheel and he slid across the front seat and sat right up against me. The man was enormous, my hands got all sweaty.

“OK Bobby” and he started in to quizzing me on what everything on the dashboard and steering column that was pretty basic in those days. He continued to sit next to me and he put his left arm over the seat back so his enormous hand sat right behind my head.

“OK Bobby put it in reverse and eases it back.” As I started to go in reverse he said “have you ever driven before?” As I was about to answer I lightly touched the brand spankin new power brakes and Ray’s head, not far from the ceiling of the car anyway, bumped it, bam.

His enormous hand then wacked me a couple of times in the back of the head, “Bobby, easy on the brakes.” I then nervously explained that my brother’s Oldsmobile did not have power brakes, hence my heavy footedness.

There were usually three students in the car together and we would each take a turn at the wheel. Ray was usually pretty patient but the man’s shear size and demeanor was intimidating. One young woman braked hard to avoid hitting a squirrel and Ray bammed his head again on the ceiling of the car and had her pull over while he lectured her on the relative worth of a squirrel. “It’s us or them, missy.”

My favorite ride was to the Quality Donut shop in the Acre section of the city, right across the street from where I used to live, featuring “Lowell’s best coffee” and I think it was too.

There we would all go again and sit and drink coffee for a bit while Ray talked with the locals about the upcoming football season and his former glory days as a player with the Packers.

After a few weeks of Drivers Ed. Training Ray signed off on my certificate and said I was good to go. That gave me a free period and I usually would go have breakfast at a little coffee shop if I had any money or I would go to Prince’s Bookstore or the Public Library.

My senior year I felt more comfortable in my skin. Running was going well grades were OK (B’s & C’s are good enough folks) . I had been offered a scholarship quite unexpectedly, to Johnson & Wales Junior College in Providence RI. That was something to ponder.

One Response to School Daze Lost in Time