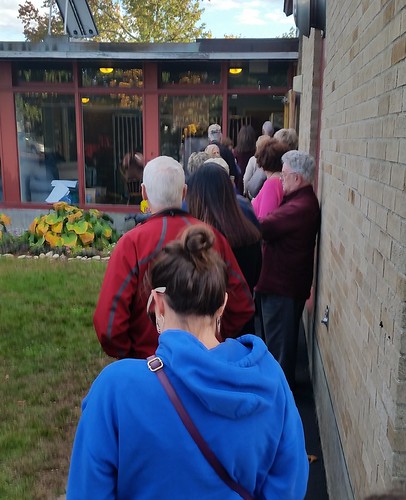 Early voting began for the first time in the Commonwealth of Massachusetts today. I joined a line of people at Temple Emanuel on West Forrest Street late this afternoon to take advantage of this new opportunity. 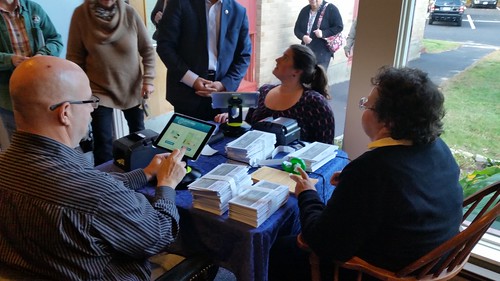 Here’s how it worked: Just inside the door was a table staffed by Eta Matchak, the Director of the Lowell Election Office and two poll workers. They had two touchscreen pads connected to the city’s voter database. Instead of starting with your street address, this system requires your name, last then first. The poll worker types it in and retrieves the record. If there is more than one voter with the same name, you are asked where you live to confirm which one is you. Once that’s done, the poll worker highlights your record and asks you to touch an onscreen button that says “accept” or something like that.

Massachusetts law does not require a registered voter to show an ID (Ed. Note – That’s fine with me) so you don’t have to show one to vote early. Two exceptions to that are if this is the first time you are voting after registering to vote online, or if you are listed as an Inactive Voter for failure to have returned the city census last winter. (I saw a couple of people in this latter category and the procedure for allowing them to vote went smoothly).

Once you’ve touched the electronic pad which certifies that you are the person highlighted on the voting list, attached label printer spits out a two inch square label containing your name, ward and precinct, and some other information. The poll worker affixes that to the front of an envelope which is then handed to you along with your ballot.

The ballot comes in two separate sheets, each folded in thirds. The first page of the first sheet contains all of the offices and candidates which are President, Representative in Congress, Governor’s Councilor, State Senator, State Representative, and Sheriff. You vote by coloring in the small circle next to the name of the candidate you select.

Then you move on to the ballot questions. Question One (additional slot parlor), is in a vertical column on the right side of the first page. Questions Two (charter schools) and Three (farm animals) are on the back of the first page. Question Four (marijuana) is on the second ballot sheet. As is always the case with ballot questions, there is a LOT of text involved. It really helps to have thought the questions through in advance and memorized the answer (Yes or No) you plan to give to each.

Logistically, there were about ten aluminum voting booths set up around the room. Each faced a wall and had side partitions which ensured privacy. Using the felt tip pen lying on the booth’s shelf, you color in all of the circles as described above.

After filling in the circles, you fold both ballot sheets and place them inside the envelope. You seal the envelope closed and then sign it, just as you would with an absentee ballot. Another poll worker takes your ballot envelope and gives you an “I Voted” sticker. That’s all it takes.

These sealed ballot envelopes will be returned to City Hall tonight and locked in the Election Office safe. On election day, they will be placed in the ballot boxes of the corresponding precinct and will be counted along with absentee ballots.

I heard that 200 people voted at City Hall today. When I arrived at Temple Emanuel at 4:45 pm, there were more than a dozen people in line and others arrived continuously while I was there. Many were familiar faces from that neighborhood’s Ward 8, although you can vote at any early voting site regardless of your ward and precinct.

Since my first presidential election vote in 1980, I’ve enjoyed the ritual of going to the polling place on Election Day and casting my ballot for president of the United States. Departing from that long-held ritual was tough, but I wanted to see as soon as possible how early voting works.

In Lowell, it is working well. From a candidate/political activist perspective, it will change the way campaigns close out a race. From a voter turnout perspective, anything that makes it easier to vote – which this does – should increase participation which is a good thing.

Here are the remaining Early Voting venues and times. All of the following early voting events will go from 4 p.m. until 8 p.m. on the date and place indicated:

In addition to the above, other early voting opportunities will be held on:

Finally, early voting will be available each weekday from October 24 to November 4 at Lowell City Hall during the following hours:

2 Responses to Early Voting: A Good Start in Lowell