Early voting for the November 8, 2016 presidential election starts tomorrow. This is the first year that early voting has been allowed in Massachusetts unless you fit the narrow requirements to vote by absentee ballot. The early voting period extends from tomorrow (October 24) to the Friday before the election (November 4). Throughout these two weeks, you may vote at the election office at City Hall, but each evening and on next weekend, there are places around the city where you may vote, regardless of your precinct. Today’s Globe has a Question and Answer article about early voting that’s worth reading.

Amy Bisson watched last Wednesday’s Lowell School Committee so you didn’t have to. She posted a full report on her website.

A legal notice was published this week by the state’s Division of Capital Asset Management & Maintenance requesting statements of qualifications from contractors for:

From the responses to this request, which are due on Wednesday, November 9, 2016, the state will create a list of prequalified contractors who may then bid on various aspects of the work. This legal ad is a good indicator that the project is moving forward. 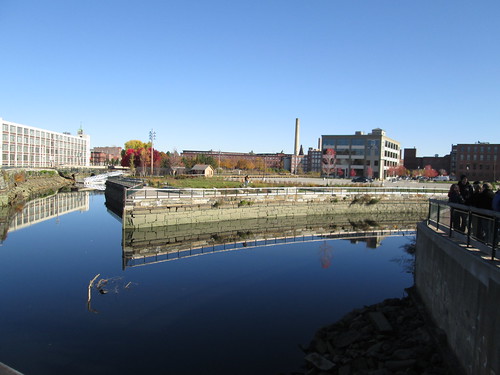 Someone asked me this week what I thought of Winn Development’s proposal to include some housing in the Hamilton Canal District. Ken Wallace may have been asked the same question, because his Saturday Chat yesterday led with this: “Some councilors appear to be close to a decision to reject the WinnCompanies proposal to build a multimillion-dollar 135-unit apartment complex in the Hamilton Canal District.”

Back at the September 27, 2016 council meeting, Winn Development gave a presentation on its plans for the Hamilton Canal District. Winn representatives talked about market rate housing but also spoke of a “funding gap” created between the high costs of construction of a new, ground-up building and the amount of rent that could be expected from tenants in Lowell.

At that time, several councilors expressed concern that the housing might not all be “market rate.” Here are the notes I recorded during that meeting:

Council Comments – Councilor Belanger begins. Asks why there’s a 6 to 10 year timeline for bringing in companies. Winn says they’ll be soliciting companies immediately and if they find one, they’ll speed up that timetable. Reiterates the enormity of an entirely new, ground-up building. He refers to Boston’s efforts in bringing GE to Boston and says that’s the kind of collaboration they anticipate here. Winn reminds them that with no building to renovate, there’s no availability of historic tax credits. As for low income tax credits, he says a new state program provides 80% market/20% low income which is still for people making $40,000 per year so it’s more accurately called “work force housing” than low income housing. Belanger asks if considering condominiums. Winn says they are open minded; they’ll look to the feasibility study.

A succession of councilors say they want market rate housing filled with people with disposable income.

Councilor Mercier asks about the “funding gap.” Winn says even with $2000 per month rent for market rate housing, you still need subsidies to be able to construct the property. Winn also cautions city councilors to refrain from saying “we don’t want any housing” because in the competitive environment for subsidies. Councilor Mercier asks why could Perkins get $6mil in historic credits and this project can’t get any. Winn explains that Perkins was renovating a historic building; this project is building brand new buildings which don’t qualify for historic credits.

Councilor Milinazzo says this is a reality check for the city council. We have one of the best developers in the country telling us there’s a funding gap that can be bridged by 80/20 mix of market rate/work force housing. If we don’t get real and recognize this is the only way this is going to be built, we aren’t going to be having any ribbon cuttings. Councilors can’t be afraid of the term “work force housing.”

Steven Panagiotakos speaks next. He says “work force housing is the people we represent.” He says it’s young people just starting out. We should want that; we shouldn’t be afraid of that. We want those people to stay here. Councilor Leahy thanks Panagiotakos “for the great explanation; that’s what we needed to hear.”

Just last week at the annual meeting of the Northern Middlesex Council of Governments, State Senator Eileen Donoghue, in her remarks about the state’s economy, mentioned this “workforce housing” program. Here’s what I wrote about that:

The final topic was housing. Donoghue said there is not enough of it for the workers we need for the jobs of tomorrow. This bill helps rehabilitate existing properties and build new ones. It contains incentives for the construction of market rate housing, but also $25 million to supplement the creation of “work force housing” which is intended to house people who work fulltime but are not paid a sufficiently high wage to afford market rate housing. Donoghue called this work force housing component “a game changer for Gateway Cities.”

There is a Master Plan for the Hamilton Canal District. It is 114 pages long and is available on the city’s website. One of the “project goals” in the Master Plan is to “develop a residential component that appeals to consumers seeking an urban experience with access to Downtown Lowell, rail access to Boston or highway access to the Route 3 and Interstate 495 corridors.”

The creation of this plan was not a top-down process. Instead, it was driven by working groups of residents and other stake holders. One of the working groups concerned itself with gentrification. Here’s what the Master Plan says about that group:

“The Gentrification Working Group discussed the need to keep affordable housing, including artist housing, in the Hamilton Canal District and the desire to make housing available to local residents. To address the concerns of this group, the HCD will be designed with an affordable residential component.”

My opinion is that the Work Force Housing plan sounds pretty good. Remember, Winn is proposing a building with 80% market rate units and 20% “work force housing” which is for families earning up to $40,000 per year. Having a mix of housing and commercial structures in that district is essential, because otherwise it will become an afterhours and weekend ghost town that is more like a suburban office park than a vibrant urban neighborhood. And while it’s not wise to rush into anything, the Hamilton Canal District was been around for ten years without much to show for it. Renaming it the Hamilton Canal Innovation District, as the council proposed doing last Tuesday, will not make Google and Amazon suddenly construct new buildings in the area. At some point, you have to go with what you’ve got and then do everything you can to make that work. I think we have reached that point.

Speaking of housing, there were 23 sales of real estate in Lowell this week and five foreclosures. The highest of the sales prices was $1,975,000 for a couple of multifamily residences at 452 thru 462 Fletcher Street, across from the North Common. The buyer was a Boston-based limited liability company and not UMass Lowell, which will come as a relief to some city councilors. Details for all of these sales are on the Lowell Deeds blog.

The council received a memo this week from the Division of Development Services with several recommended changes to the city’s zoning ordinance. The proposal will most likely be referred to the council’s zoning subcommittee, but here are some of the highlights, the first of which seems to be directed at UMass Lowell, although it would apply to nonprofits too:

Large-Scale Residential Projects – Projects consisting of 50 or more beds to be approved would require owner to execute a deed restriction for the benefit of the city stating that the property shall not be transferred to a non-tax paying entity unless that entity agrees to pay real estate taxes.

Then there are other, less dramatic, but probably no less important proposals:

Accessory Dwelling Unit: This would allow a separate living unit to be created within an owner-occupied, one-family structure for use by a close relative. The new unit would have to fit entirely within the existing dwelling and would require building and occupancy permits. The occupancy permit would be good for three years after which the place would have to be re-inspected for continued use. One additional parking space would be required.

Adult Day Care Facility – These are relatively new and will increase in number with an aging population. They have been a challenge to regulate. Parking would be one spot per 600 square feet of the facility.

Micro-Business – Small start-up businesses such as nano-breweries and commercial kitchens. Existing zoning has made it difficult to find space for these small establishments. A business normally classified as a retail establishment if it occupies less than 2000 square feet, could be classified as a micro-business. No parking would be required.

Crafts Business – This is light manufacturing, including food and beverages, that make product and sell it in the same place. They are best suited for business districts with a large amount of pedestrian traffic.

Tourist Home – A response to AirBNB short-term rentals. This would be an owner-occupied structure that rented rooms for sleeping and perhaps meals for not more than 28 days.

Carports – Not currently regulated. Would be treated like garages.

Ground-Mounted Solar – A developer recently inquired about building a “solar farm” on a 1.5 acre parcel in a residential neighborhood. This would establish setback requirements for such a use.

The council will also receive a memo from the city’s Planning Department in response to a motion by Councilor Rita Mercier on the amount of time pedestrian lights allocate for getting across intersections. The memo identifies several positive changes that are coming:

Dutton-Merrimack-Arcand Drive (in front of City Hall): the waiting time for the pedestrian crossing light will drop from two minutes to one minute, twenty seconds.

Market-Central: This will switch to “an exclusive pedestrian phase” which means all traffic wills top when pedestrians have permission to cross.

Central-Merrimack: There will be a No Right Turn sign on Central Street so people crossing Merrimack won’t have to compete with cars making right on red turns.

French-Bridge (adjacent to Kerouac Commemorative): There is an RFP out for consulting services to redesign the pedestrian walks across that intersection.

Thorndike St at Gallagher Terminal, Highland Street, and YMCA Drive are being redesigned as part of the Thorndike Street Improvement Project. Pedestrian signal upgrades will be included at those three intersections.

These will all be helpful for pedestrians, but we still have a long way to go to make Lowell a walking-friendly city.