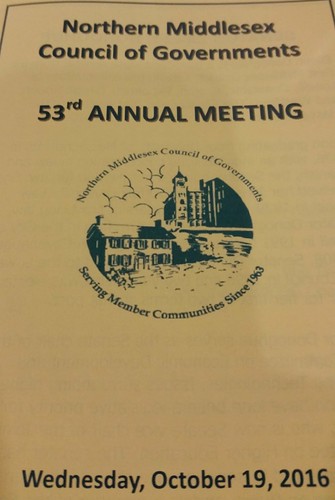 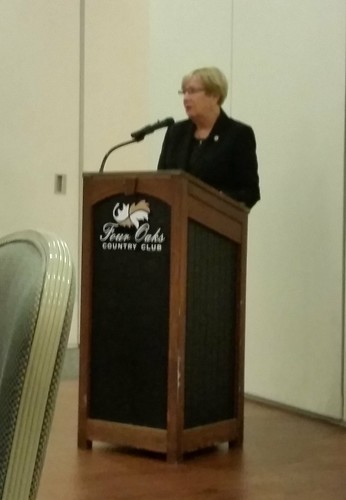 Donoghue began by saying the replacement of the Rourke Bridge “is a priority for the Lowell legislative delegation.” It is not just a matter of convenience, but also of safety and economic development.

Senator Donoghue then shifted to the outlook for the current fiscal year which is three months old. There is a deficit predicted and the governor is planning millions in emergency budget cuts, although these should not diminish local aid or the state’s response to the opioid crisis. The revenue picture is perplexing because job growth is up and unemployment is down, but sales tax receipts are also down and no one can pinpoint the exact reason why.

Donoghue then praised NMCOG as “a natural partner to legislators” that also provides immeasurable assistance to its member communities. It gives the communities planning help that allows much needed projects become a reality. Donoghue singled out NMCOG Executive Director Beverly Woods for special praise.

The next topic was the $1 billion state economic development bill. Donoghue explained that the bill contained 153 sections so she only shared some highlights. Above all, the bill promotes innovation, but part of that is job growth and job training, particularly in Gateway Cities like Lowell.

The biggest chunk of money, $500 million, is for the very popular Mass Works program which was started under Deval Patrick but greatly expanded by Governor Baker. Mass Works provides funding for infrastructure improvement that will promote economic development [note: Lowell has received Mass Works funding for work in the Hamilton Canal District].

Other funding is available for Brownfields Development and for “transformative development grants” which goes towards such things as Worker Hubs and Maker Spaces.

A portion of the bill that passed the legislature but that was vetoed by the governor would have created community Benefit Districts which would be public-private-nonprofit partnerships for economic development. These CBDs would be highly flexible, much more than traditional Business Improvement Districts, and would be grass roots, neighborhood-based, and would supplement local services. Despite the veto, the legislature continues to work to address the governor’s concerns, so Donoghue hopes this measure will eventually pass in some form.

Workforce development was the next item discussed. The economic development bill devotes $50 million to vocational education systems, which while very good, lack the capacity needed to train the number of new workers needed by our economy. A big task for the state is to align the skills of our residents with the jobs of the feature. Donoghue pointed to a partnership between a rail car manufacturer that recently opened a plant in Springfield and a local vocational high school there.

The final topic was housing. Donoghue said there is not enough of it for the workers we need for the jobs of tomorrow. This bill helps rehabilitate existing properties and build new ones. It contains incentives for the construction of market rate housing, but also $25 million to supplement the creation of “work force housing” which is intended to house people who work fulltime but are not paid a sufficiently high wage to afford market rate housing. Donoghue called this work force housing component “a game changer for Gateway Cities.”

Senator Donoghue closed by saying that the best thing state government can do is form partnerships with local government so that the state provides the tools and incentives needed to let municipalities get things done.

The Northern Middlesex Council of Governments is one of 13 regional planning agencies in the Commonwealth of Massachusetts. Its member communities, and the representatives from each, are as follows: