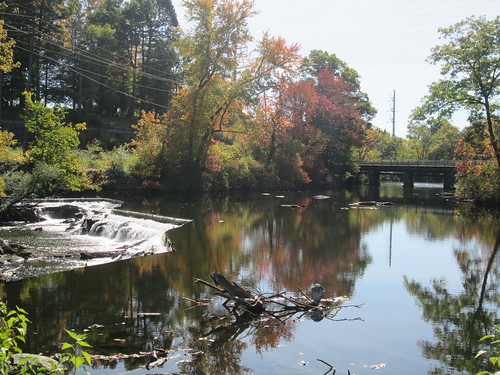 Yesterday’s beautiful weather drew 105 people to the final Lowell Walk of 2016. Jane Calvin of Lowell Parks and Conservation Trust led us along the Lawrence Street portion of the Concord River Greenway and then onto Centennial Island, the home of the West End Gym, a hydroelectric plant, and layer upon layer of Lowell history. 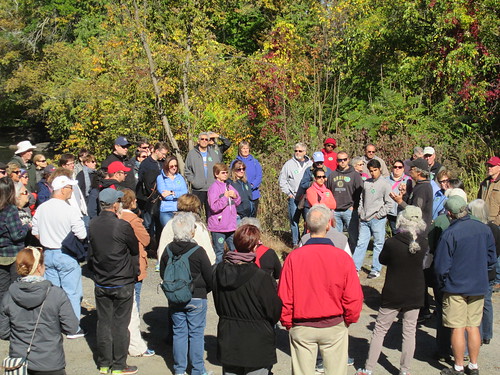 Here’s a list of this year’s tours, showing the date, topic, tour guide, and attendance:

That’s 26 events with a total attendance of 1846. Thanks to all the tour guides who volunteered their time and expertise, and thanks to everyone who came on the tours. You can’t have a great tour without a great audience.

We’re already planning Lowell Walks 2017. If you haven’t already done so, please use the box in the upper right corner of this website to join our email list for updates on Lowell Walks and other history-related events in Lowell. 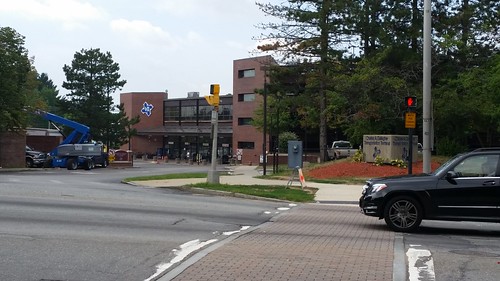 “We have to think of people who are walking” – Rita Mercier

The “walks” in Lowell Walks is both a noun and a verb, because the tours also promote walking. Walking is great exercise. More walking means less driving which could help reduce the traffic problems so many complain about. And the best way to appreciate the good things about Lowell is on foot.

Unfortunately, Lowell is not a city friendly to walkers. True, there have been some sidewalks added and some crossing lights adjusted, but for a half century or more our roads and intersections have been designed with the car as the dominant consideration. The best way to change that mindset is for people to demand equal rights for walkers (and bicyclists) when it comes to future street design. The coming redesign of the Lord Overpass is a big part of this transformational quest: will it be truly be reborn as an intersection friendly to all, or will it just be a prettied-up version of the highway interchange it was designed to be?

This past Tuesday night, the pro-walking lobby gained a powerful voice, temporarily at least, in Councilor Rita Mercier. The week before, Rita walked from her office at the Sheriff’s Department on Summer Street (next to the Eliot Church) to the Gallagher Terminal for a public event. She followed the sidewalk along the South Common to the pedestrian light from the Common to the entrance of the terminal. When the light turned white, signaling it was safe to cross, she set out across Thorndike Street. She barely made it across before the light changed and the traffic rolled. In calling for the length of time the crossing light stays lit to be extended, Rita, who said she moved briskly and almost didn’t make it across safely, was concerned that people with limited mobility would be unable to make it all the way across before the traffic resumed.

Councilor Mercier went on to say, “It probably doesn’t affect us because we usually drive, but we have to think of people who are walking, especially the elderly and disabled.”

The best way to gain an appreciation of what it’s like to walk around this city is to get out of your car and walk. When Councilor Mercier did that, her perspective changed. Others should do the same. 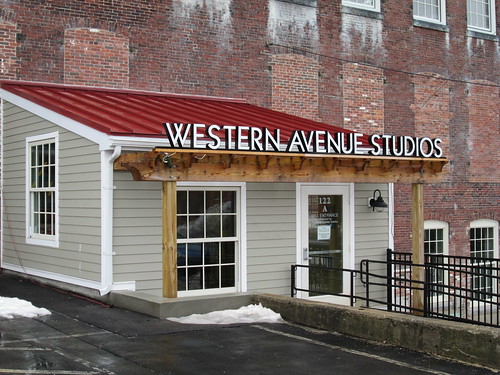 Paul Marion had a great post yesterday in which he revisits Lowell’s missed opportunity in not finding a way to create a reasonable walking route from Western Avenue Studios to Dutton Street and downtown Lowell. Paul writes about a visit to WAS this week with some UMass Lowell students who were fascinated by the place. 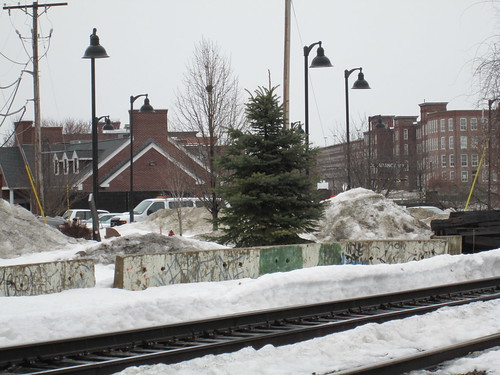 View from end of Western Ave, across train tracks, to rear of Dutton St Dunkin Donuts. Mill No. 5 is to the right.

It’s wonderful that the students had such a positive response, because UMass Lowell’s South Campus is only a couple of blocks west of Western Avenue Studios and they might return with their friends. Downtown Lowell lies to the east of WAS and is much closer, only you can’t get there from here, at least not legally. This is something I’ve written about before: coming from downtown, just cross the train tracks behind the Dutton Street Dunkin Donuts and you’re at Western Ave Studios. But it is neither legal nor safe, to cross those tracks now.

Months ago at the urging of Councilor Bill Samaras, the city investigated what it would take to connect Western Ave to Dutton Street as was once the case. Unfortunately, the city’s response bore a strong resemblance to the efforts of Red Sox hitters when they faced Cleveland Indians pitching last week, which is to say, there wasn’t much success. That’s why I refer to Western Avenue as an island isolated from downtown Lowell. In his post, Paul described the consequences of that, so I’ll repeat his words here:

Transportation planners, traffic engineers, and public officials will have to come together to find a way to bridge the gap between downtown and WAS. The city is missing opportunities every day, whether in the sense of quality of life experience through people’s exposure to this arts hub or simple economic development. Is it overland by the train tracks, on the water via canal like the national park boats, in the air with a distinctive pedestrian bridge? People with more experience in these matters than me are needed. All I am saying is, “Give WAS a (better) chance.”

The council received a report Tuesday night from the City Auditor on the financial cost of charter schools to the city. I wrote about the report last Sunday. It explained that nearly $17 million in state aid to Lowell goes directly to several charter schools which educate more than 1600 students from Lowell.

Councilors were strong in their criticism of the charter school funding formula and were quite direct in their opposition to the Question 2 referendum that will be on the ballot this November. Here’s a sampling of what was said at the council meeting:

Councilor Samaras says whatever benefit charter schools have, if this imbalance continues, it will have a negative impact on our ability to hire teachers and other personnel. Councilor Milinazzo says “to be blunt, the proponents of Question 2 are lying to the people of Massachusetts” about the financial impact of charter schools. Councilor Leary agrees with Councilor Milinazzo, says it is inaccurate to say it will not harm the public schools, it will harm the city budget, as well. Because it comes off the top of state aid to the city, it adversely affects the city more than the school department. Councilor Mercier says she believes in choice, but we have to look out for the best interests of the city. We already have three charter schools in the city. I think that’s enough. She says if Question 2 passes and more charter schools come to Lowell, the financial impact will be more severe. She says people already have a choice and she thinks it’s adequate. Says we should keep the cap on charter schools.

Amy Bisson has a full report on the Lowell School Committee meeting of October 5, 2016 on her blog, An Educator’s Journey. Please read the report, which I regret not mentioning last Sunday.

Democratic incumbent Congresswoman Niki Tsongas and her Republican rival Ann Wofford will debate this coming Wednesday, October 19, 2016, at 1 p.m. at Lowell High School’s Irish Auditorium. The 90-minute debate is sponsored by Lowell High School, Lowell Votes, and the Concord-Carlisle League of Women Voters. It is open to the public. Parking for the debate will be available in the Ayotte Garage which is across the street from LHS. 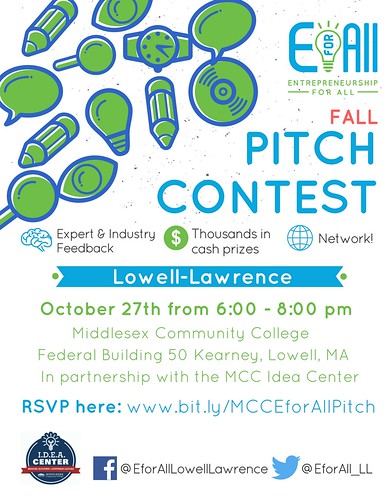 Congratulations to the six entrepreneurs of the 2016 Summer Accelerator Program of EforAll Lowell-Lawrence, who were recently awarded $15,000 in grants. Here is a list of the recipients and a description of their businesses:

(2) Mini-Mole LLC -a robotic floor sweeper to automatically clean all of the hard floors in your home – even under low-clearance furniture.

(4) Take-In – $2,000 A weekly meal delivery service with aspiring/semi-professional chefs working to bring healthier, high-quality, and exclusive dishes to busy people who want to expand their palates starting up in Somerville.

(5) Mi Casita – $2,000 An organization with a mission: to make homeownership accessible to all. They will develop modular homes or “tiny houses” in the Lawrence area and beyond.

(6) The Grown Up Project – The Christina Hamilton Award – $500 – TGP, works on the pursuit of happiness by assisting adults with career change by providing a network of coaches and professional support.

If you want to learn more about EforAll (Entrepreneurship for All), consider stopping by the Fall Pitch Contest which will take place at Middlesex Community College’s Federal Building on October 27, 2016 from 6 pm to 8 pm.

If you’re reading this early Sunday morning, remember to stay away from the Merrimack River today unless you want to be a spectator to a great road race. That’s right, it’s Baystate Marathon day. A year or two ago, there was a post-marathon uproar driven by people who weren’t able to drive that morning – across our river bridges, along Pawtucket Street, and anywhere else related to the Marathon. Opposition to the road race was gathering some momentum until a couple of dozen runners showed up at a council meeting and the revolt fizzled. So runners are welcome in Lowell, as long as they publicize road closures in advance, which they seem to have done pretty well this year.

Yesterday my social media stream was alive with tweets, posts, and comments from the Boston Book Festival which celebrates “the power of words to stimulate, agitate, unite, delight, and inspire,” and which “promotes a culture of reading and ideas and enhances the vibrancy of our city.”

Lowell has a literary heritage. Lowell is supposed to be a city of festivals. Why don’t we have a Lowell Book Festival? Now that Lowell Walks is in the offseason, maybe I’ll explore that possibility in the coming weeks and months. Email me your ideas and suggestions at DickHoweJr@gmail.com.