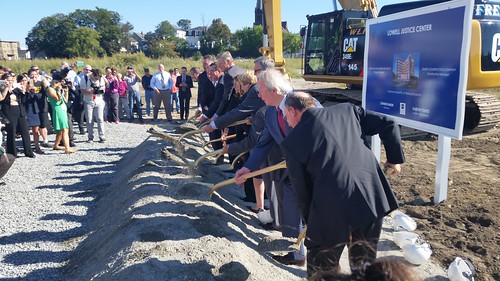 In the aftermath of Thursday’s groundbreaking for the Lowell Justice Center, several people commented to me that they felt the city was moving in the right direction. I agree. There are a number of things going on, big and small, that indicate that overall, Lowell is on the upswing. 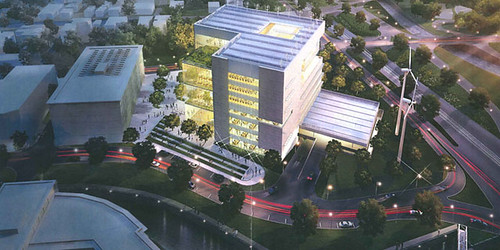 Let’s start with the Justice Center (formerly referred to as Judicial Center). This massive building of seven stories and 267,000 square feet of space will contain 17 courtrooms plus offices for the District Attorney, the Law Library, and the Registry of Deeds. It will greatly expand the judicial presence in the city. Right now, only Superior, District, and Juvenile Courts have regular sessions in Lowell. Housing Court shows up once each week, and Probate Court twice each month. The new courthouse will give a large, daily, permanent presence to both Housing and Probate which will be of great convenience to the people of Lowell. The Judicial Center will also draw hundreds of additional people—court employees, jurors, and litigants—into the city each day. Besides the money they spend during the workday, a good impression of the city will bring them back on nights, weekends, and maybe even as residents.

Earlier this year, one of the leaders of Winn Development, the new Master Developer of the Hamilton Canal District (HCD), spoke before the city council. He said that projects that often seem stalled will suddenly speed ahead once construction of the first big building begins. Hopefully that’s the case with the Hamilton Canal District when courthouse construction begins next week. Perhaps the start of court construction will hasten the start of new HCD office buildings contemplated by Watermark and Genesis Healthcare. And we may find out more about what’s going on in HCD this Tuesday night when Winn Development is scheduled to address the city council.

Besides the construction of these major buildings, infrastructure for HCD is moving forward. The city has received state funding for the “Signature Bridge” which will extend Broadway through the District and across the Hamilton Canal (bringing the utilities across the canal is almost as important as bringing cars across). The 900-car city constructed garage for the District should also be moving forward. One impediment to that garage, where to put the tour buses visiting Lowell National Historical Park, was resolved recently when the city gained ownership of several parcels of MBTA-owned land adjacent to the Gallagher Terminal to use for bus parking

Although people may find it hard to believe (or accept), a second parking garage in the HCD, closer to the Justice Center, seems essential. Garages are expensive to build, especially when financed solely with city funds, but the fact is that the new HCD buildings will be filled with people who drive to work and absent any other solution, they will need someplace to put their cars. 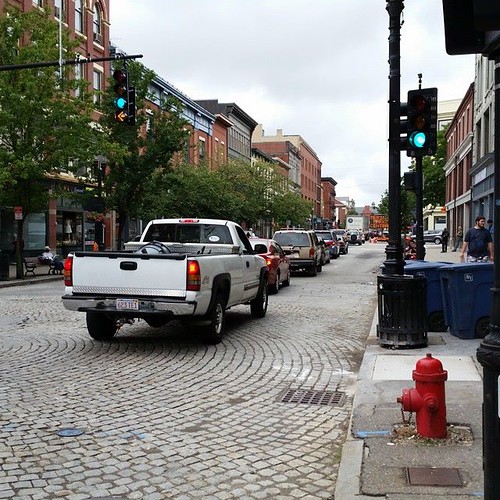 The same people who observed positive momentum in the city, also remarked that traffic was a growing problem. I agree that traffic is a problem, but I reject the notion that widening roads is the solution.  Every time I hear about a road-widening project, I’m reminded of all the talk of how the widening of Route 3 would be the pathway to economic salvation for Greater Lowell. Well it was widened, and now it seems that the only effect is having three lanes of bumper-to-bumper traffic each morning instead of just two. Widening streets just draws more cars to them; it doesn’t improve the flow of traffic.

More streets, narrower and designed in ways that calm traffic, work better. Such streets are more compatible with “mode shifting” which means getting more people to walk, bike, and take public transportation. And mode shifting, is the best long term solution to traffic in Lowell.

Transforming people’s attitudes from what has been accepted to what is possible requires a shared vision of the future, but we don’t have that in Lowell when it comes to mobility. That’s why last week I wrote of the harm caused by ignoring the city’s Sustainable Lowell 2025 master plan. Without a plan that presents a vision for the future, no one can share it, and the conversation is left to the reactionaries who loudly object to change and never offer solutions of their own.

If you are interested in how other cities shift transportation modes, consider coming to the Luna Theater in Mill No. 5 this Monday night at 7 pm for a screening of and discussion about the movie Urbanized, which is a feature-length documentary about innovative design in cities around the world. This free event is part of the Pollard Memorial Library’s Happy City celebration, (and it has the added benefit of providing an excuse for not watching the same evening’s Presidential debate). 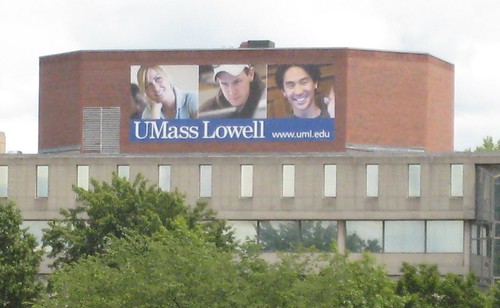 A big part of the positive momentum in the city is due to UMass Lowell. City-University relations experienced some turbulence earlier this year when UMass Lowell’s purchase of the Perkins Loft shifted the communal debate from how much the city benefits from UMass Lowell to how the university is exempt from paying real estate taxes. (As and aside, I’ve met two separate couples who resided in Perkins who have since purchased condominium units in the nearby Renaissance by the River complex, so they are sticking with the city).

Hopefully a smoother path forward for University-City relations will commence this Tuesday night when the council votes on a ‘Strategic Partnership Master Agreement” between the city and UMass Lowell. The agreement addresses a number of things. In a letter to Mayor Kennedy and city councilors, City Manager Murphy highlights several :

The agreement seems fair to me. Hopefully the council will ratify it so that the productive, mutually beneficial relationship between the University and the city may resume. 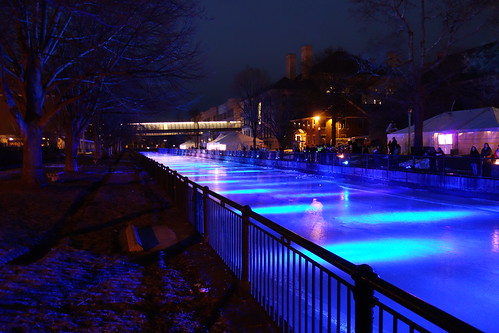 At Thursday’s Justice Center dedication, Mayor Ed Kennedy in his remarks gave great credit to the Waterways Vitality Project which thus far has illuminated the Merrimack Canal along Lucy Larcom Park and the Swamp Locks. The objective is to draw more attention to the city’s waterways which are valuable but underutilized assets. Last month, in her remarks during the National Park Centennial Celebration, Lowell National Historical Park Superintendent Celeste Bernardo said that expanding the Riverwalk and making better use of the walkways adjacent to the city’s canals and rivers was a major objective of Lowell National Historical Park.

The Riverwalk, the Western Canal Walkway, the Northern Canal Walkway, the Merrimack Canal Walkway, and the Concord River Greenway are all great assets for the city. One challenge is to expand the use of these places. Now, to the extent they are used at all, they are mostly for recreation (walking and jogging) and also as passageways (walking along the Merrimack Canal is safer than walking along Dutton Street, for instance). The city, the National Park, and all the rest of us should make a real effort to expand our use of these waterfront walkways with more cultural and social activities, but also find a way to draw retailers and restaurants (maybe start with food trucks?) onto these waterfront pathways. In the summertime, it seems that many people delight in outdoor dining in downtown Lowell. As nice as that may be, sitting at a café table alongside a peaceful canal might be just as nice as sitting alongside the traffic on a major downtown street.

There are many other projects already underway or close to commencement that add to this feeling that things are moving in a good direction. There is the Thorndike Exchange development on Thorndike  Street; the high rise apartment building on Wellman  Street near Cross Point; the Vision Development privately-owned dormitory at Merrimack Plaza; the re-invention of the Lord Overpass; the addition to Lowell High School; the Markley Group is quietly  becoming one of the most important data centers in New England on Prince Ave; and many more.

It’s not perfection, but at least it’s all moving in the right direction. The question is, how do we make it even better.

One Response to Lowell Week in Review: September 25, 2016