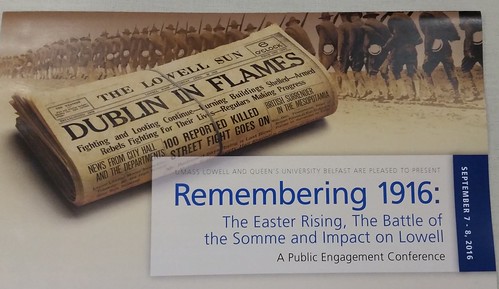 UMass Lowell’s Center for Irish Partnerships joined with Queen’s University Belfast last week to present an Irish history conference at the Inn & Conference Center. “Remembering 1916” explored two major events of that year—The battle of the Somme in France and Belgium; and the Easter Rising in Dublin—and the impact of both in Lowell.

The World War One battle of the Somme was the major allied offensive of 1916. It began on July 1, 1916 and ended on November 18, 1916 and was one of the costliest battles in history with more than one million men killed or wounded. Two divisions from Ireland, one from the Protestant North, and the other from the Catholic South, fought in the battle. The devastating casualties suffered by both of these divisions led both the Catholics and the Protestants to believe that their sacrifices strengthened their competing political positions back in Ireland. And despite the high cost, the battle of the Somme resulted in a stalemate and certainly exhausted the British offensive capability, which made America’s entry into the war in 1917—and the contribution of many men from Lowell in the American Army—all the more important.

The Easter Rising was an armed revolt by Irish nationalists against British rule that began on April 24, 1916 (Easter Monday). Planned as a nationwide revolt, most of the action occurred in Dublin. After initial success in seizing some key government buildings, the British rushed reinforcements into the city and the rebels surrendered after five days. Initially, most residents of Ireland had little sympathy for the rebels, but when the British began systematically executing their leaders in the days after the revolt ended, Irish public opinion quickly swerved in the rebel’s favor. The Rising was a critical step towards Irish independence which came just a few years later. Because of the large population of Irish immigrants and descendants of Irish immigrants in Lowell, people in the city were vitally interested in the Rising and its aftermath. 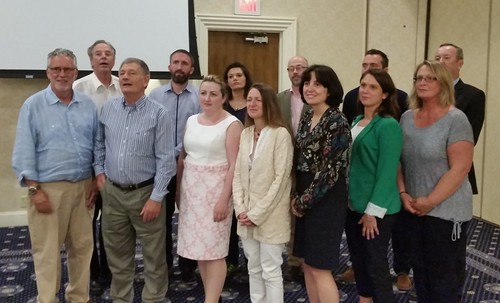 The conference opened with remarks by UMass Lowell Chancellor Jacquie Moloney and UMass President Marty Meehan, who said the “great universities must have an international focus because students won’t become globally competent unless they are exposed to the rest of the world.” He commended UMass Lowell for its international partnerships, particularly its Center for Irish Partnerships and singled out Victoria Denoon as the prime mover of the organization.

Professor Audrey Horning of Queen’s University Belfast then explained that the conference was more about how the Battle of the Somme and the Easter Rising were being commemorated in Ireland today than with the substance of the two events. Throughout the four year commemoration of World War One, the Irish visitors seek to “engage and provoke broader public discussions on history that is still disputed.”

The keynote speaker, William Blair of the National Museums of Northern Ireland, explained that during “the troubles” (the long period of violence between Catholics and Protestants that eased only recently), both sides appropriated the memory of the events of 1916 to justify contemporary political violence. The museums of Northern Ireland saw the 2016 commemorations as an opportunity to bring people together and attempt reconciliation. This has been a tricky undertaking because, according to Blair, “culture is the new battleground in post-conflict Ireland, especially in places experiencing economic difficulties.” Subsequent speakers spoke of exhibits and events in Belfast that brought people together and got them thinking, about the past but also the present and the future.

Lowell was well represented at the podium. UMass Lowell history professor Bob Forrant spoke about the response here in Lowell to the Easter Rising in Ireland. He discovered a man named Sean Costello who died in the early days of the rebellion, who had siblings living in Lowell at the time. Bob also spoke at length about a man named Joseph Smith who was from Lowell and is buried in Lowell, who played a big part in the response of the Irish in Massachusetts to events in Dublin.

The other Lowell speaker was Eileen Loucraft, founder of the Lowell Doughboys blog. Eileen spoke of the experience of some of the 6000 men from Lowell who served in the military during the First World War. She told detailed stories of several of the soldiers who lost their lives in the war including one who was born in Lowell, served in the Canadian Army, was killed in France, and is buried in a British cemetery. Eileen also showed a Google Maps mashup she created that shows the location of all World War One monuments in Lowell.

In the end-of-the-conference “round table discussion,” Professor Keith Lilley of Queen’s University Belfast, mentioned that two of the objectives of the Irish efforts to commemorate the War were to find “transnational connections” and also to use mapping tools to help tell the story. He singled out Eileen’s story about the guy from Lowell with the foreign connections as an example of transnationalism, and cited her map as an example of something that could be linked to similar maps of memorials in Ireland.

It sounds like a theme for the 2018 UMass Lowell Center for Irish Partnerships conference may have already been identified at this year’s conference.