Last Thursday, Libertarian Presidential Candidate Gary Johnson was asked on MSNBC,  “What would you do about Aleppo?”  He blanked and stumbled and answered, “What is Aleppo?”  That whole day both corporate media and social media criticized him for “lack of knowledge on foreign policy” and of course in many circles he was ridiculed.

Johnson could not get any press up until that moment, but then every network and publication was covering the story.  Up to that point, the media deemed him not worthy to be mentioned when discussing this presidential race, but now this major gaffe catapulted him to a viable candidate?

The criticism fell into two general categories:  “See, Libertarians don’t know and don’t care about foreign policy” and the lecture, “hey, Gary, this is what Aleppo is.”

The first link sends you to a New York Times article that needed to be corrected because they refer to Aleppo as Syria’s capital and the second came from Huffington Post and basically all you had to do is Google to get the information they listed.

The discussion should not only be about what Aleppo represents today, but also how did we get this point regarding Aleppo and the rest of the region?  I say we, because as was proven yesterday, the major powers such as the U.S. and Russia, have some kind of authority; they just agreed to a cease fire in another country’s civil war.

So, no, now that we have had a couple days of outrage because Johnson could not answer the Aleppo  question, will the media now lead the U.S. in an educational campaign that will focus on U.S.-Syria relationship? Will we discuss why so many countries are playing a role in sustaining the different sides in this conflict? Will we ask Europe to once again take in Syrian refugees? And will we be satisfied with just the 10,000 refugees United States has taken in? Or will the discussion move on to Hillary’s health? 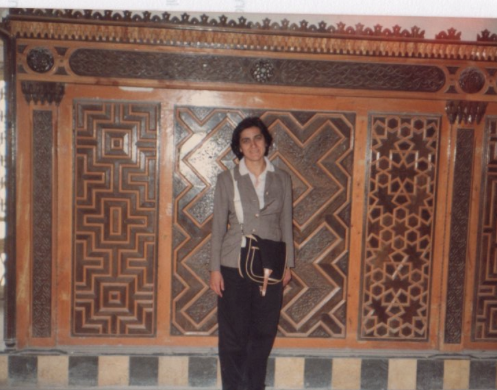 Mimi (author of this post) in the Throne Hall of the Citadel of Aleppo, April 1984.