Local Development Roundup: It was a relatively quiet week in local political news so let’s take a quick look at the status of some of the major development projects in the city:

Hamilton Canal District: There have been a few positive developments for the Hamilton Canal District including the selection of Winn Companies as the Master Developer, the plans by Watermark and Genesis Healthcare to construct new buildings, an earlier announcement that work would commence on the Judicial Center sometime this year, and the apparent resolution of the “where to park the tour buses” issue with an agreement to use LRTA-controlled land off YMCA Drive. Those are all good things, so why does the Hamilton Canal District still seem stuck? I think the proposed parking garage behind the Market Mills residences is the current roadblock. As much as I want more people to bus, bike, or walk to work, the reality is that companies won’t invest millions of dollars in new buildings unless their employees/occupants have a reasonable plan for parking. I recall the city council passing a motion not long ago that asked for a report on the status of the garage. That report, when it is delivered to the council (it won’t be this week), should shed some light on the situation.

Vision Dormitory: This is the proposal by a Pennsylvania-based company to build a privately-owned, 400+ bed, college-type dormitory across from Lowell High School on a parcel the used to house Fred C. Church Insurance Company but which is now owned by the Lowell Five Cent Savings Bank. Vision has received all of its approvals from city boards, but the owner of the abutting Riverplace Towers has appealed the decision of one of the boards. Such an appeal will be resolved in a Massachusetts courtroom which could tie up the project for a substantial period of time. Hopefully the proponent and the appellant will reach some kind of quick out-of-court resolution so the project can commence. I’m anxious for this building to be constructed and occupied because it has no parking. Well that’s not technically correct. There are a handful of spaces on the premises and the city has promised a hundred or so spaces in parking garages at market rates but those spaces are scattered throughout the city and not all at the adjacent Ayotte Garage. The premise of this project is that the building occupants will be carless students. To get to class, to work, to the grocery store, or anywhere else they’ll have to rely on their feet, their bicycles, or buses. If more people in the city shifted to these alternate modes of transportation, a lot of our traffic congestion and parking problems would dissipate. That’s not something that is going to happen soon, but with these students setting the example, perhaps others will follow. 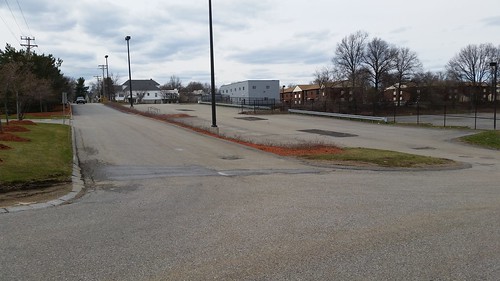 Wellman St, looking towards Chelmsford. Apartment building would be to the right 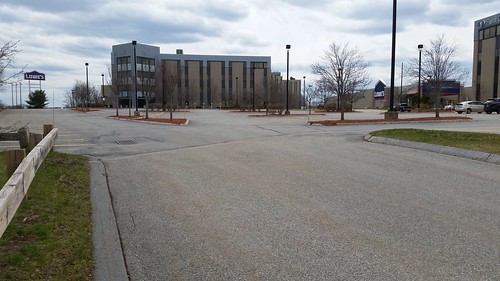 Wellman Street Apartments: This is the proposed 240-unit apartment building off of Chelmsford Street and next to Lowe’s. Unlike the Vision proposal, this development will have 498 on-site parking spaces. At the last council meeting, councilors received a report from city agencies that essentially said a big residential development is the only thing currently feasible for the Wellman Street site given the economics of commercial versus residential buildings. The developer garnered some good will from city government by agreeing to a provision in its special permit that would require a “payment in lieu of taxes” commitment if the building is ever sold to a nonprofit entity (which would not normally have to pay real estate taxes—more on that below). The target audience for this apartment building is people who commute to work via Routes 3 or 495. Hopefully some who work across the street in the Cross Point Towers will also choose to reside there. Having people who both live and work in that neighborhood might start diluting the car-centric design that dominates that section of Lowell, the result of another Urban Renewal project – Industrial Ave – that never achieved its intended goals. Today, with several restaurants, grocery stores, the cinema, and the start of the Bruce Freeman bike trail all within easy walking distance of Wellman Street, the seeds of a nice, walkable neighborhood are all there but the existing network of extra-wide streets, limited sidewalks, and acres of surface parking lots sends the message that pedestrians are not welcome.

Markley Group: This coming Tuesday night there is a public hearing on the Markley Group’s request that the City “vacate, discontinue and abandon certain public interests . . . in driveway to Prince Company, a portion of Prince Avenue, and a portion of Carter Street,” which Markley contends is critical for the operational security of its facility. The relevant departments of City government have all consented, but at least one neighbor has consistently appeared before the council and spoken against this transfer (to the discomfort of some councilors). I’ll be watching and reporting on the council meeting so check out my City Council Meeting report late Tuesday or on Wednesday to find out what happened.

Payment in Lieu of Taxes (PILOT)

When UMass Lowell announced its intent to purchase the Perkins Street apartments a few weeks ago, it set off a wave of anger about the existing tenants who will be displaced, but it also unleashed the recurring angst about entities that own property but don’t pay property taxes like state entities such as UMass Lowell and non-profit corporations like Lowell General Hospital). Among the motions filed for this Tuesday’s city council meeting is one by Councilor Elliott requesting the council “discuss adopting a resolution in support of House Bill 2584 and Senate Bill 1451 relative to PILOT legislation.”

Senate Bill 1451 is titled “An Act relative to payments in lieu of taxation of organizations exempt from the property tax.” It was sponsored by senators William Brownsberger, Jamie Eldridge, Chris Walsh and Jason M. Lewis. If this bill becomes law, it would allow cities and towns who “accept” this section, to assess real estate and personal property taxes on entities that are now exempt from paying those taxes at a rate of 25 percent of the tax they would pay if they were not exempt. House Bill 2584, filed by Representative Stephen Kulik (D-Worthington) seems to contain language identical to S.1451.

In a related development, the Lowell Sun reported on Friday that State Representative Dave Nangle had filed an amendment to an economic development bond bill that has since passed the House (with the amendment included) and awaits action in the Senate. Nangle’s amendment would require an entity that is exempt from paying property taxes to pay property taxes on real estate it purchases on a four year sliding scale. For example, a nonprofit corporation buying a building would pay 100 percent of the full property taxes in the first year of ownership; 75 percent in the second; 50 percent in the third; and 25 percent in the fourth. After that, no property taxes would be owed pursuant to this amendment.

The purpose of the Nangle proposal is to reduce the shock to municipal revenue projections that occur when properties that yield a large amount of property tax revenue suddenly come under ownership of entities exempt from paying property taxes.

I haven’t dug into the underlying statutes that would be amended by either of these measures to determine whether they would apply to properties owned by the Commonwealth of Massachusetts or just to those owned by nonprofit entities (which, as I continuously mention, are two different things).

Despite the misty conditions yesterday morning, 104 people joined the Lowell Walk on Literary Lowell which was led by Sean Thibodeau of the Pollard Memorial Library. Sean entertained and enlightened everyone with stories of famous authors who visited or wrote about Lowell (Edgar Allan Poe and Charles Dickens) and those who came from Lowell (Lucy Larcom, Elinor Lipman, Jack Kerouac). At the request of several on the tour, Sean will provide me with a bibliography of Lowell books which I will post here on the website for future reference.

There is a great tradition literature and poetry in Lowell that continues today. Please support that by purchasing books by local authors and by attending events like poetry and author readings (of which there should be more, given the high level of interest). And visit our locally-owned and operated bookstore, Hypertext Bookstore Café at the corner of Merrimack and John Streets. After your visit to Hypertext, you might want to cross Merrimack Street and visit the newly opened Greenspoon Restaurant which Jen Myers just reviewed on her blog.