It was sad to say farewell to Warren Carey last Friday afternoon. But, the Funeral Mass at St. William’s in Tewksbury was joyous, thoughtful, prayerful, music-filled and full of remembrance from Fr. Dwight Hoeberechts, OMI, the celebrant who blended the traditional Catholic homily with “notes” about Warren gleaned from his own experience, from media articles and quotes and from stories told by his beloved Liz – and from his sons Michael and Tom – two of his eight children – who offered their memories of “Warren”, “Dad”, “Grampy” and a laundry list of other titles and roles his sons reckoned for him – from banker and landlord, cook and advisor, social director and teacher to other roles both profound and mundane. The love, affection and respect as well as the anticipated missing of Dad was all there. 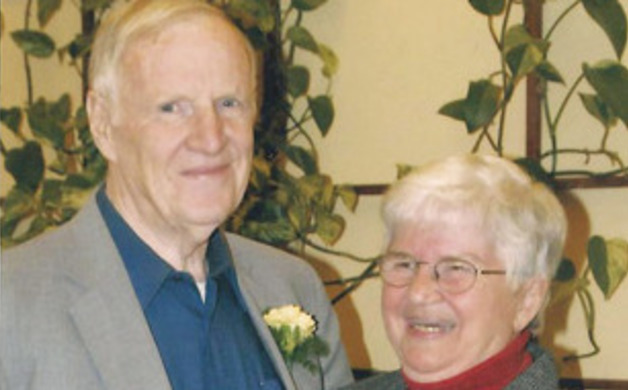 The Church was packed – full of family, friends, neighbors, officials and townspeople… all paying their respects to Mr. Tewksbury – the Town Historian – the former longtime Treasurer/Collector – the Library Trustee – the outspoken citizen-leader at Town Meeting and for people like me – the former longtime Chairman of the Tewksbury Democratic Town Committee.

Warren Carey loved Liz, his family and his town. He held his role as a citizen as sacred. He loved music and a good time with family and friends. He was loyal to his friends and steadfast as a supporter. He was feisty… a man of opinion expressed in an oddly distinctive voice. He would shake his head at things then lift up his face and voice to be seen and heard. He was an honest, righteous man who sparred over issues, but stood for everyone’s right to speak even if he disagreed. He listened! He did his due diligence! He contemplated! He spoke-up!

We often laughed over his “everyman” friend whom he called “Joe Bananas.” If Joe was in the Church or was one of the over 225 people at graveside or at the mercy meal, he would have joined us in this Irish Blessing we offered for Warren Carey at his roast in 2011:

“May your neighbors respect you,
Trouble neglect you,
May the angels protect you,
And heaven accept you.”

Warren Carey – may you rest in peace.