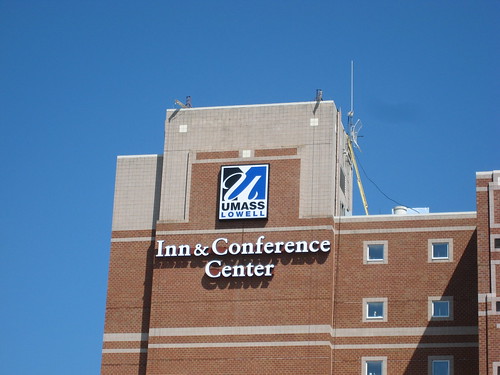 Does Lowell really want to be a college town?

Some history: Back in 1986, Emerson College, a school with an international reputation for excellence in communications and the arts, decided to move from its long-time Back Bay home in Boston to the banks of the Merrimack River in Lawrence. The then mayor of Lawrence (Kevin Sullivan) negotiated an agreement whereby the city would take by eminent domain certain parcels of land along the river and then sell them to Emerson. In turn, the college would build a $85 million, 52-acre campus and move entirely to Lawrence.

The affected landowners, most notably the Lawrence Elks Lodge, preferred to keep their land and filed suit to prevent the taking. While the city’s action was ultimately upheld by both the Superior and Supreme Judicial Courts, the litigation delay, the ill-feelings from the community, and the changing Boston real estate market, caused the deal to fall through and Emerson stayed in Boston.

In a December 10, 1986 article, the Boston Globe’s Peter Sleeper asked “Why doesn’t Lawrence want Emerson?” In his reporting, he found a couple of reasons: “There is no shortage of worry that Emerson will trigger higher property taxes to cover the need for more municipal services” and “Community leaders say the resistance [to Emerson] reflects a deep mistrust of fancy-pants outsiders . . .”

Back to the present day: Whenever I hear that UMass Lowell has acquired a new property in this city, I quietly cheer because economically, UMass Lowell is the best thing this city has going for it and the deeper the University becomes embedded in the fabric of the city, the better. But my cheers are drowned out by a noisy chorus of “but what of the lost property taxes?”

True, UMass Lowell does not pay property taxes on real estate it owns, but as the University repeatedly points out (see “The Economic Effect: How UMass Lowell Benefits the City of Lowell”), other benefits, both tangible and intangible, accrue to the city from the University.

That is not to say that the relationship is perfect. Could the city manager have been brought into the picture on the sale of the Perkins apartments to the University sooner? Probably. Was the de facto treatment of the 2013 agreement on back taxes for the hotel (now the UMass Lowell Inn and Conference Center) as a confidential document at odds with openness in government? It seems that way. But City Manager Murphy and Chancellor Moloney are both committed to the mutual benefits that flow from a good relationship between the city and the university, and left to them, neither the Perkins sale nor the 2013 tax agreement would cast a long-term chill on an otherwise excellent relationship.

The problem is that many in Lowell seem predisposed to criticize loudly anytime the University does something perceived as subtracting from the community (i.e., reducing property tax collections) but ignore all the good the University does and has done for the city. What would the Inn & Conference Center be today if UMass Lowell hadn’t stepped in? How about affordable housing, because what else would have gone there? Certainly not another hotel. And what about the arena? Imagine the howls at budget time when the annual losses to the city were tallied. How about 110 Canal Place? When the Hamilton Canal District was stagnant, UMass Lowell stepped in and rented that space as the University’s Innovation Center, thereby creating some positive momentum for HCD. What about the takeover of the Enel Bridges? Last I checked, UMass Lowell was contributing $2mil to that venture while the city was chipping in $600,000 (along with $13.4mil from the Feds). Never mind the daily injection of University brain power into the city’s knowledge economy, or the enhanced status Lowell derives from being home to a major University.

There is a big picture here. Don’t lose sight of it.

The city council is on its summer schedule and now meets every other Tuesday. The gap is apparent in this week’s list of new motions – there are 22 (although one-third seem to deal with UMass Lowell and property taxes). The full agenda is available online.

Back in early May, Councilors Belanger and Samaras requested a report on contracts the city has with other entities for the use of downtown parking garages. The city Parking Director’s report is on this week’s council agenda. Here are the highlights:

Middlesex Community College is the biggest institutional user of city parking garages. MCC has 225 monthly passes for faculty and staff and provided nearly 200,000 individual parking validations last year for students and other authorized users. These are not limited to any one parking garage. For this, MCC pays the city $566,000 annually, which is nearly 9% of the parking department’s total revenue, but is also a 50% discount over market rate parking.

The Ayotte Garage (across from Lowell High School and the Arena) as 1250 spaces. An easement from 1985 grants 750 spaces to the owners/occupants of Wannalancit Mills which are Farley White and UMass Lowell. The payment for the parking passes associated with these 750 spaces is just 44% of the market rate for the spaces. UML has an additional 217 spaces billed at market rate and an option to use another 150 that hasn’t yet been exercised. Another 657 pass cards are used by city of Lowell employees (477 for Lowell High staff and Public Schools central administration, 112 for police and fire personnel, and 68 for City Hall employees). Lowell High students may also purchase parking passes for $17 per month.

The Early Garage (on Middlesex Street) 950 spaces. Lowell Community Health Center with 247 spaces (mostly market rate) is the largest user of the Early Garage. (And with expansion, LCHC needs 125 more spaces by June 2017). Lowell Community Charter Public School has 150 monthly passes and 9000 validations, all at Market Rate. Then the various mill buildings that have been converted to residences (County House Lofts, Adden Furniture, and Appleton Mills) all were required by our zoning ordinances to obtain a certain number of (market rate) parking spaces in this garage.

The Downes Parking Facility (John Street) 1141 spaces. Residents of Boott Mills, Massachusetts Mills, and the apartments at 24 Merrimack Street have monthly passes in this garage, but all pay market rate. Most of those parking in this garage during the day are students at Middlesex Community College.

The Roy Parking Facility (Market Street) 1012 spaces. There is only one agreement related to this garage and it’s just for 24 spaces at the Moller building on Middle Street. The biggest user is Enterprise Bank (about 250 of its employees park there daily).

There was an observation made in the report about the Early Garage, but it is more of a system-wide issue that is bearing down on the city: “In the absence of a new parking facility located in the Hamilton Canal District, the Early Garage would need to meet the parking need of the new courthouse and the fully developed area, which would overburden the facility.”

Congratulations to the city of Lowell and its 13 partner organizations on the award of a $475,000 Working Cities Implementation Grant from the Federal Reserve Bank of Boston. The focus of the grant, which will be spread over three years and used exclusively in the Acre, is neighborhood revitalization, workforce development, and improving access to economic opportunity. The Lowell team intends to use the funds specifically on early childhood school readiness; economic development; and language and cultural inclusion. 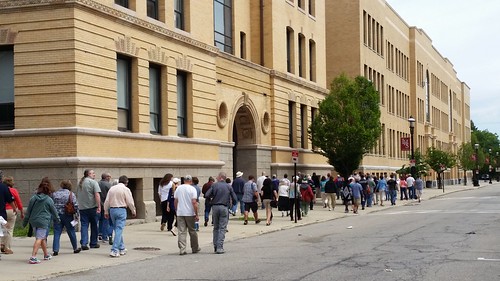 Thanks to Fred Faust for organizing and leading the inaugural Lowell Walks of the 2016 season. The topic was “Preservation Success Stories” and we heard many of them, especially of buildings on Shattuck and Kirk streets, Boarding House Park, the Mogan Cultural Center, and the Boott Mills.

Next week’s walk will be led by Craig Thomas of the city’s Department of Planning and Development. The topic will be Hamilton Canal Update. The tour is free, lasts 90 minutes, and will begin at Lowell National Historical Park Visitor Center, 246 Market Street, at 10 am on Saturday, June 18, 2016.