Congratulations to everyone at Do-It-Yourself Lowell for the excellent downtown Lowell history trail they launched this weekend. The group’s website says this about the trail:

IDEA: A short trail, marked with temporary paint, signs, or another design method that reaches from the Boott Cotton Mills Museum to the NPS Visitor Center. Along the trail there would be temporary interpretive signs or pamphlets and signs mentioning the walking distance to popular nearby attractions. The exact route would be chosen by the citizens making the project happen.

BENEFIT: Such a trail has been discussed by the community for some time. By making a temporary trail, we can test out a route and decide whether it should be permanent. It would also be a low-cost way to do it quick. The trail would encourage visitors to walk instead of drive and may attract the attention of locals who haven’t visited attractions. It would help economic development by pointing out attractions.

Yesterday I grabbed my camera and followed the green signs around downtown and was extremely pleased with the result. I’d urge everyone who can to find their way to the trail which begins outside Lowell National Historical Park visitor center at 246 Market Street. For those of you who can’t make it, I transcribed the text of the signs and posted them below with a few pictures of the featured attractions.

Welcome to the Lowell Pop-Up History Trail! Follow the markers to the Boott Cotton Mills Museum and back again while learning fun facts about the sights around you. 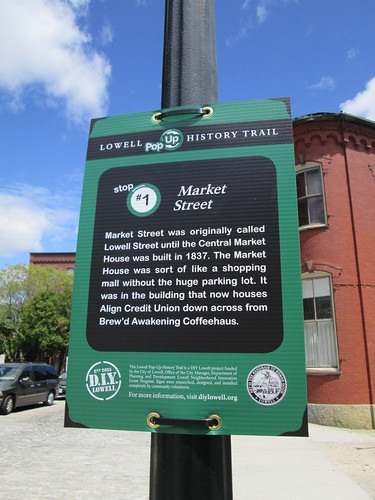 Stop 2 – Shattuck Street – Named for Moses Shattuck (1783-1842), early resident and main foreman for all outdoor labor groups (canal diggers). Famous for wearing a blue dress coat with a red bandanna around his neck, he lived with his wife Ann Butman in a small, white cottage along the Merrimack Canal. 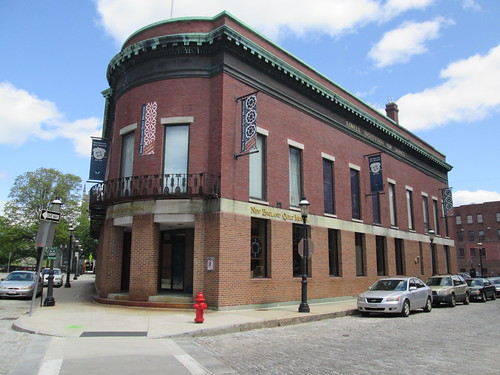 Stop 3 – A Quilter’s Dream – The New England Quilt Museum was founded in 1987 as a regional museum dedicated to the quilter’s craft. It features exhibitions, stores, and a library. It is open in the summer Tuesday through Saturday 10 am – 4 pm, and Sundays 12 pm – 4 pm. 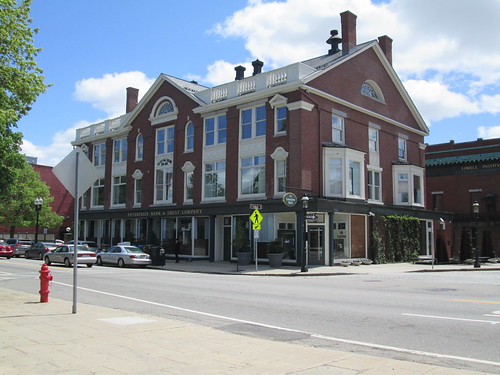 Stop 5 – Rock Bottom Prices – The Bon Marche department store emphasized their “rock bottom” prices by calling attention to an actual piece of rock ledge that jutted out of the store’s floor. Follow the markers to cross at Palmer Street and continue down Merrimack Street.

Stop 6 – Merrimack Street Cow Path – The street you’re walking on is older than Lowell itself. Merrimack Street shows up on maps in East Chelmsford as early as 1770. It crossed the Concord River at one of the first bridges built in the area in 1774.

Stop 7 – First CVS Location – Back in 1963, CVS opened its first location in the storefront across the street (where Marx Running and Fitness is now). Founded by Ralph Hoagland and brothers Sidney and Stanley Goldstein, the chain was originally called the Consumer Value Store – a discount health and beauty aid store where customers bagged their own purchases.

Stop 8 – The Star is Born . . . Ruth Elizabeth “Bette” Davis (1908 – 1989) was born on Chestnut Street in the Highlands. Her parents divorced when she was ten, and she went to live with her mother in New York City. She soon became a huge movie star, earning two Academy Awards and eleven nominations. She never forgot her Lowell roots. 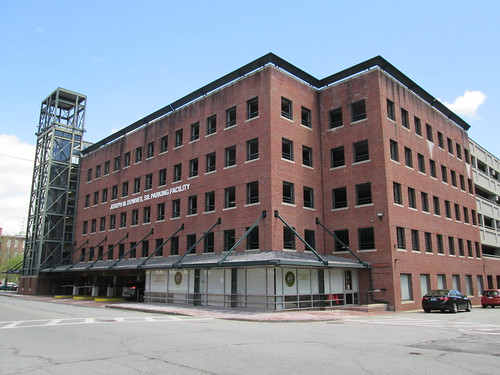 Stop 9 – Bell-evator Tower – The elevator shaft in the John Street Garage is one floor higher than the main structure because it was originally conceived as a bell tower, in keeping with the historic architecture of the surrounding area. However, no funding could be found to buy and install the bells. 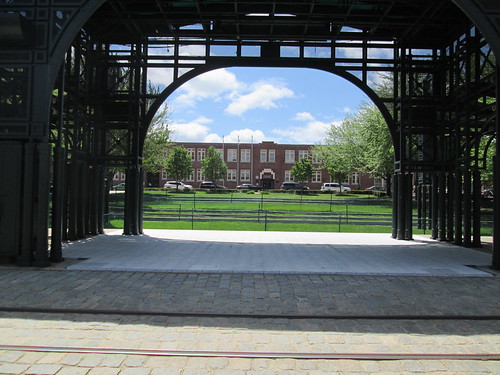 Stop 10 – Boarding House Park-ing Lot – Beginning in the 1830s, the area to your left was filled with rows of Boott company houses. By the 1980s, most were demolished, and this area was a parking lot for a paper company. After a dramatic transformation, it is now a hugely popular venue for outdoor concerts including the Lowell Summer Music Series and Lowell Folk Festival.

Stop 11 – Birthplace of the Phone Number – In 1879, there was a measles outbreak in Lowell. Dr. Moses Greeley Parker feared switchboard operators would be hard to replace if they got sick. So, he came up with the idea of assigning numbers instead of names to the nearly two hundred telephone subscribers and keeping them in a printed directory.

Stop 12 – Heeeere’s Johnny! – Ed McMahon (1923 – 2009) is most famous for being an announcer and second banana to Johnny Carson on the Tonight Show. After graduating from Lowell High School, he got his first job in broadcasting at the former local radio station WLLH-AM. He was a big fan of Elliot’s Hot Dogs too. 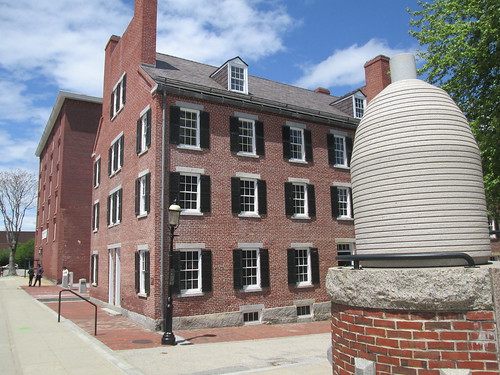 Stop 14 – Mogan Cultural Center – Since opening in 1989, the Mogan Cultural Center has strived to “tell the human story of Lowell.” Named for Dr. Patrick J. Mogan, an educator and visionary who believed Lowell served as an agent for helping people reconnect to their cultural traditions. He was a leader in creating Lowell National Historical Park. 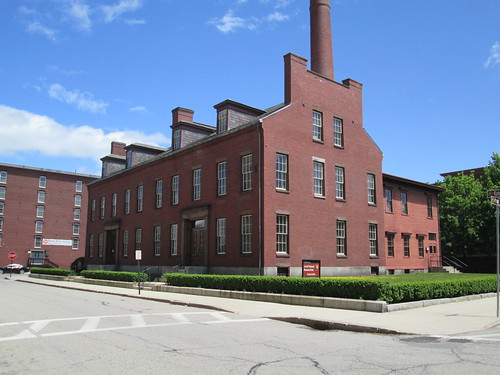 Stop 15 – Managers, from Mills to Park – In the 1800s, the Boott Mills and Massachusetts Mills “agents” (what we call head managers today) lived in this duplex. When the Lowell National Historical Park was being built, it was originally considered for a museum about the agents and owners of the mills. Instead, it was turned into the Park headquarters. 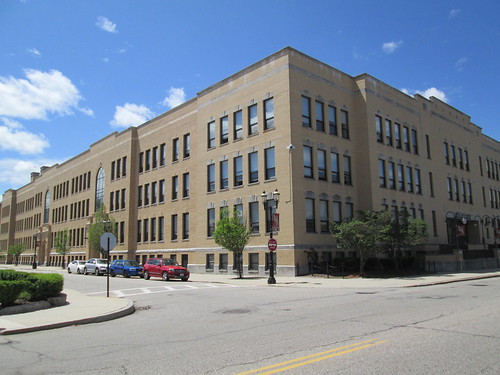 Stop 16 – The Game of Life – The man who started the company that gave the world the classic board games Candy Land, Operation, and Battleship – that’s right, Milton Bradley (1836 – 1911) got his Game of Life going in Lowell. Born in Maine, his family moved to Lowell when he was eleven, and he graduated from Lowell High.

Stop 17 – Lowell High School – Lowell High, the first co-ed public high school in the United States, started in 1831 with 47 pupils. Since its inception, it has moved and grown along with Lowell. There are almost 700 students anticipated in the 2016 graduating class. Its distinguished alumni are too numerous to list here.

Stop 18 – Kirk “Bacon Double” Boott – Kirk Street is named for Kirk Boott (1790 – 1837), one of the original investors and a primary planner and manager for the canal system. The Boott Mills were also named in his honor, and thereby the belly busting sandwich at Arthur’s Paradise Diner on Bridge Street. 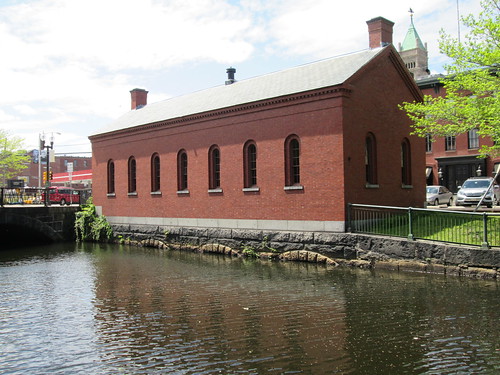 Stop 19 – The Underground Canal – The Moody Street Feeder Gatehouse sits atop the end of an underground canal which runs, aptly enough, under Moody Street from the Western Canal. The feeder and gatehouse were completed in 1848, and were designed by James Francis as part of the great Northern Canal project.

Stop 20 – Telephony Exhibition – This is the site of Huntington Hall, where Alexander Graham Bell showcased his new “telephony” device to potential investors in 1877. Pay attention along this walkway, and you will see the first words Bell spoke into his device.

Stop 21 – B&L RR: Shake Rattle & Roll – This area was once the terminus for the Boston & Lowell Railroad – opened in 1835 as one of the first railroads in North America. Builders soon had to replace the original granite bed with wooden ties because the granite’s hardness was shaking the trains apart, destroying the freight, and jangling the nerves of the jolted passengers.

Stop 22 – A Streetcar Named Desire (National Streetcar Museum, 25 Shattuck Street) – The National Streetcar Museum opened in 2003 in the Mack Building to your left. Once a major streetcar hub, Lowell National Historical Park now runs free trolley trips all summer long. Keep an eye out for the streetcar named “Desire”, which ran in New Orleans from 1924 until 11964. It was nearly destroyed by vandalism before coming to Lowell. 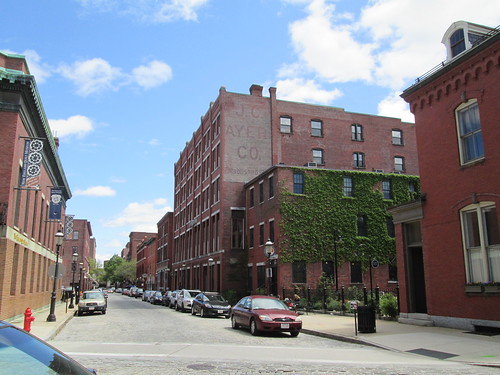 Stop 23 – You Got a Good Sarsaparilla? – Lowell’s J.C. Ayer was making Sarsaparilla long before Sioux City ever tried. Ayer was America’s biggest patent medicine giant. He unveiled his Sarsaparilla as a blood purifying medicine in 1859. It claimed to cure among other things swelling, tumors, pimples, syphilis and ringworm.

This is the Lowell Pop-Up History Trail, a project designed by community members! See Lowell in a whole new way! Send comments to popup@diylowell.org