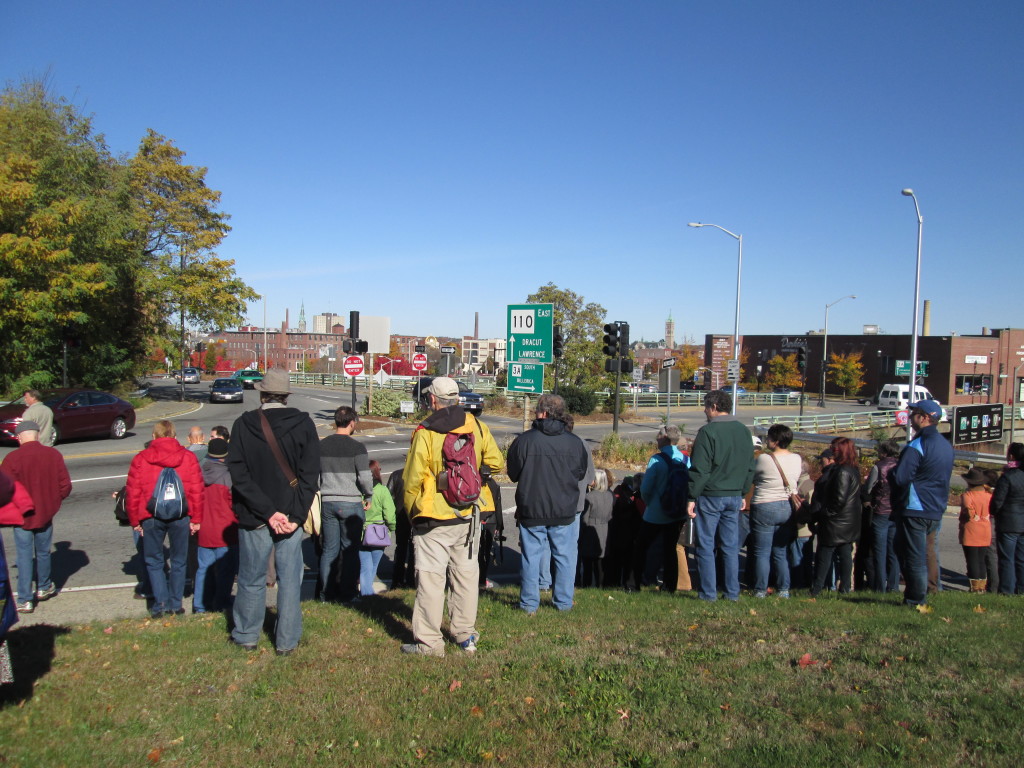 Tomorrow night at 6 pm at the Senior Center at 276 Broadway, the city will hold its second public meeting on the Lord Overpass renovation project. Here’s the notice about the meeting from the city’s Department of Planning & Development:

The City of Lowell is planning multi-modal accessibility and mobility improvements to the Lord Overpass and the surrounding area. At the first of 3 planned public meeting held last fall, we heard from many people requesting better pedestrian and bicycle accommodations along the Thorndike Street Corridor. Attendees of the first meeting were asked to complete a paper survey to help the City collect community suggestions and comments; the City then distributed a web link in late January to offer the opportunity for non-attendees to fill out the same survey on-line. Along with engineering and geographic opportunities and constraints, survey results were used to influence and shape Overpass design concepts. As part of the Project’s public outreach program, the City will be holding the 2nd of 3 planned public meetings to update the community on the status of the project design, present the results of the community survey, and present alternative design concepts for the Lord Overpass. The meeting will be held at 6pm on Monday, March 28, 2016 at the Lowell Senior Center.

The first public meeting was back on November 16, 2015. It was very well attended (See my report on the meeting here).

I have frequently written of the importance of the Lord Overpass and the Thorndike-Dutton Corridor to the ultimate success of the Hamilton Canal project and to making Lowell a welcoming 21st century urban center. Back on October 31, 2015, Paul Marion and I led a walk through this area. Please check out the report I wrote about that experience. There are plenty of pictures that give a sense of the challenges that confront pedestrians in the area. 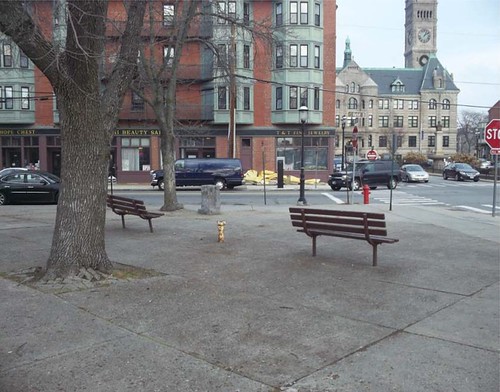 Themeles Square sits at the corner of Market and Dummer streets and is part of the Lowell Housing Authority’s North Common Village. The “square” is about 5000 square feet of grass and walkways that was dedicated to the Themeles Brothers in 2000 for their military service during World War Two.

Today, the area is plagued by broken benches, crumbling concrete walkways, a non-functioning public drinking fountain, and other problems that detract from its use as a public space. Thankfully, the LHA is about to renovate the square (bids are due early in April). The project will install historic-style street lights, fencing, benches, some flowering trees, and the water fountain will be repaired. 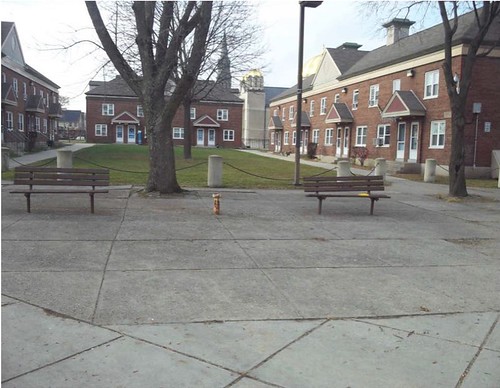 In keeping with the project’s embrace of the historic, the LHA is seeking more information about how that area was used in the past, both before it was part of the Housing Authority and after. LHA is particularly interested in the background of the Themeles Square dedication which occurred in 2000, but also the water fountain which was installed in the 1980s. If anyone has any information they’re able to share, please leave a comment or email me at DickHoweJr@gmail.com and I’ll pass the info along to LHA.

There’s a report on the FY17 city budget in this week’s city council packet. I assume the City Manager and his team will make a presentation at Tuesday night’s council meeting. The report states the target date for delivering the budget proposal to the council is May 17, 2016.

The report also lists seven budgetary challenges facing the city. Here they are:

This week the council will receive a report on the status of the Mack Building on Shattuck Street. The building is owned by the Commonwealth and houses the National Streetcar Museum on its first two floors, and the North Region offices of the state Department of Conservation and Recreation on the third and fourth floors. The museum is open on weekends and the state offices are filled through the week. The state official in charge reports there are no plans to vacate the building although the state is contemplating some exterior improvements in the future.

The developer of the old Butler School property recently sold both of the buildings that were constructed on the parcel after the school was demolished. The first one, now known as 169 Newhall St Extension, sold on March 18, 2016 for $2,040,000. The other, 168 Newhall St Extension, sold this past Wednesday, March 23, 2016, for $2,070,000. The city sold the property to the developer in 2013 for $265,500, but the old school had to be demolished, new roads installed, and the two new buildings, one an auto parts store and the other a discount retailer, had to be constructed. So now the builder has transferred the new buildings to those who will be operating them.

Last Tuesday the council took up the matter of Park Avenue East which runs parallel to Rogers Street, stretching from Boylston Street in the south to Fort Hill in the north. Along the way, it passes between Shedd Park and Lowell Cemetery, and at its Boylston Street end, the Pyne School. Because of Lowell Cemetery and Fort Hill, there are no thru streets running west (towards Lawrence Street), however, there are at least four residential streets running easterly from Park Ave East to Rogers Street.

That’s the geography. Got it?

The issue is whether the portion of Park Ave East running from Boylston Street to Knapp Ave and the entrance to Lowell Cemetery, should be made one way heading towards Fort Hill and if it is, whether it should be permanently one way or just at designated times.

As I understand it, the principal of the Pyne School wants it one way all the time for safety reasons. While most of the students arrive during a 90 minute morning window and are dismissed during a 90 minute afternoon window, there are other students, like pre-K and kindergarten, who leave at various times through the day.

The neighbors feel differently. While they respect the safety and traffic concerns while buses are dropping off and picking up students and are amenable to having it one way for say 8am to 930am and from 230pm to 4pm, they strongly oppose making it permanently one way or one way throughout the day. Because traffic on Rogers Street is so heavy and prone to getting backed up, the most practical way for people on the connecting streets to exit the neighborhood is to drive down Park Avenue East to Boylston Street and leave the area from there.

This past Tuesday, the council put on a case study in confusion. I watched the meeting intently but was left with no idea of what the council had done (a state at least a few councilors shared, I suspect). Whatever the council did on Tuesday, there’s supposed to be a public hearing on a new ordinance – what it says, I’m not sure – on the one way issue at the April 5, 2016 city council meeting.