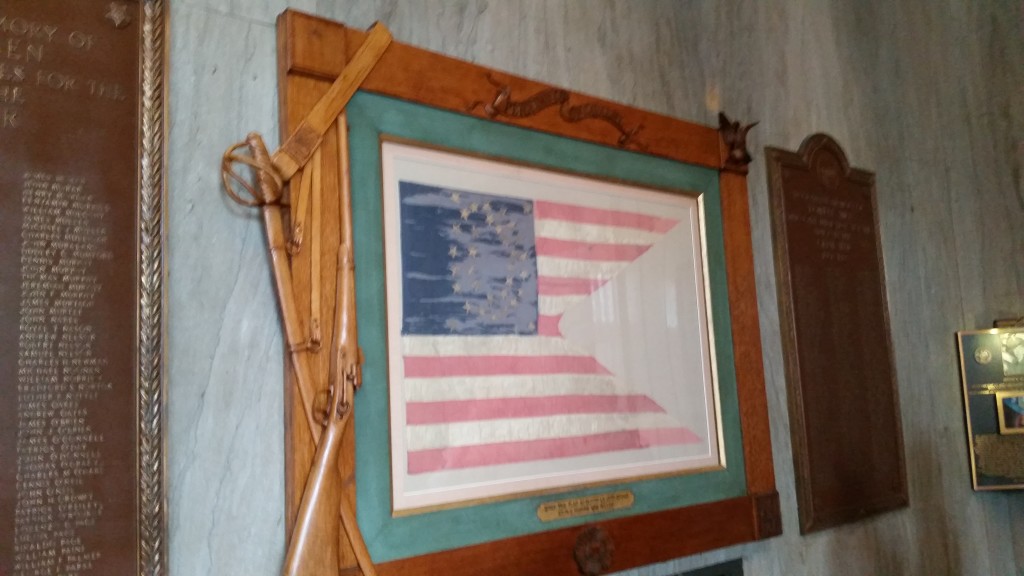 This afternoon at 2 p.m. at the National Park Visitor Center at 246 Market Street, I will give a Moses Greeley Parker Lecture on “The Solon Perkins Flag.” The talk is free and the forecasted snow is not supposed to amount to much, so please join me for the presentation.

As I wrote earlier this week, Solon Perkins is best known for his service as a Union Cavalry officer in the Civil War, an undertaking that cost him his life when he was killed in action in 1863. The American flag carried by his unit in battle became a memorial for Perkins, but it was lost at some point and not re-discovered until 2014. The Greater Lowell Veterans Council restored the flag which now hangs in the Hall of Flags in the Lowell Memorial Auditorium.

My talk today will dig into life at Lowell High in the 1850s, the role played by the city of Lowell in the global cotton trade, the experience of soldiers from Lowell in the Civil War, and the legacy of Solon Perkins, his family, and the men he served with during the war.

City Council Takes to the Road

I thought having the meeting in the neighborhood worked very well and the people who were there that I spoke with afterwards agreed. I understand that the subcommittee plans to continue doing this, rotating through the neighborhood for meetings.

I guess the one downside is that subcommittee meetings held outside of City Hall won’t be televised or recorded. Many years ago when I was in the Citywide Parent Council, we had some members trained to use LTC’s video equipment. We would sign out cameras and microphones and record our meetings for later telecast. That was in 1996; in 2016 it should be even easier. Something for everyone to think about.

This coming Monday, the Planning Board will entertain a proposal to construct a 240 unit apartment building with 480 parking spaces in an attached multi-level garage, at 42 Wellman Street which runs off Chelmsford Street, right alongside Lowe’s. Various city departments have reviewed the proposal and have submitted written comments, which make for interesting reading.

I apologize for missing last Tuesday’s city council meeting. For me, missing a council meeting is like missing a trip to the gym; skipping one makes it harder to go back to it the next time, but I do hope to cover this coming Tuesday’s meeting. I also hope to watch the replay of last week’s meeting and report on that at some point.

Empire of Cotton in Lowell

The reason I missed Tuesday’s council meeting is that I was at the National Park Visitor Center for another Moses Greeley Parker lecture, this one by Sven Beckert, author of Empire of Cotton. I had read the book when it first came out last year and was not surprised that it was a finalist for the Pulitzer Prize because it’s a fantastic book. Beckert immediately won over the crowd Tuesday night with his opening line: “For me, speaking in Lowell is like a Renaissance scholar speaking in Florence.” That’s a comparison I’ll take. Beckert’s book is on sale at the National Park Visitor Center, so you can buy a copy when you come hear me speak this afternoon. If you missed it, my blog post on Beckert’s talk is here.

For the second year, Lowell’s big St. Patrick’s Day event was a dinner rather than a breakfast. I like the dinner, partly because the Inn & Conference Center does a better job with corned beef and cabbage than it did with bacon and eggs, but also because people don’t feel the need to slip out early to get to work. That said, this year’s event did seem to go a bit long. The buffet line opened at 5 p.m. and the last joke was told at about 8:15 p.m. I wrote down some of the funnier jokes but found that Grant Welker had included them all in his story the next day (which seems to be still available online if you missed it).

If organizers are looking for ways to streamline the event—besides the obvious imposition of stricter time limits on speakers—they could dispense with the professional comedian. They are professionals so they typically are pretty funny, but I can get better at a comedy club or on cable TV. The fun of the Lowell St. Patrick’s Day dinner is to hear from the locals. It may be painful, but that’s what makes it funny.

A few years ago I started listening to a police radio in the evening while working on the computer. It was interesting and addictive. But I stopped listening after a while, mostly because it created a false impression of what was going on in the city. Those voices crackling on the radio created a concentrated flow of negative news that tainted everything else. I’m not saying we should stick our heads in the sand when it comes to acknowledging crime, but I am saying that we should put things in some kind of context, which raw radio traffic does not do.

Two city council elections ago at a time when crime seemed to be rampant, I said to some candidates, only partly in jest, that the easiest way to reduce the perception that Lowell was a crime-ridden city was to hire Rob Mills away from the Lowell Sun. That’s not a critique of Rob’s reporting. It’s an acknowledgement that he’s good at it—almost too good. That’s partly a function of technology. Rob, and all the other Sun reporters, make extensive use of Twitter for real time reporting, especially of public safety stuff like fires, traffic accidents, and police calls. I don’t listen to the police scanner, but I do scroll through Twitter with some regularity and I see Lowell Sun crime tweets when they appear. They make for interesting reading, but like the police radio, they don’t have any context.

And not every report of a crime means that a crime has been committed. Consider these two tweets from Rob Mills from just last night:

4:15 p.m. “Tewksbury has a report of a possible robbery but I missed address. Caller reports someone pushed him down and stole his money.”

7:09 p.m.  “Confirmed with Tewksbury PD that the incident I tweeted about earlier was not a robbery.”

I scrolled back through Rob’s past tweets and found these two:

March 13 at 9:45 p.m. “Lowell PD switching to their encrypted channel to dispatch a priority call. Please let me know if you spot a large police presence soon.”

March 13 at 10:01 p.m. “The encrypted priority call was for a report of gunshots downtown in the area of Market and Middle streets. It ended up being unfounded.”

How many “unfounded” reports of gunshots do we get in the city? Does reporting them in real time and not waiting to find out if they’ve been substantiated create a false impression of the level of bullets flying through the city? Yes, the initial tweets accurately repeat what was broadcast over the police radio, but are they accurate reporting, especially when the determination of whether an initial report is true or unfounded may take only a few minutes; perhaps an hour or two at most? What’s the hurry?

But just as technology has allowed citizens and the media to monitor and immediately echo police radio calls, technology is allowing the police to curtail that monitoring. The Lowell Police now have the ability to encrypt their radio communications which means no one without the proper radio and decryption device can hear their transmissions. The police have left all their routine radio traffic in the clear but switch to a secure channel for reports of serious criminal activity. This deprives citizens and the media of the ability to hear what’s going on in real time.

Rob Mills has a lengthy article on this issue on the Sun’s website today in which the leadership of the Sun, while acknowledging a police safety concern, also questions whether encrypted radio calls will decrease the accountability to the police to the public.

Lowell Police Chief Bill Taylor maintains that encryption is used for officer safety. The same technology that allows Sun reporters to monitor police activity in real time allows the bad guys to do the same which puts responding police officers at greater risk. The Sun article implies that this may just be a pretense to shut down the public’s “right to know.” While it wouldn’t surprise me if the leadership of the police and the city find this breaking news blackout to be a welcome collateral consequence—I’m sure they’ll be pleased that “unfounded” doesn’t have to lag far behind “report of shots fired” in the media’s crime reporting—if encrypting communications is a legitimate police protection issue—which I think it is—how can the discussion go any further than that? In fact, I might even argue that the time it takes to instruct officers to switch their radios to a secure channel cuts into valuable response time for the most critical situations, so perhaps all police communications should be encrypted.

But the Sun shouldn’t worry. If history is a guide, there is already some UMass Lowell electrical engineering student working on a cell phone app that decrypts encrypted communications. The radio silence will be short-lived.