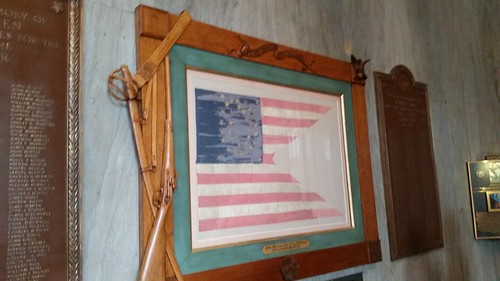 This coming Sunday, March 20, 2016 at 2 p.m. at the National Park Visitor Center at 246 Market Street, Lowell, I will be presenting a Moses Greeley Parker lecture. My topic will be the Solon Perkins flag. Perkins is best known for his service as a Union Cavalry officer in the Civil War, an undertaking that cost him his life when he was killed in action in 1863. The men of his unit commemorated his heroic leadership by presenting his mother with the American flag they had carried in battle throughout the war. In the 1920s, the flag found its way to the Lowell Memorial Auditorium where it was displayed in a place of honor. At some point, the flag disappeared and remained lost until 2014 when an auditorium worker re-discovered it in the building’s basement. The Greater Lowell Veterans Council restored the flag and it has since been returned to the Hall of Flags of the Auditorium.

While the story of the flag is fascinating in itself, so is Perkins life, both before and during the war. An 1853 graduate of Lowell High School, Perkins immediately went to work for a firm that represented the interests of Lowell’s textile mills in South America. He lived in Argentina for three years and Chile for two, a full participant in the global empire of cotton.

One Response to Parker Lecture this Sunday: The Solon Perkins Flag