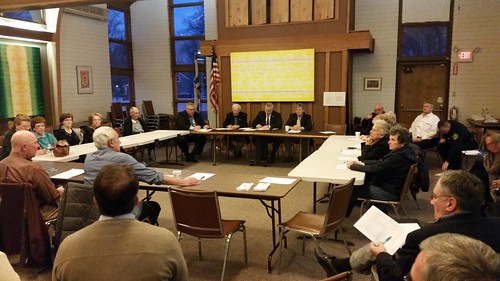 The City Council’s Neighborhood Subcommittee took its meeting on the road last night to Temple Emmanuel on West Forrest Street. The gathering was co-hosted by the Highlands Neighborhood Association which meets regularly at the Temple. The Subcommittee, chaired by Dan Rourke with John Leahy and Bill Samaras as members, plans to hold future meetings in the neighborhoods. This one was well-attended with perhaps 75 local residents in attendance along with most of the city council. Besides the three subcommittee members, also present were Rita Mercier, Corey Belanger, Rodney Elliott, Jim Milinazzo, and Jim Leary. John Leahy explained that Mayor Ed Kennedy had planned to attend but he was spending time with his brand-new grandchild (congratulations on that). Also in attendance were City Manager Kevin Murphy, City Clerk Michael Geary (it was an official subcommittee meeting, after all), and State Representative Rady Mom.

The meeting began with a discussion of the property at the corner of Princeton Blvd and Baldwin Street which has been the subject of some discussion at prior city council meetings. The parcel, once an oil company/gas station, has a new owner who has removed underground oil tanks and is transforming the site into a car repair/used car lot. The slow progress of the renovations and the presence of substantial amounts of aged vehicles and equipment has angered neighbors including former mayor and city councilor Bud Caulfield who has spoken previously at city council meetings and spoke again last night.

City Building Inspector Shaun Shanahan explained that because the work involves environmental issues (previously buried oil tanks) there is a site supervisor who controls the pace of the work. Because properly backfilling such a large excavation takes time to let the proper fill settle properly, Shanahan suggested that the pace of the work, while slow, is not completely out of line with what needs to be done. He did say that based on his investigation, the project should all be completed within 90 days. He also said that he would have difficulty distinguishing what pieces of equipment were needed for the backfill operation, what vehicles were there for repairs, and what was junk. That response was not satisfactory to the neighbors who expressed their displeasure. In the end, councilors suggested to City Manager Kevin Murphy that the city more aggressively investigate the vehicles and equipment lingering on the site.

Shanahan retained the floor as residents fired questions at him about specific properties: Fairfield Street, Westchester, Wedge Street . . . . Shanahan knew the status of every one off the top of his head. Several have active permits with some work being done although not very quickly. The most implacable problems seem to be bank-owned properties that either have foreclosures in process or in the recent pass. [And none of the banks involved are local ones; all are big national banks like Wells Fargo and Deutsche Bank].

The next speaker was Police Superintendent Bill Taylor who shared the news that crime across the board has dropped at least 10% for two years in a row. He cited robbery being down 25% and aggravated assault down 32%. He did say that one type of crime that has risen is shoplifting. He said evidence suggest that the increase in shoplifting coincides with the increase in the number of panhandlers in the city. He said all of that, and so much else, flows directly from substance abuse.

Regarding substance abuse, Taylor praised the legislation signed yesterday by Governor Baker and pointed out all of the steps Lowell has undertaken in response to the epidemic. He explained that the police are following a two-part strategy. Part one targets higher level drug dealers, those who bring illegal drugs into the community. But part two involves trying to help the user get help. Taylor said that locking up someone with an addiction for a long period of time is not the solution to that problem.

Two other points Taylor made was the dramatic drop in the amount of firearms-related crimes (down 32%) and the fact that here were no homicides in the city in all of 2015. He also praised the new public safety grant writing team which has brought in more than $5 million in grants to the city police and fire departments.

Finally, Taylor attributed much of these improvements to the increase in the number of police officers in the department. He said when he became superintendent, there were 228 officers; today there are 245; and by next fiscal year he hopes to have 250, which he thinks is the proper number for the city. He thanked city councilors for providing the funding for this increase in staffing.

City Manager Murphy closed the meeting by reminding everyone that there’s a big difference in the Highlands now from two years ago when nighttime fireworks and too frequent gunshots were are regular occurrence. With that, a very successful meeting came to an end.