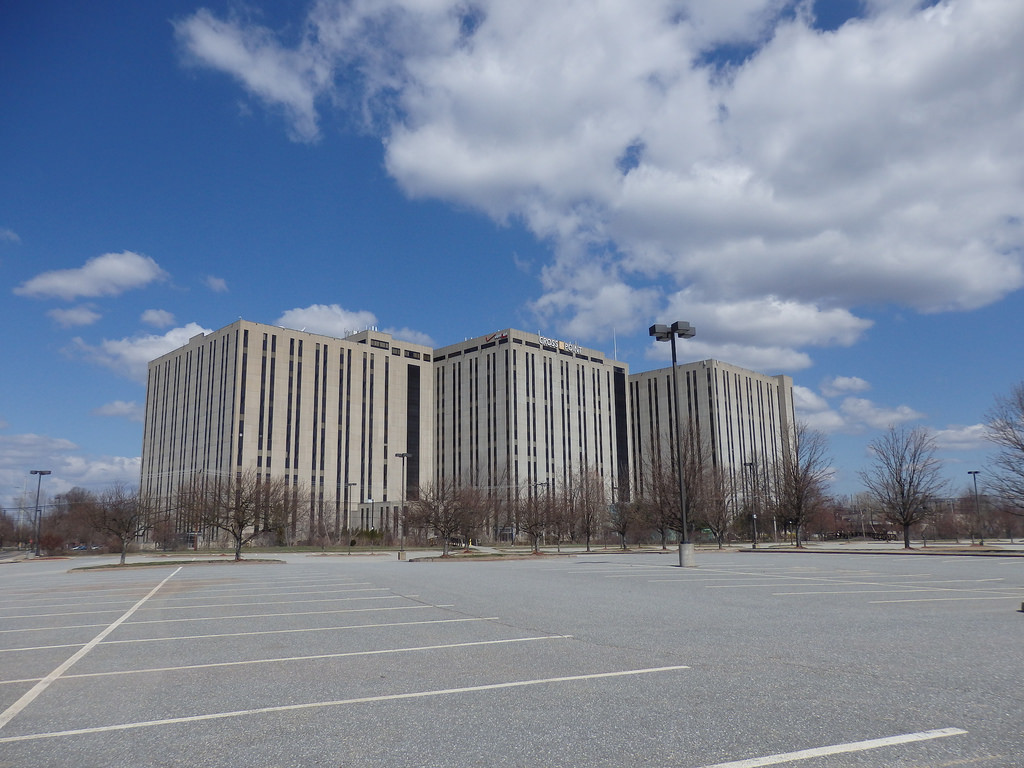 The big news in Lowell this week was the announcement on Monday that technology company Kronos will be moving from Chelmsford to Lowell to occupy an entire tower at Cross Point (See Kronos press release). Everyone has heard of Kronos, a technology company that makes software that manages all manner of Human Resources tasks for companies around the world.

Kronos is the global leader in delivering workforce management solutions in the cloud. Tens of thousands of organizations in more than 100 countries – including more than half of the Fortune 1000® – use Kronos to control labor costs, minimize compliance risk, and improve workforce productivity. Learn more about Kronos industry-specific time and attendance, scheduling, absence management, HR and payroll, hiring, and labor analytics applications at www.kronos.com. Kronos: Workforce Innovation That Works™.

Kronos and Anchor Line Properties, which has owned Cross Point since 2014, will invest $40 to modernize the 400,000 square foot tower. The work is to be completed and Kronos will move in during the summer of 2017. 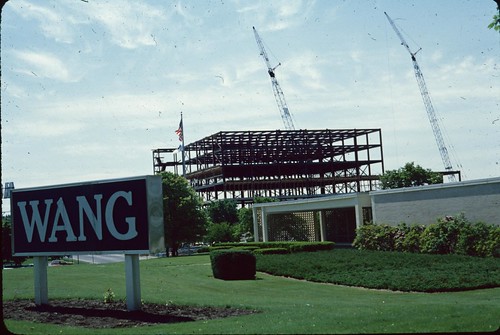 Wang Tower under construction in 1980. Photo by Ray Houde

This adds another chapter to the fascinating story of the office towers built in the 1980s at the intersection of Routes 3 and 495 by computer maker Wang Labs. Construction of the first tower, shown above, began in 1980 and the other two soon followed. By the early 1990s, the towers, assessed by the city for $60 million, housed 4,500 Wang workers, many of them Lowell residents. But the death of founder An Wang and changes in the computer industry brought hard times to Wang. In 1994, the three towers were sold in a foreclosure auction for just $525,000.

Fortunately, the new owners were energetic and innovative individuals. They courted NYNEX as a tenant but the telephone company was hesitant to commit due to questions about the financial resources of the new owners (“Who are these guys?”). At that point, the Lowell City Council stepped in and guaranteed the performance of the building owners (i.e., the payment of real estate taxes, utilities, etc.). That was enough for NYNEX and the lease was signed. Other companies soon followed and all three towers quickly filled with tenants. The city never had to pay a dime towards the guarantee, and in 1998, the buildings were worth $110 million.
So congratulations to Kronos, to the owners of Cross Point, and to Lowell city government. Companies like Kronos, which could relocate to any community in America, don’t move to cities like Lowell unless there is a respect for and confidence in local government.

There are other positive signs that the city continues to move forward. On Monday, the Conservation Commission will take up a Notice of Intent related to the Concord River Greenway, the recreational walkway along the banks of the Concord River that will extend from the Lowell Memorial Auditorium on East Merrimack Street to Lowell Cemetery on Lawrence Street. This project is to conduct “exploratory borings” for three bridges and a boardwalk associated with Phases 2B and 3 of the Greenway. Much of the Greenway is already complete, but due to various obstacles on either side of the Concord, the Greenway must cross the river several times to take advantage of available rights of way. Once complete, the Greenway will be a great asset for the city. Coming before the Conservation Commission now is a positive sign that the final phases of this project will soon be underway.

In another bridge-related matter, on Tuesday, the city council will vote to authorize the city manager to apply for, accept, and spend a $3 million federal Economic Development Administration grant that would fund the construction of the “Signature Bridge” which would cross the Pawtucket Canal in the middle of the Hamilton Canal District. This money would be combined with the $4.7 million Mass Works grant the city received last fall. Together, they will allow for the construction of key infrastructure pieces necessary to the development of the full Hamilton Canal District to move forward.

I spent all day yesterday at Mill No. 5 in the company of many talented writers and poets from Lowell including Paul Marion, Steve O’Connor, Matt Miller, Michael Casey, Sean Casey, Bob Forrant, Jack Dacey, Masada Jones, Steve Anstey, Jacqueline Malone, Matthew Medsger, David Moloney, Al Bouchard, Sarah Masse and Freeverse. This Lowell Author Round-Up was all organized by Sean Thibodeau and the Pollard Memorial Library. When you think of arts and culture in Lowell today, visual artists deservedly receive much of the attention, but there is also some great literature and poetry being produced in the city. With events like yesterday’s Pulp and Paper at Mill No. 5 and with the recent opening of the new Hypertext Bookstore Café on Merrimack Street, the profile of those who work with words should be enhanced.

Mill No. 5 is also a symbol of the great potential of the Hamilton Canal District. With Mill No. 5, the Lowell Community Health Center, the Appleton Apartments, and the Lowell Community Charter Public School, that end of Jackson Street is always bustling these days. With construction of the seven-story Judicial Center set to begin this summer, the activity level will only increase.

Two weeks ago, Councilor Rodney Elliott filed a motion asking that the council discuss the possibility of changing to some type of district council representation instead of the current all-at-large system. None of the other councilors seconded that motion and so it died on the floor.

Last week, Councilor Rita Mercier spoke on a point of personal privilege. Here are my notes from that part of the council meeting:

Councilor Rita Mercier takes a point of personal privilege and apologizes to Councilor Elliott for failing to second his motion last week to explore district councilors. She said she felt very badly about not doing it after it had happened and wanted to publicly apologize.

Councilor Mercier may have regretted not seconding the motion, but she didn’t urge Councilor Elliott to refile it at a future meeting. Even if he did and was to receive a second, it’s unlikely that motion would pass given the fact that no one would second it.

In response to that failure to obtain a second for the district councilor motion, here’s what I wrote last Sunday:

I’ve come to believe that the city would probably be better off with some mix of district and at large representation on the city council. I’ve also said that it’s unlikely to happen because those who hold power under the present system, both electorally but especially influence-wise, are happy with the way things are and would be unlikely to support any structural change. Based on the lack of a second on Tuesday night, my prediction seems pretty accurate.

Let me expand my comment on this issue: From an equity and fairness perspective, I think having a council that’s more geographically, racially, and ethnically reflective of the city’s population would be a good thing although mathematically, it shouldn’t take upending the city’s form of government to make that happen.

A couple of years ago, with the assistance of some members of the city’s Cambodian community, I went through the 54,000 names of registered voters in Lowell and found that nearly 11,000 of them had Southeast Asian surnames. In the 2015 city election, just 10,714 people voted (18%) in the entire city. The top finisher in the council race received 6,228 votes; the ninth place finisher got 4,158. So if just half of the registered voters in the city with Southeast Asian surnames (1) showed up to vote; and (2) voted for the Cambodian candidates on the ballot, they all would have won. But that didn’t happen. There are probably many reasons why it didn’t happen and I won’t begin to speculate on them. The important thing is that we are a city with the second largest Southeast Asian community in America, and we don’t have a Southeast Asian holding elective office in city government (Rady Mom is a state representative).

Is the solution some kind of initiative petition to change the form of government? I doubt it. If the people who want change had the electoral ability to prevail in such a referendum, they would have already elected a very diverse city council and there wouldn’t be a need to change the system. For that reason, I think the most realistic route for changing the charter would be through the courts. That’s how school desegregation came about in the late 1980s; it was only with the threat of a Federal takeover of the schools that the school committee adopted a desegregation plan.

Whether anyone cares enough about this issue to start a lawsuit is another matter. Things like that happen when there is widespread discontent with government which is not the case now. The council and the city administration are doing a very good job from my perspective. How can you say otherwise when things like Kronos opting to move from Chelmsford to Lowell keep happening?

This is one of the first times I remember Massachusetts gaining national attention in a presidential primary. Perhaps that’s because we’ve had so many presidential candidates from this state – Mike Dukakis, Paul Tsongas, John Kerry, Mitt Romney. Whatever the reason, the state received many mentions this year.

n a head-to-head, liberal vs conservative election, I do think the liberal would win, but not by more than 55% to 45%, probably much closer. And that 45% aren’t just a little bit conservative, many are far to the right on many of the big issues of the day. So when you have an election just among that 45%, it should come as no surprise that Trump would do so well.

If you’re looking towards November and wondering who might prevail in Lowell in a Hillary Clinton vs Donald Trump showdown at the top of the ticket (that’s who I think the nominees will be right now), here are some past election results that might help shape you prediction:

One figure I’d be interested to see is how many voters who were registered as Democrats changed to unenrolled or Republican in time to vote for Mr. Trump in this election. Just prior to the election, Secretary of State Bill Galvin reported that 20,000 people statewide had made that switch.