After our weekend deep freeze and yesterday’s tropical rain, the bright sunshine and 40-something temperatures today convinced me to take a lunchtime walk downtown. My first stop was 200 Central Street which had put on an unauthorized pre-Winterfest light show last night when water infiltrated an underground electrical fixture and caused a series of electrical explosions that needed National Grid and a multi-hour power outage for downtown to fix. Today at noon there were no signs of damage above ground. 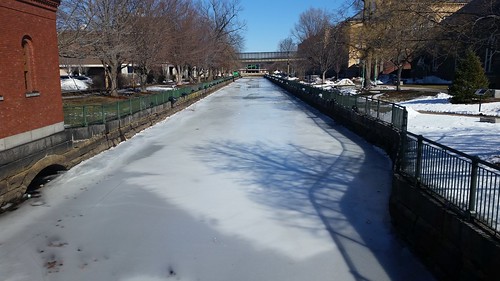 The next stop was Lucy Larcom Park, the prime venue for this weekend’s Winterfest. Other than a dozen green-colored 55-gallon trash cans and two piles of steel crowd-control fencing that were piled in a corner, there was not much evidence of festival preparations. The light fixtures are clearly evident, mounted at ground level on the canal-side of every other support post for the fence that runs the length of either side of the canal. The surface of the water was frozen which, if it persists until Friday night’s kickoff, will enhance the lightshow.

Walking down Merrimack Street, I grabbed a slice of pizza at what used to be Eileen’s Pizzeria & Grill but is now Fabiano’s Pizzeria & Café. All pizza tastes good to me, so their thin-crust cheese slice fell into that category. Fabiano’s has a fairly elaborate menu, aspiring more to the café than the pizzeria side of its name. It is also open at 8 a.m. for breakfast.

Reaching to corner of John Street, I was disappointed that the long-awaited Hyper-Text Bookstore Café has not yet opened. There is hope, though. Bookshelves filled with books were visible from the sidewalk as were eight or ten café tables on the John Street side. Two people were working inside, too. I’m guessing there’s a push to open in time for this weekend’s Winterfest. 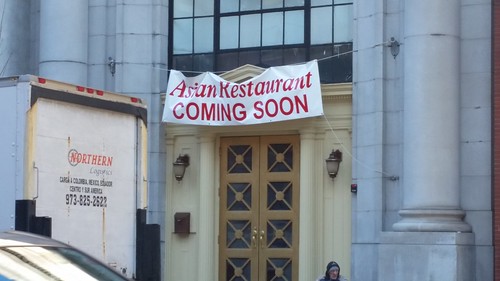 Further along, the long-vacant Union National Bank building now has a sign that announces “Asian Restaurant Coming Soon.” As someone who made many trips into that building when it was a bank, I recall that it has the upscale ambiance suitable for a fine restaurant, so hopefully its future occupant hits that level and achieves some success.

Throughout my circuit of downtown, people I encountered all asked me if I knew why traffic was so bad this morning. By noontime, it seemed more like a busy day in a vibrant downtown than a major traffic jam, but the cars really seemed to back up a few times because of Prescott Street. I’m not sure if that was because of the construction on Bridge Street across the river or from some other cause, but people certainly were annoyed (“It took me 30 minutes to get from Andover Street to Central Street!” was one complaint I heard).

Reading recently that the LRTA’s cell phone app that allows riders to track the whereabouts of buses got me thinking about a similar kind of app that might have some use in the city. I’m thinking something like a traffic congestion app that allows someone who is about to make a trip to or through downtown to log-in and see the state of traffic congestion. Maybe this would cause some people to avoid the trip, but maybe others would find alternate means of transportation (i.e., park on the outskirts of downtown and then walk the rest of the way) and thereby reduce car congestion in that way.

One final comment: many of the downtown intersections that I’ve previously labeled as hazardous to pedestrians – Middlesex and Central and Market/Central/Prescott are two – seemed safer and more rational when crossing today. The attention that the city’s traffic people have paid to pedestrian crossing lights seems to have paid off. I don’t want to sound ungrateful, but maybe now they can focus on Dutton Street and the Lord Overpass.

4 Responses to Wednesday in Downtown