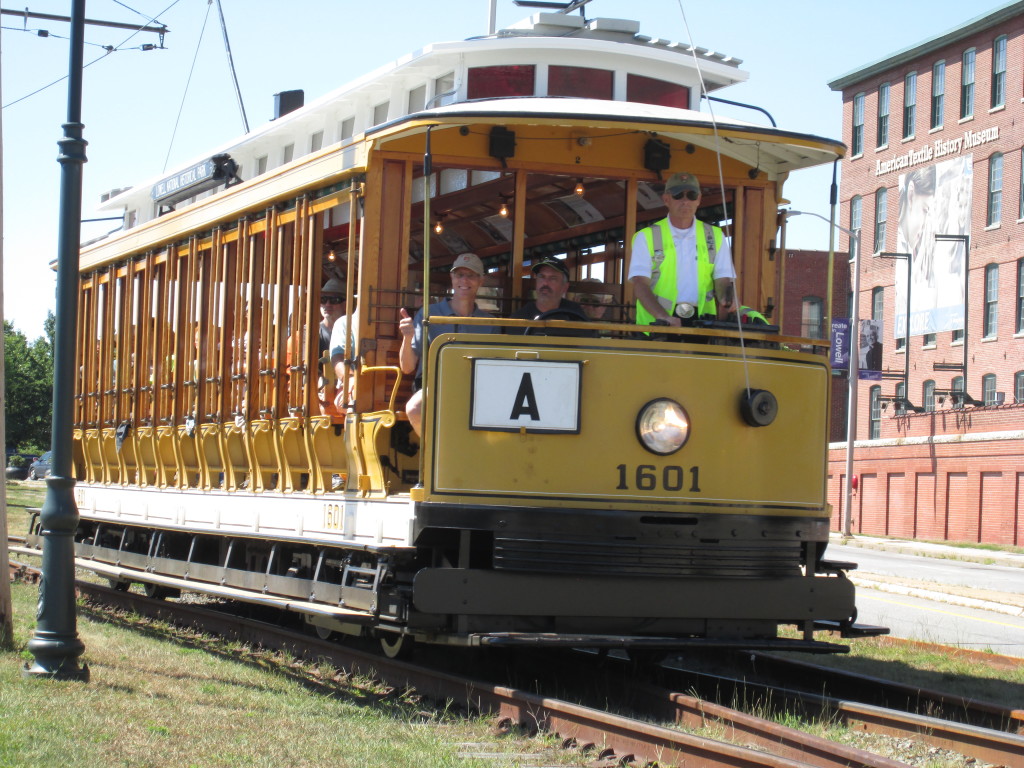 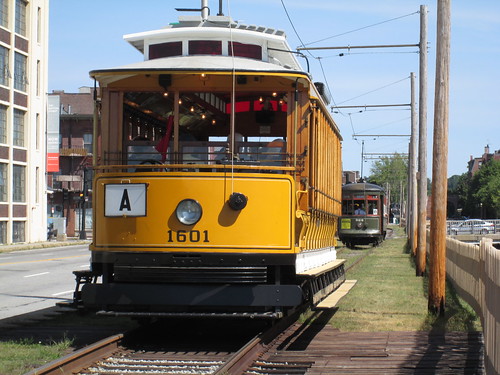 For nearly a decade, there has been talk of a greatly expanded trolley system for Lowell. Conceptually, the project would expand the National Park’s existing 1.5 mile trolley system to connect the Gallagher Terminal with downtown and with UMass Lowell campus centers. A consortium of local partners including the city, UMass Lowell, Lowell National Historical Park, the LRTA, and others, has met for years in pursuit of this objective.

A memo in this week’s city council packet, written in response to a motion asking about the status of the trolley expansion, makes it clear that the project has been taken off life support. In making the case to abandon the trolley project, the memo makes it clear that the cost – $100 million to build and $3 million per year to operate – greatly exceeded the capacity or the willingness of the partners to undertake the effort.

There is a $1.5 million federal grant from several years ago that was appropriated for the trolley system but not yet used. The partners will work with Congresswoman Tsongas to allow for the repurposing of that grant so that it can be spent on other “multi-modal options” for connecting the Gallagher Terminal to downtown and the UMass Lowell campuses in a way that is compatible with “the city’s current projects at South Common and reconstruction of the Lord Overpass.”

While there aren’t many motions on this week’s council agenda, there are several “motion responses” of substance in addition to the trolley obituary. In reply to a request for an update on the “Plain Street Realignment,” a memo from the city’s Division of Planning and Development states that the final design for that project, part of the 2013 Ayers City Industrial Park (ACIP) Urban Revitalization and Renewal Plan, should be finished this spring and that construction would be able to begin this summer.

Here’s what this is all about: In a stretch of about 50 yards of Plain Street, from the Lowell Connector to the entrance to Target, there are three major intersections but only two traffic lights. One set of lights controls the ramps on the inbound side of the Lowell Connector where they intersect with Plain Street; the other set of lights controls the Plain Street entrance to that Target shopping plaza. Squeezed between those two lights is the intersection of Tanner and Plain Streets. The short distance between these two traffic lights and the resulting traffic backups make access to and from Tanner Street very difficult.

The Tanner Street realignment plan will move that part of Tanner Street that touches Plain Street further to the south (away from the Connector) so that it intersects with Plain Street directly opposite the entrance to Target. This will allow the pre-existing traffic light at that spot to control access to Tanner Street as well as to Target. Tanner Street now runs alongside Lowell Car Wash. This realignment will move it to the other side of Lowell Car Wash so it runs between the car wash and the VFW property. I believe it will require the acquisition of a portion of the VFW property either by purchase or by eminent domain, but that property has been for sale for some time, so presumably the city is already negotiating this with the land owners.

The memo makes mention of obtaining the release of a $250,000 state earmark to pay for the rest of the planning but it makes no mention of the funding for the construction and land takings for the project. So while the job might be ready to begin this summer, it might have to wait until money to pay for it becomes available.

A third memo in the council packet is from Police Superintendent Taylor. It addresses two public safety issues: the status of the Shot Spotter acoustic gunfire detection system for which the council appropriated $500,000 in capital funds last year; and an assessment of increased video surveillance capabilities. Taylor explains that the police have thoroughly tested the Shot Spotter system which utilizes multiple directional microphones to detect gunshots which would then allow police to be rapidly dispatched to the location of the shooting. While LPD found the system would work as advertised, it would be leased for $165,000 per year with no option to purchase it outright. He felt that with the incidence of fire arms related crimes down significantly this year from last, the annual cost of the Shot Spotter system plus its limited utility (it detects only gunshots) would not make it the most effective use of the appropriated funds.

Instead, Taylor makes the case for increased surveillance cameras. He proposes using $350,000 of the appropriation to purchase and install up to 48 cameras in the downtown, in city parks, and in “hot spots” around the city. His memo makes a strong case that video cameras are both a strong deterrent to crime – everyone knows they are there – while also providing important evidence in solving and prosecuting crimes that do happen.

The memo seems to invite the council to reallocate the already appropriated capital funds from the Shot Spotter system to the video camera solution. 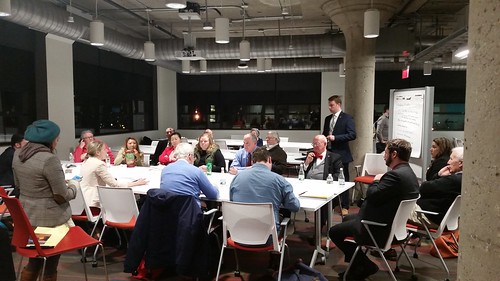 Lighting Up the Canals

“Lowell: The Next Initiative” is the name used for the effort launched by Fred Faust and Paul Marion of the Lowell Heritage Partnership (LHP), in collaboration with the City Manager’s office and City Council and with support from Enterprise Bank, to better utilize Lowell’s canals for cultural, recreational, and economic development purposes, held a community meeting this past Thursday at the UMass Lowell Innovation Hub at 110 Canal Street. Those in attendance spent most of the night in smaller working groups on tourism; economic development; and arts, culture and heritage. The next meeting – which is open to everyone – will be held on March 10 (I assume in the same place and at the same time) and then a major gathering will occur in April at the UMass Lowell Inn & Conference Center. That will be a community-wide working group that will discuss the ideas that emerge from the earlier sessions. On April 7, the kick off of this year’s First Thursdays downtown art and business series will feature all the First Thursday events and will culminate with a lighting up of the canals at Lower Locks, between the UMass Lowell Inn and Conference Center and main building of Middlesex Community College. Event partners include the Arts League of Lowell, LHP, UML, MCC, Lowell National Historical Park, Earth Day Committee, Cultural Organization of Lowell, and others.

The first opportunity for people to experience the lighting of the Lowell canals will occur this coming Friday at the opening of Winterfest which extends into Saturday. This year’s Winterfest will be based on Lucy Larcom Park and the highlight will be the newly installed lights shining on the adjacent Merrimack Canal. Check out the city’s Winterfest website for more information and for a complete schedule.

The Lowell Sun’s Rick Sobey reported on Chris Scott’s Column blog earlier this week that the Lowell Judicial Center continues to move forward. DiMeo Construction Company of Providence has been hired as the construction manager and that a ground breaking is supposed to occur this fall. The expected date of completion is now the spring of 2019.

I’ve been told by people who were at this week’s press conference that at seven stories in height, the judicial center will tower above everything else in the area (in a good way). The external construction materials will be granite, glass, and metal, which will further distinguish the building from the red brick mills that sit on either side of Jackson Street.

The Conservation Commission this week quietly ruled that the intended site of for parking tour buses visiting Lowell National Historic Park on LRTA-owned land on YMCA Drive does not fall under the state’s Conservation Act because it is not a natural wetland. You may recall that back in December, some on the Conservation Commission were concerned that a past ruling regarding an adjacent condominium complex held otherwise. Seeking consistency, or at least trying to avoid a case of disparate treatment, the commission asked the city’s Planning Department to contact those in charge of the condominium association and obtain their input on this project. That happened and now the project can project, which is a critical part of the overall Hamilton Canal development, can proceed.

The city council will also vote this Tuesday to authorize the borrowing of $2.6 million by the city for the repair of the various canal bridges that are to be granted to the city from Enel Green Power North America. The overall cost of this project is $16.7 million. The city has received a federal TIGER grant of $13.4 million, however, a requirement of that grant is that the city contribute approximately $2.5 million in matching funds. The city’s portion will pay for design and pre-construction expenses, so the money must be raised now. The memo from the city manager in support of this does state that the full $2.6 million will not have to be borrowed.
It’s my understanding that the design work for these bridges will be done in 2017 and that construction will begin in 2018.

The death of Supreme Court Justice Antonin Scalia yesterday sent shock waves through the political world and the immediate controversy over the procedure for selecting his successor is a reminder that elections have consequences. I’ve said that several times this past week in relation to the Massachusetts Supreme Judicial Court which suddenly had three of its seven members announce their retirements. With two of the remaining justices a year away from the mandatory retirement age of 70, Governor Baker will have appointed a majority of that court before his first term even ends. Of course, many past members of the SJC and the U.S. Supreme Court who have been condemned as “liberal activist judges” were appointed by Republican governors and presidents. That just makes the wait for Baker to make his nominations all the more interesting.
Finally, it was -13 degrees this morning. Happy Valentine’s Day.