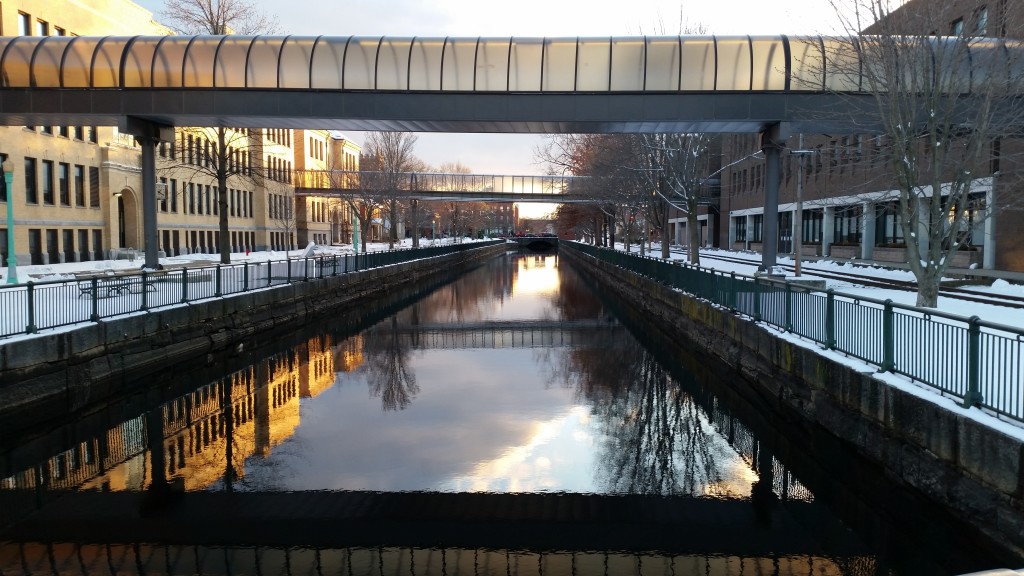 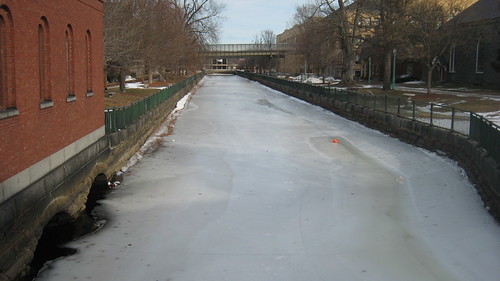 At Tuesday’s meeting, the city council authorized the expenditure of $110,000 on LED lights to illuminate the Merrimack Canal along Lucy Larcom Park. Here’s some of what was said during the council meeting:

Manager Murphy says Lucy Larcom Park has been underutilized. Winterfest will be concentrated on Lucy Larcom Park with small food tents, fire pits, an ice bar, and illumination of the canal which will light up the ice and the trees. The lights will be operational all year long: red, white and blue on Fourth of July and green on St. Patrick’s Day, for example. The city’s ultimate goal is to illuminate all of the canals.

Councilor Samaras, who I believe has been one of the driving forces of this effort behind-the-scenes, also mentioned that the Lowell Heritage Partnership is seeking private and corporate contributions to help expand this.

This is the kind of unifying effort that can really boost the city. From large institutions like UMass Lowell and Middlesex Community College, to small businesses and building owners, everyone can do their part. The city should continue to focus on the canals and public spaces, but let others light up the spaces and places in their own orbits. The owners of Cross Point already illuminate that building with an evolving palate of colors and we all know about the Wannalancit Mills Christmas tree. Who will be next?

The early part of Tuesday’s council meeting featured a half dozen residents of Lowell voicing their opposition to the city’s new policy governing the issuance of gun licenses. This is not a topic that I’ve followed very closely but my sense of the issues is this: The issuance of a gun license is solely up to the police chief of the town in which you live (although there might be some kind of judicial appeal process); that there are three classes of licenses, one that allows you to have a gun in your home (for self-defense, presumably), another that allows a gun for sporting purposes like target shooting or hunting, and a third type, which is “unlimited,” allowing a gun-owner to carry a gun anywhere it’s not otherwise prohibited (like in a courthouse). My further understanding is that for the past thirty years, whoever was the Lowell police chief refrained from issuing any of these unlimited licenses except in very isolated circumstances. Now, in response to the strong desires of the proponents of carrying guns, Lowell police chief Bill Taylor has tried to craft a policy that provides a pathway to an unlimited license for more gun-owners.

As was clear from the public comments at the meeting, the gun proponents are not satisfied with the new policy and described it in various ways as illegal, unconstitutional, dictatorial, and irrational. When Chief Taylor was granted the opportunity to respond, he explained the basis of each part of the policy, including the elements most complained of by the speakers. All seemed rational and in furtherance of his objective of keeping the peace and safeguarding the majority of Lowell’s residents. Although the council has no legal say in this matter, several councilors spoke. I was particularly impressed with Councilors John Leahy and Corey Belanger who, in the face of an angry crowd, made it clear that they supported the police chief. Others may have done the same thing, but Leahy and Belanger were respectful but blunt in addressing the gun proponents.

As the Chief was patiently explaining his reasons for each element of the policy, it was clear to me that there was a rational basis to each of them. I was reminded of the incident last summer when a small variety store on Liberty Street was robbed by two men. I don’t believe that they showed weapons, but they did assault the store owner. When they fled, the owner grabbed his licensed firearm and followed. The store owner fired a couple of rounds in the direction they had fled, striking the house across the street which was occupied by a family with small children. Fortunately, no one in the house was harmed. The training and background investigation requirements the chief seeks to incorporate into the new policy seem relevant to reducing the likelihood that those issued gun licenses by the city will discharge their weapons in a similar irresponsible and dangerous-to-the-public manner.

One theme repeated by the gun proponents was the danger they felt living in Lowell. One said he refrained from shopping within the city because he was prohibited from carrying his gun into local stores. Several said that the police were powerless to protect them so they had to be armed to be able to protect themselves. One speaker said that the incidence of crime in Belvidere, the home neighborhood to two-thirds of the councilors, was much lower than in other parts of the city, so the councilors would not understand the threats faced by residents in other neighborhoods of the city.

Is that an accurate assessment of life in Lowell? Crime statistics might be down overall but if your block is the site of frequent crimes of violence, statistics offer little comfort. Not long ago I attended a meeting of the Highlands neighborhood organization. The Lowell police representative at the meeting reviewed the various crimes that occurred in the neighborhood since the last meeting of the group. I was impressed with the level of detail that was shared. Rather than limit such information sharing to relatively small groups of neighborhood activists, perhaps the city should share a detailed account of all crimes in the city in a very public way. If there are a lot of them tightly grouped in the same neighborhoods, everyone else in the city would see that those neighborhoods need a greater share of resources than they now receive. On the other hand, if crime is spread evenly among several neighborhoods in numbers that should be smaller but are at least manageable, perhaps some people are exaggerating the threat.

Other than people who earn a living plowing snow, I know of no one who was disappointed that this historic East Coast snowstorm went out to sea before striking us. Other than a few flakes swirling in the wind yesterday afternoon, I saw no snow. My son Andrew, who now lives in Arlington, Virginia, across the Potomac from Washington, D.C., had a different experience. The snow there began Friday afternoon and was still falling when we spoke with him yesterday afternoon. He said that how quickly that region recovers will be a function of how quickly the Metro system can resume operations (it is closed through the weekend). I guess we’re not the only ones with a public transit system that doesn’t do well in the snow. 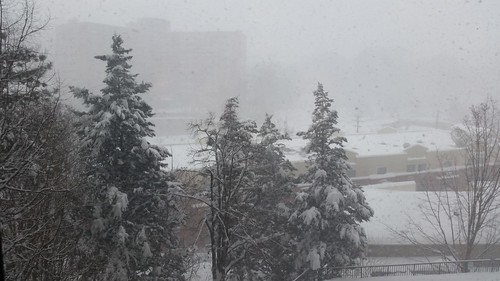 Arlington, Virginia at height of storm. Photo by Andrew Howe