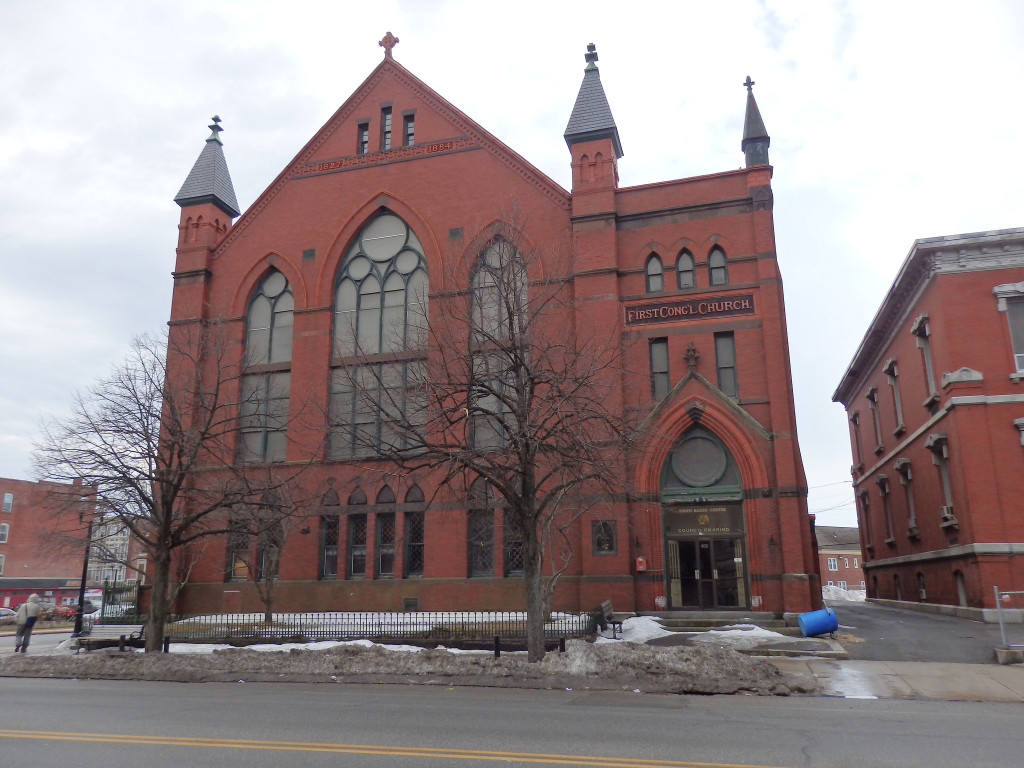 Tuesday night the city council unanimously voted to sell the Smith Baker Center to the Coalition for a Better Acre (CBA) for $300,000. This is a big deal because without major renovations in the near future, the prominently-placed building will suffer the same fate as another unused church, St. Peter’s on Gorham Street – demolition by neglect.

CBA is a great entity to take on this project. It is locally-based with its headquarters just up the street. And CBA has a great track record of undertaking and completing big projects such as the Gorham Street Apartments which were constructed last year in the midst of one of our snowiest winters on record.

Back in April, CBA held a public meeting to gain community input on its proposal. I wrote a report on that meeting, but here’s what was said about the organization’s vision for the building:

Yun-Ju Choi, the Executive Director of CBA, explained that the city of Lowell has issued a Request for Proposals for the Smith Baker Center with a response deadline of June 10, 2015.  CBA is interested in submitting a proposal with a general idea of retaining the large second floor auditorium as a performance space that could also be used for community meetings, movie screenings and other similar events.  In the CBA’s concept, the first floor would be used to help fulfill the CBA’s mission of helping people become self-sufficient.  Ms. Choi also mentioned that she would like to brand the space with the name of Jack Kerouac for a number of reasons including the importance of Lowell embracing one of the city’s most famous people and because of the enhanced national and international fund raising opportunities inherent in anything related to Jack Kerouac.  She added that she has had preliminary discussions with representatives of the Kerouac estate regarding this possibility.

Thanks to UMass Lowell, the “Lowell Cultural Resources Inventory” report on this building is available online. Constructed in 1884 as the First Congregational Church to replace an earlier church built on the same site in 1827, the building sits at the corner of Merrimack Street and Cardinal O’Connell Parkway, just across from City Hall and the city library. The architectural firm that constructed the building, Merrill and Cutler, also designed City Hall, the Central Firehouse (now Fuse Bistro), and the Howe Building (no relation) in Kearney Square. The 1884 version of the church cost $42,000 to build.

In 1968, the First Congregational Church merged with Christ Church United on East Merrimack Street. At that time, the building became the Lowell Senior Center and was renamed for the Rev. Smith Baker, the longtime pastor of the First Congregational Church. The building was sold to the city of Lowell in 1975 by Christ Church United for $85,000. It continued to be used as the Senior Center until the Council on Aging moved to its current location at Broadway and Fletcher in 2003.

While the building was under city control, the upper floor, which resembled an auditorium more than a church, hosted talks by John Updike, Maya Angelou, Allen Ginsberg, and others. Since the senior center moved out, however, the building has fallen into serious disrepair which is perhaps the primary reason the city received no responses to its last request for proposals for the building back in 2011.

One question sure to arise is Who was Smith Baker? According to A genealogy of Eber and Lydia Smith Baker of Marion, Ohio, and their descendants by Elwood Thomas Baker (1909), Smith (that is his first name):

Espoused the cause of religion, like so many of his forefathers. He graduated at Bangor Theological Seminary in 1860, preached in Easton, Me., till 1870, when he was called to the First Church in Lowell, Mass. He continued here twenty years and in 1890 was called to the Park Avenue Church at Minneapolis, Minn. In 1894 he received a call from the Maverick Church in Boston, and returned to the east. In 1897 he was called to the Williston Church at Portland, Me. He resigned in 1908 and now resides at Lowell.

Rev. Baker was also on the committee that helped choose the design of the Pollard Memorial Library which was originally called “Memorial Hall” until it was renamed for longtime city councilor and mayor Samuel Pollard in the early 1980s.

When and why the First Congregational Church was renamed the Smith Baker Center is a question that should be answered, but it looks like that won’t happen today.

The period of American history that interests me most is the late 19th/early 20th century, mainly because that was the time of transition to the modern era when things like electricity, in-door plumbing, and safe drinking water became parts of everyday life. Today, we take those things for granted, especially the water. For millennia, water-borne illnesses, often fatal, were the constant companion of civilization. As a longtime consumer of Lowell tap water, I am delighted with its taste, convenience, and quality.

The news from Flint, Michigan, makes me appreciate our water system even more. As reported in yesterday’s New York Times (“Anger and Scrutiny Grow Over Poisoned Water in Michigan City”), the 100,000 residents of Flint are unable to drink, cook, or bath with the city’s tap water because of contamination, mostly high levels of lead. The problem has existed since 2014 when the city’s state-appointed receiver switched from Detroit’s water supply to drawing water from the Flint River. In the face of immediate complaints, government officials “not only ignored complaints about the smell, taste and color of the water, but also lied about lead levels and tried to conceal evidence.” It was only last week that the true extent of the problem was revealed. There’s no telling how many people have been harmed by consuming tainted water for more than a year.

There is in America today a widely-held disdain for government at all levels that is fed, hypocritically, by many politicians and echoed by many media outlets. That negative attitude has consequences. If people come to believe that government is incapable of working, it will not work. Unfortunately, government and those who work in it, too often provide evidence to support that attitude by poor performance, poor attitude, and too much “crony capitalism.” For that reason, it’s important for us to highlight the times when government does what it’s supposed to do which is to work reliably and well. So when you turn on your coffee-maker this morning, remember that the water you are using did not magically become safe to drink – someone in government made that happen.

Councilors Rita Mercier and Corey Belanger have filed a motion for this Tuesday’s meeting to request that the state legislature alter the method of electing councilors by raising the number of candidates needed to hold a preliminary election from 19 to 25 and the number of nomination signatures needed to appear on the ballot from 50 to 150. I’m ambivalent about this. On one hand, I don’t think it’s a good idea to tinker with the mechanics of elections. On the other hand, I don’t see either of these proposals as a threat to local democracy.

Increasing the number of candidates needed to trigger a preliminary election is probably a good idea. For the past two decades, we seem to hover right around that 18-candidate number, some years having fewer, other years having a few more. Whenever we have 19, 20, or 21 candidates, everyone agonizes over the cost ($70,000 seems the current figure) to hold a preliminary election to eliminate just one, two, or three candidates. That seems like a lot of money for that marginal outcome.

As to the question of whether a preliminary elections benefits incumbents more than challengers, there’s no way to quantify that. My opinion, though not strongly held, is that a preliminary tends to benefit incumbents more than challengers, mostly because it gives an incumbent a warning if he or she has lost favor with the voters. A slide in the preliminary polls is a wakeup call that can be salvaged in the weeks leading up to the general election. Without that preview, there’s a greater chance of a challenger picking-off an unexpectedly weak incumbent in a one-and-only general election.

That said, I do think the city would be better off with a more radical transformation of our system of government to one that blended district and at-large city councilors, perhaps with staggered terms of longer time. That’s unlikely to happen because the very people who hold power under our current system would have to make that change. Since that change would dilute the political power of those who hold it now (the current councilors, their closest supporters, and the 10 percent of city residents who vote in local elections), they are unlikely to support such a change. Because such a substantial change to the city charter is so unlikely to happen, I tend not to support efforts to make such a change. Such efforts are destined to fail, and they just divert resources from trying to make the current system better by getting more people interested and involved in local government.

One way to improve the current system, in my opinion, is to raise the salaries paid to members of the city council and school committee. Consequently, I commend Mayor Kennedy for filing a motion this week to “consider salary adjustments for members of the City Council and School Committee.” I don’t know what the mayor has in mind, but I do know that councilors and school committee members are grossly underpaid for the amount of time they devote to their offices. Besides the issue of equity, however, there is a more important issue of incentive.

People often say that fifty years ago there was more public spiritedness. As evidence of that they point to the number of candidates who sought local office. When my dad first ran for the city council in 1965, there were 55 names on the preliminary election ballot. I’m not sure what councilors were paid back then – I think it was $3000 – but I do know that when he was elected, my dad resigned his position as a teacher at Lowell High which then paid $6500 per year (he had his law degree and was able to open his own law office in conjunction with becoming a councilor).

I’ve long maintained that the reason so many people ran for city council fifty years ago is that the salary of a councilor compared favorably with the salaries of many other jobs available to people at the time. That’s how capitalism works. I’m not saying that we need fulltime city councilors, but I am saying that if you pay more, you will attract more candidates (regardless of how many nomination signatures they have to get).