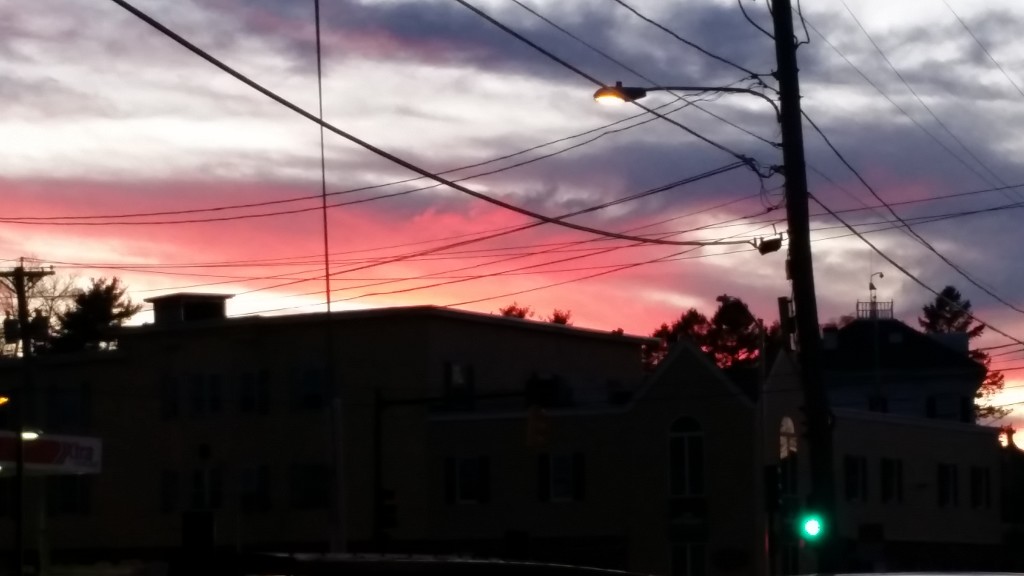 Above photos: Tuesday was the earliest sundown of the year. Since sunrise keeps coming later until December 21, at least it is already staying lighter longer in the day, if only for just a minute or two each day. This photo is from Monday at 4:15 pm (Tuesday was cloudy)

News about the region’s opioid crisis just won’t go away. That’s a good thing unless it fades from view because it is no longer a problem. We can’t afford to have something as harmful to our community swept under the rug. There should be more talk and more action about it, because it’s not getting better. Thus far in 2015, there have been more fatal overdoses in Middlesex County than in any year since records have been kept.

This week, the Globe reported on a meeting at Lowell General Hospital, stating “The city of Lowell is especially hard hit by the opioid crisis, said police Superintendent William Taylor. It sees about one fatal overdose per week and three nonfatal ones per day.”

State Senator Eileen Donoghue took to Facebook to report on efforts made by the legislature:

“There have been 131 fatal heroin-induced overdoses this year in Middlesex County, up 27 percent from 2014. In the Senate, we’ve taken steps to fight the opioid crisis. We required insurance companies to cover up to 14 days of treatment; we criminalized the trafficking of a deadly synthetic opioid; we increased access to overdose-reversing drugs like Narcan; we passed a comprehensive substance abuse prevention bill that holds pharmaceutical companies accountable. But that tragic statistic—131 fatal overdoses in our county—reminds me that there is much more work to be done.”

The Lowell City Council is doing what it can. The Mayor’s Opiate Task Force had its initial meeting before Tuesday’s council meeting. Mayor Elliott reported that the task force had a “good discussion” and that “the police and schools are already doing much.” Also, the council’s Substance Abuse subcommittee will meet this coming Tuesday at 5:30 pm, just before the regular council meeting.

During the council meeting, Corey Belanger and Rita Mercier had a joint motion asking City Manager Murphy to find ways to install sidewalk on Stedman Street so that patients at the HabitOpco treatment center can safely walk there from Westford Street. When this facility was first proposed, there was much opposition to it and the city through its regulatory boards set some conditions before the facility could get its necessary permits to open. One of those provisions was that HabitOpco had to provide transportation from Westford Street to the facility so that patients would not walk on Stedman Street. This Tuesday night, Councilors Mercier said that the city’s requirement that patients be shuttled from Westford Street to the clinic was not a safety measure but just an obstacle intended to keep the clinic from locating there. She said the clinic does important work and the city should work with HabitOpco, especially by installing a sidewalk for pedestrian safety. Councilor Belanger says he has investigated and found that no problems have been attributed to the clinic. He concurs with the need for the sidewalk.

With the holidays approaching, the council is expected to cancel its meetings on December 22 and December 29. That will make this coming meeting on December 15, 2015, the last one for Bill Martin as a city councilor (unless he runs again sometime in the future) and perhaps the last for Rodney Elliott as mayor. It is customary that outgoing councilors be given an opportunity to make departing remarks. Councilor Martin’s should be interesting given his long service on the council.

The agenda packet contains a letter from City Solicitor Christine O’Connor about options available for increasing the number of candidates needed to hold a preliminary election. The letter explains in detail how a charter commission would be chosen. There would be a citywide election. Interested individuals would become candidates by submitting 200 nomination signatures. The top nine finishers in the charter commission election (which would be held at the same time as the regular city election) would form the charter commission. They would take office after the election and, no later than 18 months after their election, issue a recommendation on how the charter should be changed (if at all). That recommendation would then appear on the ballot at the next city election.

There is also an easier way to implement a change like this according to the Solicitor: Get a legislator to file (and the legislature to pass) a bill that made the change in the number of candidates needed to have a preliminary election. Once it passed the legislature, it could take effect at the next city election (or at whatever time designated by the legislation).

School Committee meets on Wednesday, December 16, 2015 at 6:30 pm. Early on the agenda is this item: “Appreciation for the service of School Committee members Rodney Elliott (Mayor & Chair), David J. Conway, James D. Leary, Kimberly A. Scott, and Kristin Ross-Sitcawich.” As I’ve mentioned before, it is rare for so many members of an elected board to all leave at the same time. I usually leave reporting on the School Committee to Amy Bisson, but I might watch this Wednesday’s meeting, at least for the departing remarks from outgoing members.

As someone who drives through Cupples Square everyday I’ve watched with interest the changes being made to the roads that bisect that vibrant shopping district. Pine Street was made one-way inbound and the portion of Westford Street that cuts through the square has been pinched down to provide only enough room for two cars to slowly pass inbound and outbound. This was done by extending the sidewalk on the southern side of Westford Street and filling the captured space with a brick patio which should provide great outdoor seating in the nicer weather. There is also curbside parking throughout and more prominently marked crosswalks. I think this is all a great way to slow down the traffic, make it safer for walkers, and to enhance the businesses in the square. 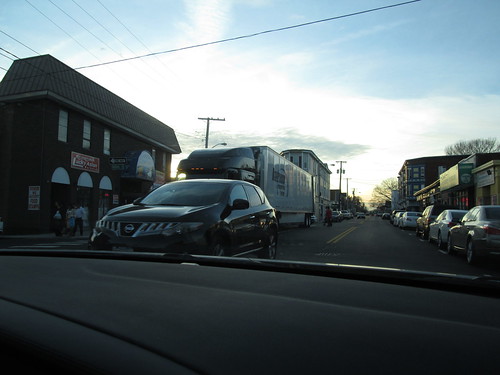 Narrowing the lanes has slowed traffic passing through Cupples Square

One part of the plan has raised some concerns from some of the business owners and that is the city’s installation of parking kiosks in the surface parking lot behind the businesses on the north side of the square. Called the LeRoy Street lot, this has long provided parking for shoppers visiting Cupples Square businesses, but it has often been used for long term parking by neighborhood residents. To force the more rapid turnover of spaces, the city is now charging for parking. 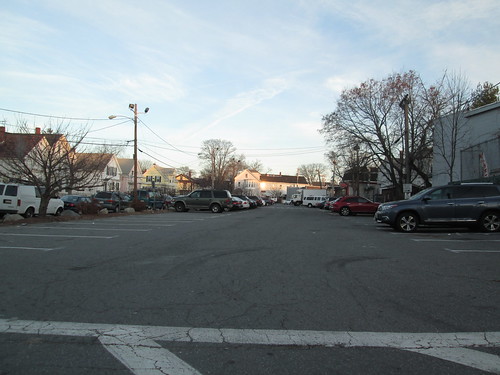 As a result of this, Councilor Samaras filed a motion this past Tuesday night for a report on placement of parking meters in Cupples Square business district. Some business owners registered to speak on the motion. They were opposed to charging for parking in or near Cupples Square. Councilor Samaras asked that the report that will be done in response to this motion explain the rationale behind the parking meters because sometimes when people are able to see the big picture their initial opposition is reversed. However, Councilor Belanger said that Cupples Square is a very successful business district and we should not do anything to disrupt it. We should look at parking very closely. He distinguishes Cupples Square from downtown (where he has supported greater parking enforcement). Other councilors also spoke on the matter with some advocating one hour free parking and others preferring no meters in Cupples Square.

Legal Notices and Due Process

Governor Charlie Baker on Monday proposed legislation that he described as “a total weed whacking” of state rules governing municipal operations and procedures. Matt Murphy wrote an article for Commonwealth Magazine that highlighted a provision that would give cities and towns more control over the number of liquor licenses they could issue. The article also explained how the bill would give municipalities more flexibility in the method they used to inform the public of meetings, hearings and other events that now require a legal notice to be placed in the local newspapers. Not everyone thought that was a good idea, according to Murphy:

The Massachusetts Newspaper Publishers Association quickly pushed back against one provision that would no longer require cities and towns to post notice of town warrants, procurements, and other Open Meeting Law notices in local newspapers, instead allowing them to be posted solely electronically in a venue of the community’s choosing.

“We are opposed to that. Putting the government in charge of publishing legal notices is like putting the fox in charge of the hen house. Publishing notices exclusively on government websites is not a way to get broad word out to the public about what is going on. It tends to reduce transparency,” said the association’s executive director, Robert Ambrogi.

While legal notices are a revenue stream for newspapers, Ambrogi said they are also an important means for engaging the public with less of a risk of disenfranchising groups of people, including minority communities, who might have less access to the internet.

Lt Gov. Karyn Polito cheered with local leaders the idea of “no longer having to spend precious tax dollars on newspaper ads,” and Baker said the newspaper notice law was written before the advent of the Internet.

The objective in the Baker bill is to reduce municipal costs by allowing cities and towns to post legal notices on municipal websites (or elsewhere) instead of paying the high costs of print newspaper advertisements. However, there is an even bigger due process issue and that is whether giving notice of governmental and legal proceedings by mandating publication in the print edition of a newspaper meets the due process requirements of the state and federal Constitutions in 2015.

The term “due process” frequently pops up in the news, but what does it mean? Usually it means fundamental fairness. Was the legal or governmental process fair to the person involved.

Back in 2009, the Maine Supreme Court addressed the fundamental fairness of giving notice of a pending lawsuit to a defendant by publishing a notice in the newspaper. The court held that notice of that type in the age of the internet did not meet that test of fundamental fairness. The case was Gaeth v. Deacon (full opinion here). The American Bar Association Journal reported the case with a story titled “Maine Court Sounds Death Knell for Service by Publication.”

The ABA headline is a little misleading. Even though “service by publication” [in a print newspaper] is an archaic means of giving notice in the internet age, this is all controlled by state law and what state lawmaker is willing to pick a fight with newspaper publishers who derive substantial revenue from the publication of legal notices in their newspapers? My guess is Not many, especially here in Massachusetts, so I doubt that this portion of the bill will go far. Still, I was impressed that Gov. Baker and Lt. Gov. Polito were so vocal in their support of this measure.

The “Lowell Section” of the Governor’s Reform Legislation

The bill also contains a provision that some on Beacon Hill refer to as “the Lowell section.” This portion of the proposed law would give cities and towns greater tools to deal with double telephone poles.

Thanks to the Lowell Historical Society for hosting a program yesterday with me and Paul Marion as the guest speakers. Our topic was Lowell History since World War II and we were able to highlight our books on that topic (Mill Power by Paul and Lowell: Images of Modern America by me). 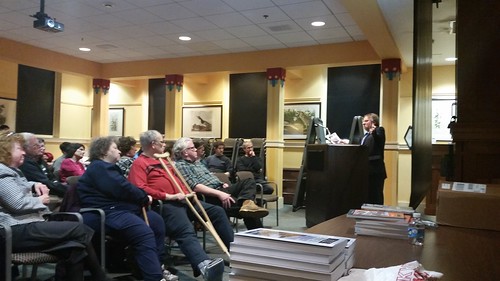