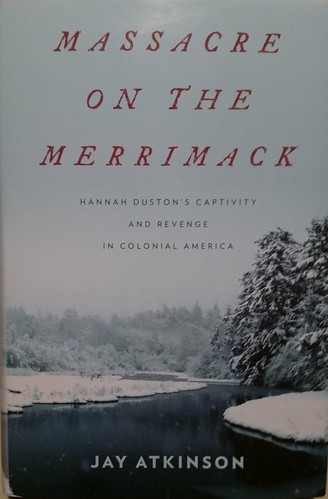 I was up late last night, not to watch the Patriots but to finish reading Massacre on the Merrimack, Jay Atkinson’s excellent new book about Hannah Duston and her encounter with Abenaki warriors along the bank of the Merrimack River in March 1697. The 39 year old Duston had just given birth to her thirteenth child when a native American raiding party in the service of the French in Canada attacked the English frontier settlement of Haverhill, Massachusetts. While her husband led their other children to safety, Duston, her infant, and another Haverhill woman serving as Duston’s nurse were taken captive by the Indians along with other English residents of the town.

The French would “purchase” English captives so the raiders and those they held began the long journey to Quebec through the late winter wilderness. Soon, those unable to keep up, including Duston’s young daughter, were murdered by their captors. After a week of travel, Duston and two others found themselves on an island in the Merrimack near today’s Concord, New Hampshire, held hostage by two of their original captors and their families which added eight women and children to the group. As the Abenakis slept, Duston and her two companions seized hatchets and killed all ten. Taking a canoe, they began a perilous journey down the Merrimack to Haverhill.

In Massacre on the Merrimack, Atkinson does an incredible job of portraying the harshness and brutality of the time while placing it all in the broader historical context of English versus French competition for dominance over North America. Upon her return to Haverhill, Duston became a celebrity for a short time, not in the over-the-top sense of celebrity as we know it today, but more as someone of interest and admiration. She quickly resumed the routine of life on the frontier and lived into her 70s. She had become so unremarkable that her burial site is unknown today.

Hannah Duston’s obscurity did not last. She was “rediscovered” in the years after the American Civil War thanks largely to the work of two Lowell men. Robert Boody Caverly was by profession a lawyer but was also a poet, playwright and historian. Among his works was a book entitled Heroism of Hannah Duston Together with the Indian Wars of New England. Caverly initiated an effort to memorialize Hannah with a statue on the island in the Merrimack on which she had gained her freedom. Caverly raised $6000 for a statue and commission another Lowell man, Joseph Andrews, to sculpt it. A cemetery stone carver, Andrews nonetheless did a masterful job with the Duston statue which was unveiled in 1874.

It’s no coincidence that Hannah Duston’s renaissance came at a time when American expansionism caused brutal conflict with the native Americans in the west (the battle of Little Bighorn came two years after the unveiling). By equating Hannah’s ordeal with the conflict in the west, it provided a more virtuous context for contemporary expansion. More recently, as attitudes towards the subjugation of native Americans in the nineteenth century changed, Hannah fell into disfavor in popular culture.

Atkinson wisely avoids plunging into this modern popular culture conflict and focuses on the story. In the prologue, the author explains that he strove to tell Duston’s story in a “carefully researched narrative.” In that, he certainly succeeds.

If you like adventure novels, buy this book because it sure reads like one. If you like carefully researched history, buy this book. If you are interested in the early history of the region in which we live today, buy this book. So congratulations to Jay Atkinson whose Methuen home is not far from the Duston homestead (Methuen was part of Haverhill back then). Hopefully this book will inspire others (me included) to dig deeper into the early colonial period of our region’s history which is a fascinating but under examined part of our community’s heritage.

One Response to “Massacre on the Merrimack” by Jay Atkinson