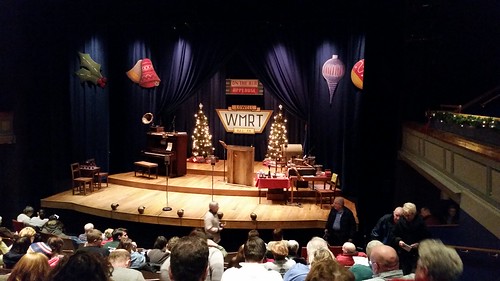 The set of “It’s a Wonderful Life: A Live Radio Play” at MRT

Last night I attended opening night of It’s a Wonderful Life: A Live Radio Play at the Merrimack Repertory Theatre. It was excellent and I urge everyone to check it out, especially if you’re not a regular MRT attendee. Performances run from Wednesdays through Sundays between now and December 20.

Five very versatile actors stage a “live radio” version of the well-known 1946 film that was directed by Frank Capra and starred Jimmy Stewart. The way these actors play multiple roles almost simultaneously while creating their own sound effects creates a nostalgic charm for a time when people gathered around radio sets for entertainment, a period that predates even me. A couple of locally-themed on air advertisements during “breaks” in the radio performance were fun and elicited knowing applause from the full house. Just before the performance began, the play’s director, Megan Sandberg-Zakian, clutching a legal pad and pen, slid into a seat in the corner of the balcony. It was too dark to tell if she was writing much but when the lights came up at the end of the performance, she looked delighted as did everyone else present.

Years ago I was an MRT subscriber, but I found the plays veered off into areas that I found not very interesting so I dropped out of the MRT rotation. This year, at the urging of others, I’ve now caught all three plays that MRT has staged thus far: The Lion, I and You, and now, It’s a Wonderful Life: A Radio Play. So MRT has won me back which makes me happy, because it’s a great resource for Lowell and we should make every effort to support it. Start by ordering your tickets online today. 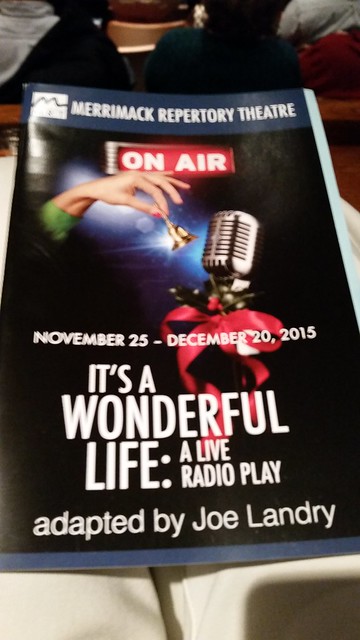