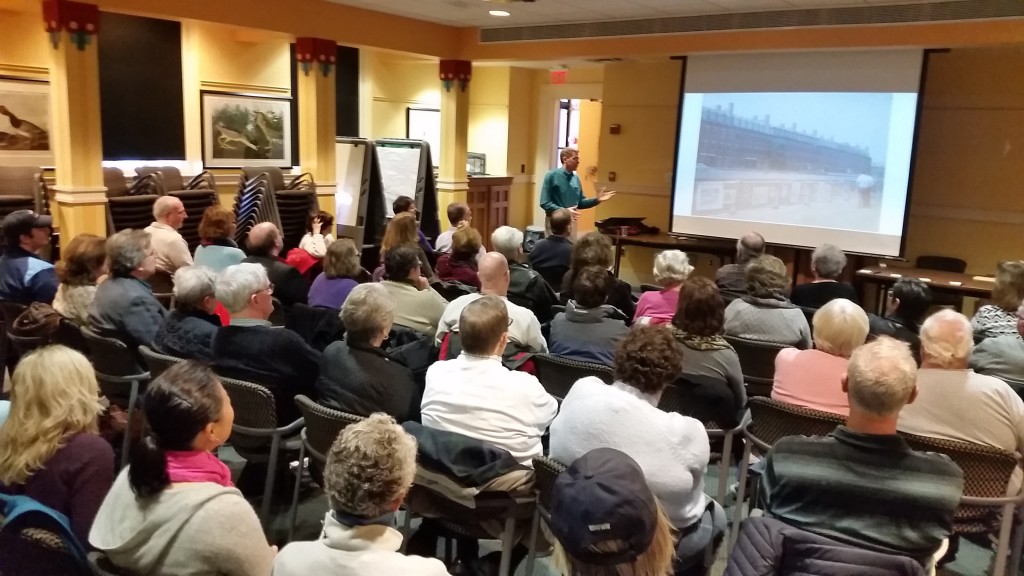 It was a busy week in Lowell, perhaps because not much gets scheduled during the upcoming week, the week of Thanksgiving (although if you’re like me, you have a hard time believing that Thanksgiving is just four days away). 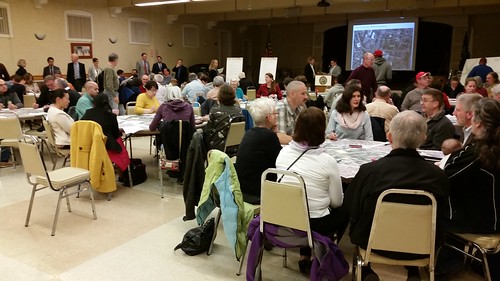 More than 100 people attended the Monday night meeting at the Senior Center on the future of the Lord Overpass (see my post-meeting report here). The city’s Division of Planning and Development organized the event. There was a survey about individual usage and ideas about the Overpass that everyone was asked to complete (hopefully DPD will share the survey results soon). Each person attending was given an overhead, color photograph of the vicinity and each table was equipped with a poster-sized version of that photo.

After some preliminary remarks from local officials, the public participation portion of the meeting began. Rather than forming a line before a single microphone with all others in attendance transformed into a passive audience, DPD positioned attendees in small groups around a dozen tables and supplied a DPD-employee to each group to facilitate the discussion. By this method, each individual had a greater opportunity to share observations and ideas. Hopefully the other facilitators were taking notes as comprehensively as the staffer at my table was doing. If they were, DPD will have a substantial amount of citizen input.

And what was that input? On the macro level, there were pleas to tear the entire Overpass down. I think everyone in attendance, including those who suggested that, knew it was unlikely if not impossible, but explicitly saying tear it down emphasized the displeasure with the Overpass as it is now.

On a more micro level, three suggestions seemed widely favored: (1) make Appleton/Chelmsford Streets and Middlesex Street both two-way as they cross the Overpass. That way, someone driving in-bound on Middlesex or outbound on Appleton could just go straight and not have to navigate portions of the circular Overpass; (2) provide buffer zones of mulch and shrubs between sidewalks and adjacent streets as a way of separating walkers from cars; and (3) gain the space needed for these buffer zones by decreasing the width of all lanes on Thorndike and Dutton. There was grudging acknowledgement that these roads would have to remain two-lane in each direction; by narrowing those lanes, the traffic will be calmer and pedestrians will be safer.

One area that creates continuing concern is the proposed four-way intersection of Fletcher, Dutton, Jackson, and Thorndike. Everyone thinks it’s a good idea to connect those roads, but no one (at least no one who isn’t a traffic engineer or an employee of the city) thinks the proposed layout will work well for vehicles or be safe for pedestrians.

The meeting closed with Craig Thomas, the point person for DPD, saying that the DPD staff and the engineering consultants hired to design this renovation project will digest the public suggestions and will bring them back to us at another public meeting in January or February to unveil the final design.

I have some concerns.

As nice as it was to have a public meeting and to solicit input from the public, there is no guarantee that any of that input will find its way into the final plan. The designers of this project were not selected for their expertise in walkability; they were selected because they are good at designing roads and bridges. That’s what they’ve been trained to do and that’s what they do.

Rather than put the burden for walkability design on untrained members of the public, why can’t the professionals take our clear desire for better walkability and then show us some options? Other cities, other places, have converted 1960s era, hazardous-to-pedestrian roadways into spaces that are safe and convenient for people using every method of transportation, not just cars and trucks. Why can’t we see some examples? It would be nice to have another meeting or series of meeting at which design concepts are shared with the public, rather than just one grand unveiling of the final plan.

Despite not a single council motion on the agenda, last week’s council meeting covered some important items. The report on the possibility of a replacement for the Rourke Bridge from Beverly Woods of the Northern Middlesex Council of Governments was interesting. So was a comment left by Brian, one of our regular contributors, especially on items dealing with walkability and the place of cars in the city. Here is some of what Brian wrote in his comment to my council meeting report:

To my friends in the Highlands: You should be organizing a rally outside the Northern Middlesex Council of Governments to SAY NO to a new 4 lane Rourke Bridge. When you increase capacity of roads you increase congestion. . . More people from Dracut, Tyngsboro, NH etc. will use the bridge as a cut through to RT 3 and 495. Developers will build more cheap tract housing and strip malls in Pawtucketville. You can’t widen Wood St, Drum Hill, or Stevens St so how will the additional cars not increase congestion on those streets?

My own recent experience corroborated much of what Brian asserted. Just that morning, Tuesday, I had jury duty in the Somerville District Court with a report time of 8:15 a.m. Almost any time I go into Boston, I ride the train and then the MBTA, but the directions to the Somerville Court listed a couple of bus lines as the public transportation option so I opted to drive. Leaving Lowell at 6:30 a.m., I soon joined three lanes of bumper-to-bumper traffic heading south on Route 3. As I rolled along at 10 mph, I remembered how a dozen years ago, regional politicians, business leaders, and the mainstream media all proclaimed that “widening Route 3” would bring an economic renaissance to Greater Lowell. I don’t know if that happened; probably not. I do know that after all the work and expense of widening the road, the main difference I see is that I get stuck in rush hour traffic with three cars abreast, rather than the former two cars abreast. So yes, Brian’s comment resonated with me. (As for my jury service, despite sitting in the jury room for the entire morning, none of the cases actually went to trial so we were all dismissed in time for lunch). Building more lanes just means more people will fill up the space, leaving the same traffic problems and a big price tag. To solve traffic problems, better options not more lanes is the answer.

I didn’t watch it but Amy Bisson did and she wrote a full report about it along with some analysis sharpened by her years as a Lowell Public School teacher (she retired last year). With so many members of the school committee leaving the board next month, there is a scramble to finish priority projects so please read Amy’s report.

Congratulations to Lowell Telecommunications Corporation which celebrated its twentieth birthday at its annual meeting held this past Thursday night. I was assigned the task of giving a brief history of LTC. In the process of researching the topic, I discovered and was reminded of many interesting things and will do a separate blog post in the near future about the history of LTC. 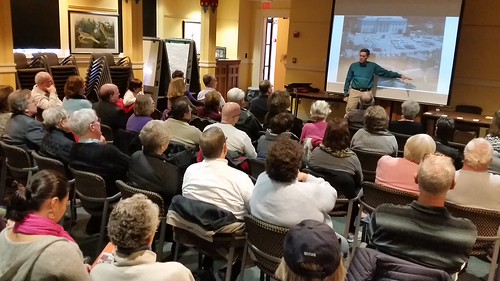 Thanks to the 80+ people who attended my book launch event at the Pollard Memorial Library. The new book, Lowell: Images of Modern America, is a photographic history of Lowell from 1950 to the present. The book is available online from Amazon and at Barnes and Noble stores in Burlington, Nashua, and Salem, NH. 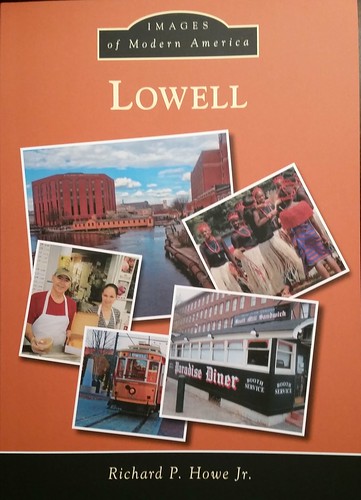 On Saturday, December 12, 2015 at 2 p.m. at the Pollard Memorial Library, the Lowell Historical Society will host a program called “Lowell History Since World War II.” Paul Marion and I will be the speakers and we will both have copies of our respective books (Paul’s is Mill Power, a history of Lowell National Historical Park) available for sale and signing.

Happy Thanksgiving to everyone.