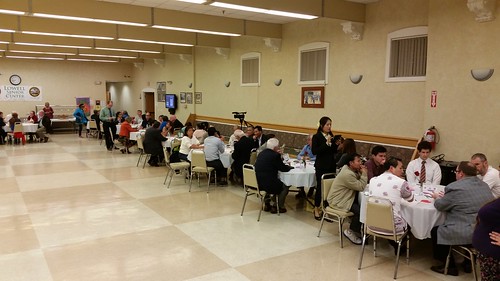 The Coalition for a Better Acre and Lowell Votes combined last night to host an innovative, energetic, and informative Lowell City Council candidate forum. Called “Candi-Dating” the event was a take-off on the concept of “speed dating” at which potential mates rotate from table-to-table for quick talks intended to spark some chemistry.

This election forum was held at the Lowell Senior Center. Round banquet tables were set up along the perimeter walls, and attendees were distributed equally among the tables. The fifteen council candidates who participated were each assigned to a table and then given six minutes to answer questions asked by those sitting there. After six minutes, candidates rotated to the next table and repeated the process. By the end of the night, each candidate had participated in 15 separate mini-forums. 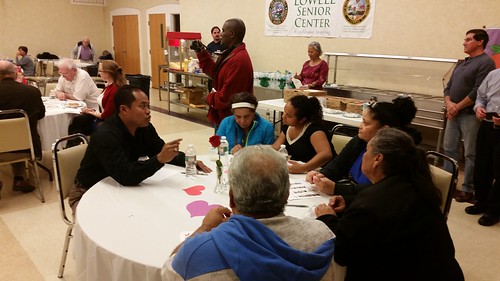 I served as the time keeper/traffic cop whose job was to keep things moving so I did not sit in on any of the discussions. But as I monitored the flow of the discussions around the room, I never once saw a table lacking in vigorous debate with everyone fully engaged. By the time it was over, I’m sure the candidates were exhausted because rather than a typical forum where each speaks for one minute and then sits as the other 17 take their turns, this format required every candidate to be “on” continuously. Same for the voter-participants.

The candidates who participated were (in order of ballot position):

Jim Leary was in Washington on business but participated via Skype.

A similar event for School Committee candidates will be held on Wednesday, October 28, at 6 pm, also at the Senior Center. 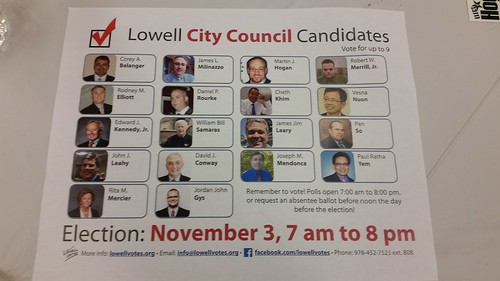