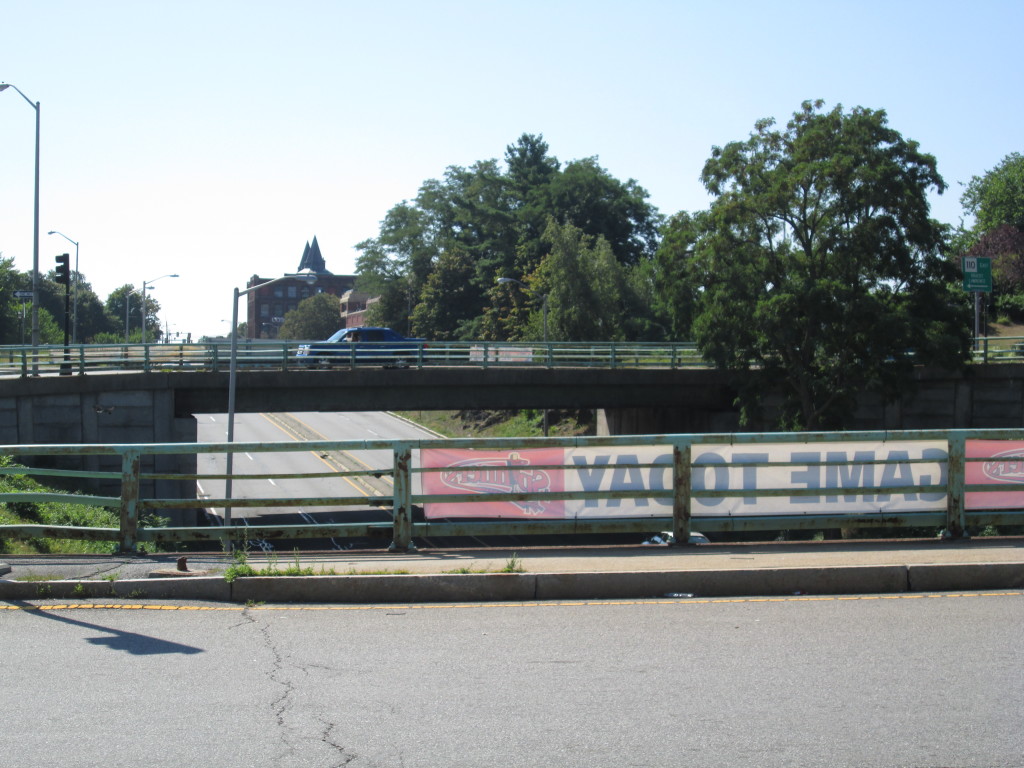 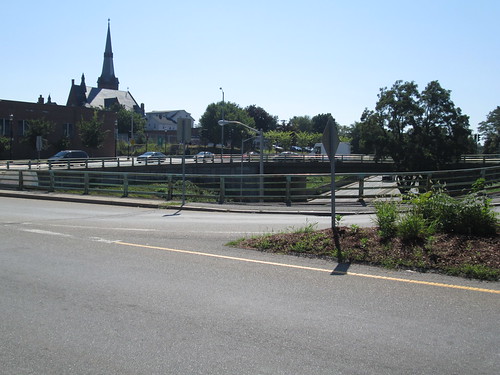 The city council’s traffic subcommittee held a meeting on the Lord Overpass project Tuesday night before the regular city council meeting. There was a presentation by members of the city’s planning department and an opportunity for public input but no one from Mass Highway or the company doing the design work were present. I did wrote a blog post about the meeting that contains more details.

Months ago when the transportation subcommittee last met on this project, personnel from the design company were present and did speak about the process. I left that meeting feeling that a plan was already in place and that plan drew upon decades of road design experience. In other words, the design considerations being employed hadn’t changed much since the Lord Overpass was originally designed. The paramount consideration was to move cars through the area as quickly as possible with people on foot a secondary consideration. There’s a lot of talk about making the area more walker-friendly, but the design doesn’t necessarily reflect that.

But the design has not been finalized an so there is still the opportunity to influence it. A chance to do that will occur on Monday, November 16, 2015 at 6 pm when the Department of Planning and Development will host a public meeting on the Lord Overpass project at the Lowell Senior Center. According to those from DPD at last Tuesday night’s meeting, the November 16 gathering will give the public an opportunity to make suggestions on how the project might be improved. A big turnout on November 16 would put pressure on the contractors and state highway officials to alter the design.
To better acquaint members of the public with the existing Lord Overpass, I am organizing a Lord Overpass Walkabout for Saturday, October 31, 2015 starting at 10 am at Lowell National Historical Park visitor center on Market Street (costumes are optional). The Lord Overpass is the hub of more than a dozen foundational entities in that part of the city. Here’s a list of the places that will be visited on the walk:

So just show up at the NPS visitor center at 10 am on Halloween Day. The walk should take about 90 minutes and will be held rain or shine.

The traffic subcommittee also got an update on efforts to find a safe and legal way to connect Western Avenue Studios with the Dutton/Thorndike area. Right now, a train track separates them. Some people trespass across the tracks between freight trains. Less adventurous take to their cars and drive there via School Street which is both inefficient and irrational.

The train tracks are owned by the MBTA which is agreeable to granting the city air rights over the track for the construction of a pedestrian bridge but is not agreeable to any kind of surface crossing. Councilors instructed DPD to keep pressing for some ground crossing, but I’m of the opinion we should focus on an elevated ramp for walkers and bicyclists.

Tuesday’s city council meeting was a marathon that lasted 3 hours and 17 minutes. A good chunk of the early part of the meeting was spent talking about pedestrian safety on Andover Street. A big focus was on making it safer for students from the Reilly and Sullivan Schools to cross Andover Street on their way to and from their homes. Suggestions ranged from placing an island in the middle of the road to working pedestrian crossing lights.

This particular concern has been before the council repeatedly. Whatever steps have been taken in the past – painted crosswalks, “Yield to Pedestrian” cones in the road – haven’t made much difference. As a concerned parent reported, when the police traffic bureau set up a sting to catch people who failed to yield to pedestrians in the crosswalk, they stopped five cars within five minutes.

I believe that since Andover Street is a state road which means that there are limits on what steps the city can take. Think about it: the same folks who are preventing us from making Andover Street safer for school children to cross are the same people who have the final say on the design of the Lord Overpass.

In the end, the council agreed to study this further and talk about it again at a future meeting.

There were a couple of other motions that suggest councilors are at least thinking about pedestrians. Councilors Belanger and Mercier had a joint motion to ensure that part of the planning process for new schools in Lowell should include creating sidewalks so that children walking to school don’t have to take to the street. Councilor Samaras then had a motion to improve the process by which Middlesex Community College students cross downtown streets when changing classes. Finally, Councilor Rourke had a motion about murals painted on the sides of buildings in the city. There are quite a few of them and he believes that a public/private partnership might turn them into a valuable cultural attraction for the city.

It’s nice to see councilors, through their motions, demonstrate their interest in pedestrian safety and cultural tourism, both critical to making Lowell a better place to live and visit.

Councilor Mercier, at the behest of former Councilor Bud Caulfield, offered a motion to erect a monument on a small parcel of land in the outer Highlands identifying the area as Middlesex Village which is the historic name for that neighborhood. Middlesex Village was settled by English families more than 170 years before Lowell received its town charter. It has a fascinating history, some of which Bud Caulfield touched upon in his remarks at the council meeting. It’s a topic deserving of a separate blog post which I will do later this week.

This coming Wednesday, October 14, from 6 pm to 8 pm at the Lowell Senior Center at 276 Broadway, the Coalition for a Better Acre and Lowell Votes will host the 18 candidates for city council in the political equivalent of a “speed dating” session. The event is called CandiDating! With the audience seated around the room at round banquet tables, the candidates will rotate from table to table, spending a few minutes at each stop talking about issues such as public safety, transportation, taxes, education, snow removal and much more.

CBA and Lowell Votes will hold a similar event for School Committee candidates on
Wednesday, October 28, 2015 at 6pm, also at the Senior Center.

Remember, next Sunday, October 18, 2015, is the Baystate Marathon and Half Marathon here in Lowell. These are great events that bring thousands of people into the city, but they also make driving anywhere near the Merrimack River a challenge and crossing the river in a vehicle nearly impossible. Everyone should plan their Sunday morning accordingly.